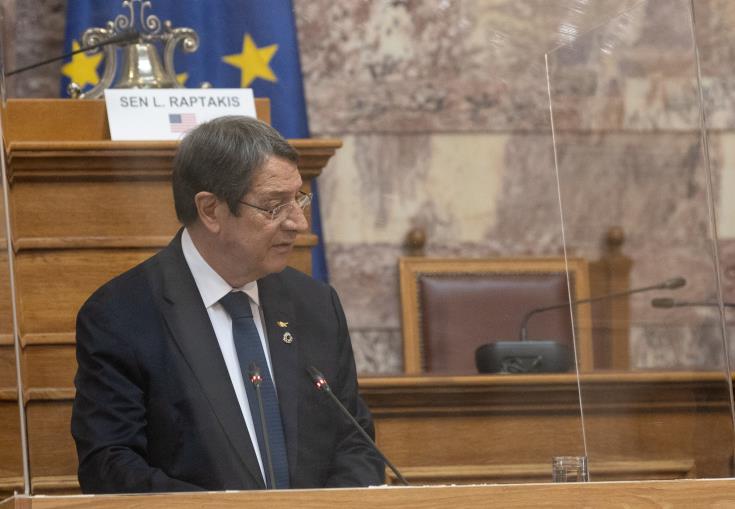 President Anastasiades briefed his counterparts in the European Council about Turkey’s and the Turkish Cypriot side’s recent actions, government spokesperson Marios Pelekanos said in a statement after the first day of the summit in Brussels.

Pelekanos said that the President briefed his counterpart “regarding Turkey’s recent provocative rhetoric and the occupation regime’s new illegal acts in the fenced off area of Famagusta, as well as the creation of other faits accomplis on the ground, Turkey’s unacceptable insistence in promoting an unacceptable two state solution, and also generally Ankara’s aggressive stance towards Cyprus”.

The President also asked that pressure is brought to Turkey in order to behave in a responsible way, which would allow the restart of negotiations towards solving the Cyprus problem on the basis of UN Security Council resolutions.

Pelekanos added that Greek Prime Minister Kyriakos Mitsotakis also briefed his counterparts on Turkey’s aggressive behaviour in the Aegean sea and its threats against the country’s territorial integrity.

The leaders also discussed a proposal by French President Emmanuel Macron to create a European political community which would act as a platform that would allow the EU to face challenges in cooperation with third countries from Europe that share the same democratic principles and values.

Pelekanos said that President Anastasiades argued that one of the basic prerequisites for third countries to participate in such a community will have to be the respect of international law and territorial integrity and sovereignty of all countries.

The government spokesperson also referred to the decision to give Ukraine and Moldova a candidate member status, and to open the way to Georgia given certain conditions are met. Also, he said, the leaders underlined their readiness to grant candidate member status to Bosnia and Herzegovina, granted the country follows through on a number of reforms.