Our aim is to make Cyprus handicrafts an economic activity with prospects, says Commerce Minister 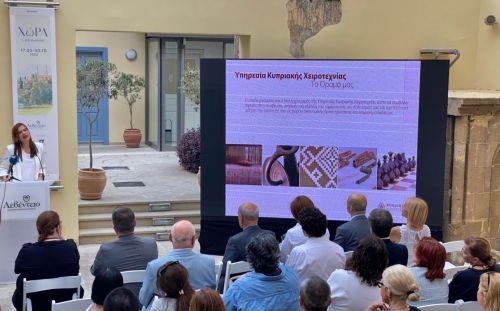 Our aim is to make handicrafts an economic activity with prospects, says Commerce Minister
“The reorganisation of the Cyprus Handicraft Service was born through our effort to save our intangible cultural heritage, to revive it, to promote it and to develop it as a place of economic activity with prospects,” said Minister of Commerce, Natasa Pilides, in an event presenting the work of the Cyprus Handicraft Service during the years 2020 – 2022, that took place in Nicosia, on Monday.

The Commerce Minister referred to the reorganisation and modernisation of the Cyprus Handicrafts Service and noted that the redesign of the strategy for this purpose “has to do not only with what handicrafts are and how handicrafts are produced, but also with how they stand out better, as well as and how we inspire young people to become more involved with the handicraft sector, either as employees, or as customers, or as proud Cypriots who realise the value of Cypriot handicrafts.”

Pilides stated that after the renewal of the corporate identity of the Service, with the creation of the new logo inspired by traditional embroidery, the further upgrade of the Service store in Nicosia takes place, after its recent renovation, and noted that with the transfer of the Service to the Deputy Ministry of Culture could create an interactive space, suitable for educational activities. She also said that the plans include the creation of a modern website and an e-shop.

In addition, the Minister referred to a number of international actions, such as the integration of the Cyprus Craft Service in the World Craft Council Europe and its representation at the opening of the Homo Faber exhibition of the Michelangelo Foundation in Venice. She also mentioned the participation of five Cypriot artists in the 5th Biennale ”Revelations” at the Grand Palais Éphémère at the “Le Banquet” in Paris, as well as synergies between artists, designers and architects, such as the curators of the Cypriot participation in the 17th International Architecture Biennale in Venice.

She noted that craftsmen, in collaboration with designers and artists, can take the Cypriot product to the next level, so that it can emerge as a means of economic activity and entrepreneurship.

Pilides pointed out that a Memorandum of Cooperation that was signed between the Cyprus Handicraft Service and the Human Resource Development Authority of Cyprus is in this direction, that is to say for the provision of standardised educational programmes in three traditional techniques, ceramics, weaving and embroidery. This, as Pilides pointed out, is a decisive step in the great effort made in the last two years to save the intangible cultural heritage of Cyprus and to promote handicrafts as a place of professional career.

As part of the event, the short films created by the international fashion curator, author and editor at large of Vogue Greece, Filep Motwary, which present the evolution of embroidery, ceramics and embroidery, were screened.