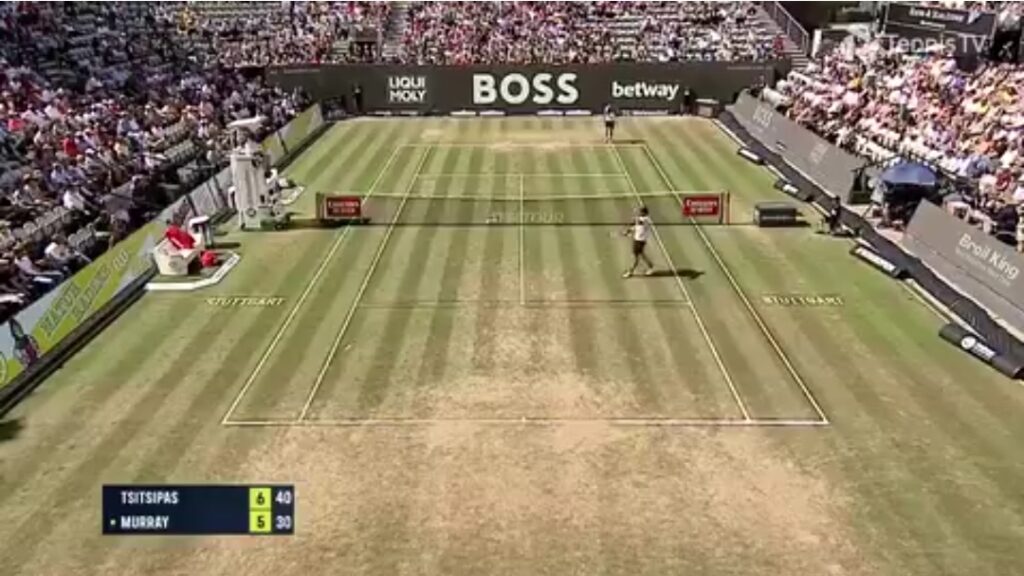 Andy Murray earned his first Top 5 win since 2016 at the BOSS OPEN Friday, upsetting World No. 5 Stefanos Tsitsipas 7-6(4), 6-3 to reach the semi-finals in Stuttgart.

The former World No. 1 showed his grass-court pedigree throughout the one-hour, 40-minute encounter, using his backhand slice to keep the ball low, while he moved inside the baseline to effectively close points at the net.

“It was an amazing atmosphere,” Murray said in his on-court interview. “Almost full crowd. Beautiful weather today, really nice conditions to play tennis… I thought I did well. He served unbelievably in the first set.

“I felt like I had very few chances, but when he was creating chances on my serve, I stayed strong. I played a really solid tie-break and in the second set, once I was in the rallies, I felt like I was dictating a lot of the points. It was a good performance.”

With his standout victory over the Greek, Murray levelled their ATP Head2Head series at 1-1 and improved to 113-23 on grass. The Scot, who saved one set point against Tsitsipas in the first set, is aiming to capture his ninth trophy on the surface and will next play Nick Kyrgios. The Australian, who reached the semi-finals in Houston in April, was leading Marton Fucsovics 7-6(3), 3-0 when the Hungarian retired.

“In the first set he seemed that he was in a groove on his serve. In the first set I wasn’t able to get many opportunities, he was very solid,” Kyrgios said. “I think he really likes the grass. He has had some good results at Wimbledon. I wasn’t feeling that great at the back of the court, but if I am serving 215kmh and hitting the good spots on this court it is almost impossible to return. Hopefully I can bring more of that tomorrow.”

Kyrgios now holds a 27-15 record on grass, having enjoyed a run to the semi-finals at The Queen’s Club in 2018.

Murray’s last victory over a Top 5 opponent came against Novak Djokovic at the Nitto ATP Finals in 2016, the same year he reached his last grass-court singles final (Wimbledon).

The 35-year-old, who opted to miss the bulk of the clay swing to prepare for the grass-court events, is up to No. 53 in the Pepperstone ATP Live Rankings. The last time Murray was inside the Top 50 was in May 2018.

In a tight match, little separated the pair in the first set, with both players strong behind serve. The Scot saved one set point on serve at 5-6, before he found his best level in the tie-break to move ahead. Fuelled by confidence, Murray went on the attack in the second set, gaining the decisive break in the sixth game with a trademark backhand pass. He then held his nerve on serve to gain revenge for his defeat to Tsitsipas at the US Open last year.

Tsitsipas was seeking to win his second title of the season but first career trophy on grass on debut in Stuttgart. The 23-year-old has earned a Tour-leading 35 wins this year, but was unable to consistently find his best level against Murray in front of a lively crowd in Germany.