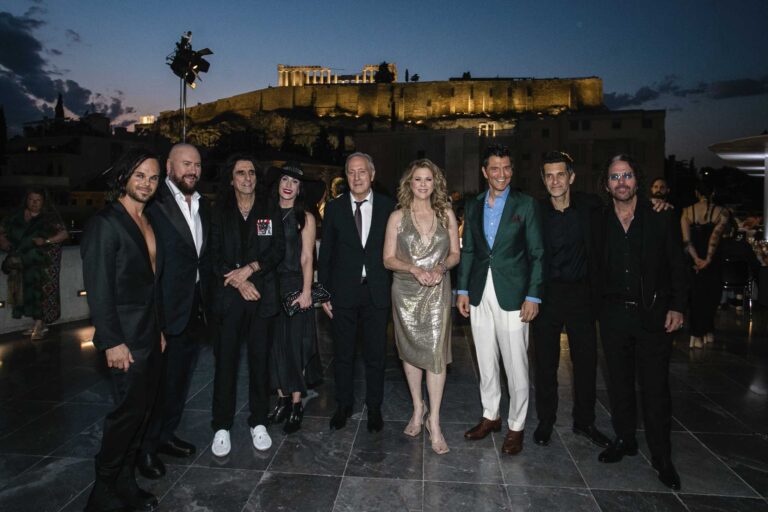 On Sunday 26 June 2022, the Director General of the Acropolis Museum, Prof. Nikos Stampolidis, welcomed and toured with great pleasure, in the exhibition spaces of the Museum, with a number of internationally known music stars. They included Grammy-winning songwriter and producer Desmond Child, Alice Cooper, Rita Wilson, The Rasmus, Kip Winger, Chris Willis, Andreas Carlsson, Tabitha Fair, Phoebus, Sakis Rouvas and Giorgos Lempesis.
This special tour was followed by the DESMOND CHILD ROCKS THE PARTHENON, a concert which took place on Monday 27 June 2022 at the ancient Odeon of Herodes Atticus (Herodion), below the Acropolis, to support the #ReuniteParthenon, under the auspices of the Ministry of Culture and the Municipality of Athens.
The British Committee for the Reunification for the Parthenon Marbles (BCRPM) applauded the event as music ‘gives soul to the universe, wings to the mind’ (Plato).
“Great to see musicians gathering in Athens to support the reunification, we applaud them all.”
Just last week on Monday (20 June 2022) was the 13th anniversary of the Acropolis Museum. BCRPM, with Avgoustinos Galiassos and Greek friends, gathered at the British Museum for a celebration to also ask that the reunification of these sculptures be respectfully considered. “Author and BCRPM member Victoria Hislop did the honours with the birthday cake and happy birthday was sung in both English and Greek,” commented Secretary of the BCRPM, Marlen Godwin. “The Greek version aptly adapted by one of the protesters in Greek to reflect the ask of the day: «Να ζήσεις Μουσείο και χρόνια πολλά, μεγάλο να γίνεις με όλα τα Γλυπτά!», which translated says: “Long live the museum, happy birthday, may you grow older with all of your sculptures reunited!”
“We also remember the superb song written and performed by Hellena in the British Museum’s Room 18, on the Acropolis Museum’s 10th birthday. To listen to that song visit www.youtube.com/watch?v=s-EkNkxl3-A. We are looking at organising additional music events, and to seeing the sculptures reunited in the Acropolis Museum, for all the right reasons.”
George Osborne, Chair of the British Museum, was talking to Andrew Marr on LBC when he said that a ‘deal could be done’ on the Parthenon Sculptures and that this might involve a loan but to do so, Greece has to acknowledge UK’s ownership. This acceptance of ownership is not possible for Greece as these sculptures were removed when Greece, under Ottoman rule, had no voice.
If George Osborne is genuinely hoping to open discussion to broker a deal, ‘without any red lines’, then that should include this question of the BM’s ownership. And if dialogue, which is what UNESCO has been patiently asking for, begins in earnest, and in all seriousness – there is no reason for the mountain to climb to be scaled by both museums, and in unison.
The win-win is for the Acropolis Museum to reunite the fragmented, surviving sculptures (emblematic sculptures from the Parthenon) and for the BM to continue to be able to use Room 18 to offer its visitors ‘insights into how ancient Greece influenced and was influenced by other civilisations it encountered’. The latter, that is BM’s Room 18, can continue to deliver such insights with other exemplars from Greece. The British Museum the British Museum holds 108,184 Greek artefacts, of which only 6,493 are even on display.
If the dialogue may start to facilitate a loan without the pre-condition of ownership from the BM, this could be the start of respectful dialogue with Greece.