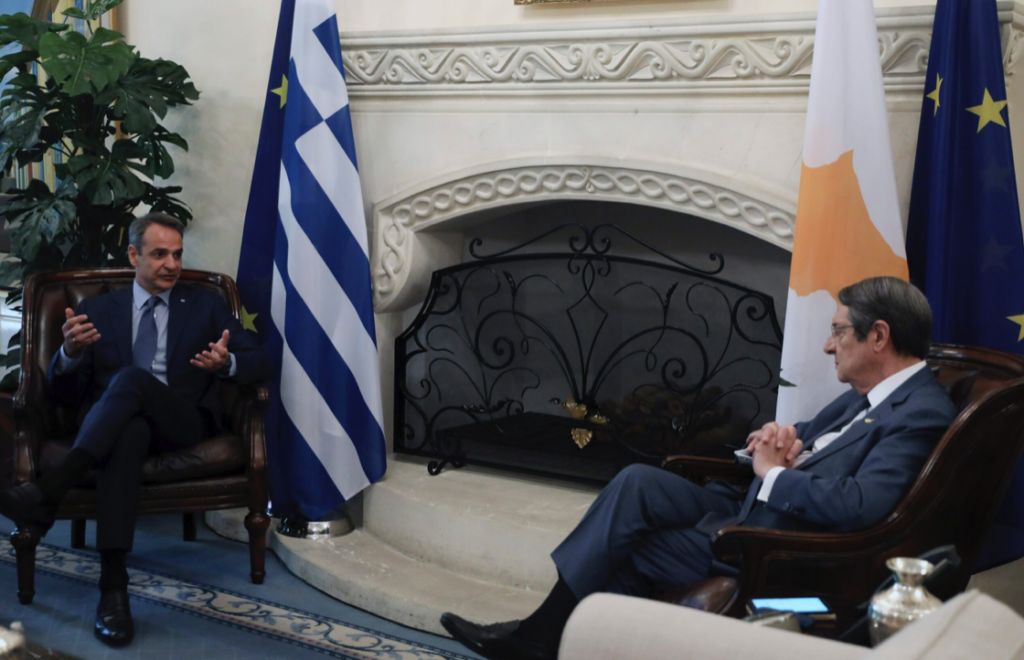 The leaders of Greece and Cyprus sought Friday to tamp down tensions with neighboring Turkey amid increasingly belligerent rhetoric from the Turkish president, insisting that the best way to counter such talk is through “calm and composed determination.”

“The defense of Greece and Cyprus against whichever revisionist tendencies is international law, our strong alliances and our membership in the European family, and with calm determination and composure we will always counter whichever rhetoric exceeds proper diplomatic” boundaries,” Mitsotakis said during a meeting with Cypriot President Nicos Anastasiades.

“I surmise that this approach is in the end the correct one and that we will soon return to calmer waters, always keeping open channels of communication that in my view should never close, even under the most difficult circumstances.”

Turkey and Greece have a long history of disputes over a range of issues, including mineral exploration in the eastern Mediterranean and and rival claims in the Aegean Sea.

The two countries have also been at odds over ethnically divided Cyprus which Turkey doesn’t recognize as a state. It claims much of the island nation’s offshore economic zone where natural gas deposits have been discovered.

Cyprus was split in 1974 when Turkey invaded following a coup aiming at union with Greece. Only Turkey recognizes a Turkish Cypriot declaration of independence in the island’s northern third.

Greek-Turkish tensions surged last week when Turkish President Recep Tayyip Erdogan warned Greece to demilitarize its islands in the Aegean, saying he was “not joking.” He spoke during Turkish military exercises near the islands, including an amphibious landing scenario.

The government in Ankara says Athens has built a military presence on the Aegean islands in violation of 20th century treaties that ceded the islands to Greece after a long period of occupation by Turks — or in the case of Rhodes and Kos, by Italy.

Greece counters that the islands need defenses given threats of war from Turkey, which has NATO’s second-biggest military and maintains a large landing fleet on its Aegean coast.

State Department Spokesman Ned Price on Thursday urged the NATO allies to resolve differences diplomatically and to “avoid any rhetoric that could further raise tensions.”

The Greek and Turkish defense ministers met on the sidelines of a NATO meeting Thursday in an effort to talk things out.