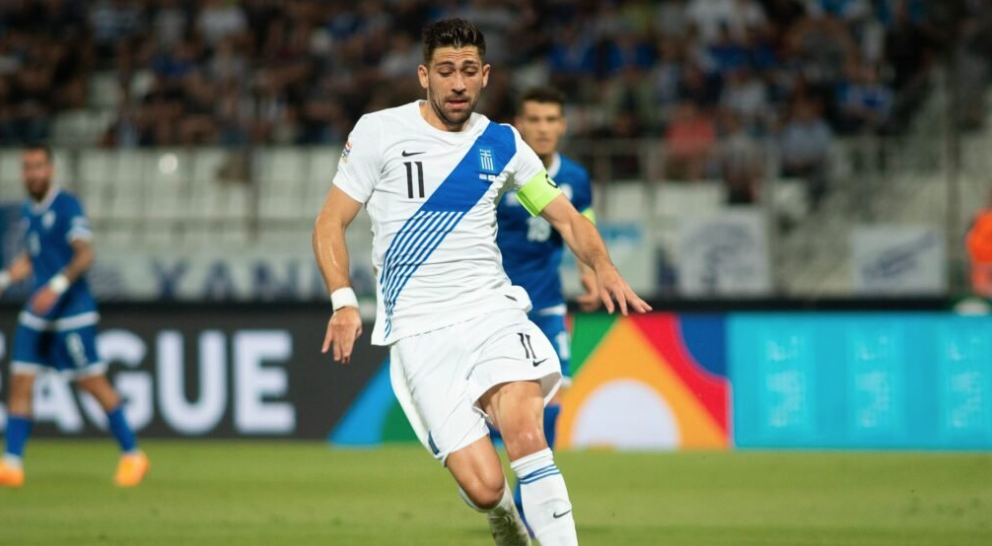 Greece kept to its winning ways in Group J of the UEFA Nations League when it hosted Cyprus at the Panthessaliko Stadium in Volos early this morning and once again its Captain Marvel, Anastasios Bakasetas, opened the scoring in the eighth minute.

Liverpool based roving left back Kostas Tsimikas started the move when he took the ball right into the Cyprus penalty area, his cross was intercepted by the head of Cyprus defender Nicholas Ioannou which arced into the path of Bakasetas, his first touch, eight minutes from the start, was a volley that ended in the back of the Cypriot net. His third goal in as many games.

Cyprus forward Loizos Louizou threatened down the left and crossed to Ioannou who could not control the ball near the Greek goal and lost the chance to redeem himself and equalise for Cyprus.

Bakasetas was back in the thick of things when he pounced on a poor pass from a Cypriot defender to feed the ball to Vangelis Pavlidis who rifled the shot into goal to make it to 2-0 at the 20 minute mark.

Cyprus again came dangerously close to scoring when Charalambos Kyriakou sent a probing long ball that opened the Greek defence but Ioannis Pittas failed to convert the cross to him which he shot just wide of a vulnerable Greek goalmouth.

Early in the second half, Greece’s Dimitris Limnios made it 3-0. The midfielder was later stretchered off the field and the Greeks finished the game with 10 men. Pantelis Hatzidiakos also picked up an injury during the game.

In the other Group J game, hosts Kosovo beat Northern Ireland 3-2. Verdat Muriqi opened the scoring with a penalty in the ninth minute. Team mate Zymer Bytiqi scored in the 19th minute.

Greece face Kosovo at 4.45am (AEST) on Monday and a win will see the Greeks through to the play-offs with two games to spare.