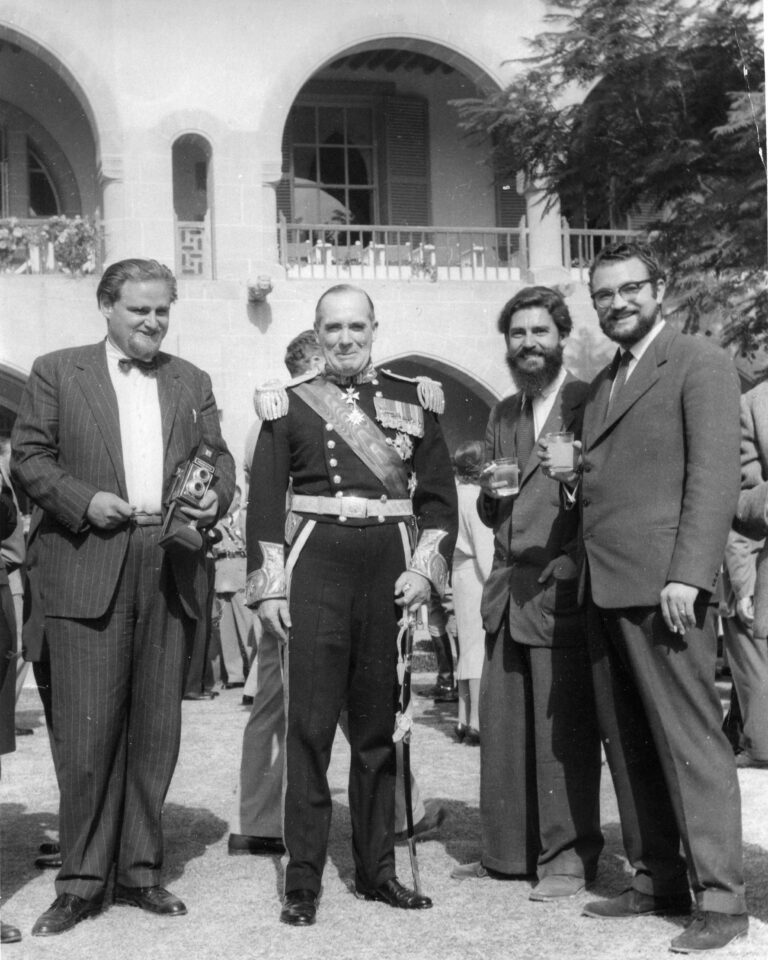 Photo: August 16th 1960 – Independence Day. Last Governor Sir Hugh Foot poses with journalists Robert Egby, Alex Eftyvoulou and George Lanitis on the lawn at Government House, Nicosia.
George Lanitis’ Cyprus: Island of Aphrodite – published in 1965, was one of the first ambitious artis-tic efforts in producing a photographic book on Cyprus. In a hefty volume divided in three-sections appropriately titled The Place, The People and Tradition, Lanitis attempts to encapsulate the visual es-sence of 1960s Cyprus; a visual testament to an ethno-national and romantic vision of the island.

57 years on, Cyprus: Island of Aphrodite manifests both as an artistic and historical artefact, a seg-ment of a ‘curated’ archive of Cypriot imagery, a tactile and conceptual point of departure for this pro-ject.
When in 2017 the Lanitis family granted access to the Cyprus University of Technology to digitize his surviving photographic archive, the artists Theopisti Stylianou-Lambert and Nicolas Lambouris were faced with a vast number of photographs that were simultaneously familiar, peculiar, personal at times, yet distinctively Cypriot.
After spending months viewing and studying Lanitis’ archive, while also considering the pages of the original book for possible visual connections and interventions, the artists settled on their own selec-tions, exclusions and visual juxtapositions for a new photobook.
Cyprus: Island of Aphrodite II, published in 2020, is Stylianou-Lambert’s and Lambouris’ attempt to renegotiate their own visual past and a tribute to the creative process of photographic selection, exclu-sion and erasure.
In what becomes an extended photographic act, the 1965 book is meticulously reproduced, only this time, ‘new’ photographs – photographs from Lanitis’ archive – are introduced and partially overlaid on top of the original pages; all the while, remaining aware of the fact that the mere act of overlaying ma-terial necessitates a much more violent act, that of erasure.
As sociologist Andreas Panayiotou mentions in the introduction of Cyprus: Island of Aphrodite II: ‘The imposition of one picture on the other may shock the eye, and feel like a violation. The eye can-not see the older image in its totality. It can imagine it. But the artistic intervention is not only a nega-tion. It is also a continuation. This is a book in which artists of the 21st century create a new paradox by adding archival photos, as if in a collage, to older, classical by now, “sacred” images.’
In appropriating the 1965 Cyprus: Island of Aphrodite, Stylianou-Lambert and Lambouris approached the original book as a complete artifact, a work in its own right, carefully considering issues of repro-duction, materiality and book design.
Working closely with Artemis Eleftheriadou, IAPT Press’ editor and art director, the 2020 Cyprus Island of Aphrodite II, reproduces the original in its entirety making sure that the viewer can distin-guish the two layers, old and new. The resulting book is an alternative view of a past Cyprus; one that reveals omitted images and focuses on the politics of the everyday.
View the 1965 film Island of Aphrodite; CyBC’s first colour documentary film on YouTube.

Cyprus: Island of Aphrodite was published by Lanitis in 1965. He was only twenty-nine at the time and already making a name for himself as a competent filmmaker, photographer and journalist.
In the early 1960s, Lanitis travelled around Cyprus with his good friend and renowned Cypriot artist, George Pol Georgiou. While Pol Georgiou made sketches and drawings at every stop, Lanitis took photographs with his trusted Leica camera.
There are some truly extraordinary photographs in the book. So many wonderful faces and places.
George Lanitis was born in Famagusta on 23rd February 1936 to Nikolas and Anastasia Lanitis.
He grew up in Nicosia where he attended the Pancyprian Gymnasium during the 1950s. At the age of seventeen (1953), he organised the first photographic exhibition to be held by any school in Cyprus.
After completing secondary school, Lanitis went to England where he studied Communication and Arts at the University of London.
At some point, he met legendary photographer Henri Cartier-Bresson who inspired him to become a photojournalist. In the pursuit of his amazing career, Lanitis has photographed some truly extraordi-nary people, including. Archbishop Makarios, Winston Churchill, General De Gaulle, Nehru, Mao Tsedong, Indira Ghandi, Pablo Picasso, Marilyn Monroe, Lawrence Olivier and Queen Elisabeth II. (Where are these photographs and where they ever published?)
He returned to Cyprus in the late 1950s. It must have been around this time when he met and married his first wife Myra.
In 1957, he was hired by the Cypriot Radio Service (now Cyprus Broadcasting Corporation (CyBC).
Sometime during the 1950s, Lanitis settled in the village of Bellapais where he met and became good friends with Laurence Durrell (of Bitter Lemons fame).
In 1960, he founded the Cyprus Photographic Society and contributed to the promotion of photo-graphic art in Cyprus.
He worked for the BBC for a short while before becoming a cinematographer, director, producer and head of a RIK film crew. He is credited with directing about 15 films with some winning major awards.
In 1964, he won first prize at the New York International Photography Exhibition. The following year, he organised the first large solo photo exhibition in Cyprus.
He edited and published the Cyprus Diplomatist (monthly magazine) and for over 24 years he was a regular columnist for The Cyprus Weekly.
As a respected cinematographer, Lanitis accompanied President Makarios on many trips to Europe, Asia and other parts of the world.
Lanitis lived in the village of Bellapais until the Turkish invasion in July 1974 uprooted his life and dramatically changed his world forever. He fled to Nicosia, seeking sanctuary at the Hilton Hotel for a while before eventually moving to the village of Psevdas.
It is reported that Lanitis lost everything he owned in July, 1974. This included thousands of nega-tives, all his archives, countless photographs, his equipment, his books and his antiques. Utterly grief-stricken, he gave up photography professionally for several years.
In 1979, Lanitis met Androulla (also a prominent figure in the Cyprus community. She was initially the director of the Public Information Office and later moved on to the Foreign Ministry’s department of press and public relations) whom he married a year later.
In an interview with the Cyprus Reporter, Androulla described her husband as a cultured, exuberant, sociable and pleasant man with a good sense of humour. “I was impressed by his enthusiasm and passion for what he did,” she said. “He was very hospitable, loved good wine, good food and our house was always open for acquaintances and friends. He even taught me how to cook.”
Androulla went on to say that Lanitis had social sensitivities and strong views on various issues, such as the environment, the position of women in political and social life, animal welfare and much more, which he was able to express freely through his column in The Cyprus Weekly.
George and Androulla Lanitis lived in Psevdas village, Larnaca, where he maintained his working studio and a small gallery.
In 2004, the President of the Republic of Cyprus awarded George Lanitis the highest cultural distinc-tion for his contribution to the Arts. Sadly, a year later, in May 2005, George Lanitis passed away at the age of 69.
A few days before his passing, the Ministry of Education and Culture had published an album titled ‘George Lanitis – 50 Years of Photography’ in recognition of his vast and significant contribution in the field of the Arts.
Please contact Costas Emmanuelle if you knew George Lanitis or if you can shed any information about his life. He is especially interested in Lanitis’ early years and his early photography.
[email protected]

In his own words

In 1982, George had his first solo exhibition, a period when he began experimenting again with pho-tography and movement. It is after this exhibition that George wrote: “I did not touch a camera seri-ously for years. I created many pictures in my mind but never photographed them. I wanted to do something that hadn’t been done before; something beyond the medium of still photography, where I could combine my knowledge of Cinematography with still photography. This moment came in 1980, in Long Island, USA.
“I gently started moving my old Leica, as I photographed the soft autumn colours that are so distinc-tive around New York. I took a set of pictures to the Museum of Modern Art in New York and showed them to people.
“Are these works by Francis Bacon?” somebody asked, and I thought how cruel the Americans were. It was, in fact, an American compliment and I was encouraged to carry on. That was the beginning of introducing movement into still photography, which gave me great pleasure.
My exhibition in Nicosia gave me the satisfaction of knowing that my compatriots appreciated this unearthly form of photography, which was inspired largely by the poetry of T.S. Eliot.
Suddenly, my photography was resurrected and I received invitations for exhibitions in Europe, Asia and Africa. The Federation International de l’Art Photographique awarded me the title of Maître on the basis of this work and I found my way into prestigious museums and galleries in Europe.”

The original foreword for Cyprus: Island of Aphrodite by Dilys Powell

It is always a pleasure to recognise friends and friendly places, and Mr Lanitis’ beautiful photographs of Cyprus have given me moments of pure delight; for here are the figures and the scenes I know. I have travelled by the bus which you see standing in the village street. Only the other day, it seems, I was talking to the solitary man treading his grapes. The girl holding the pack-animal and the goat is an acquaintance of mine. And so it goes on, memory after memory from this land of vineyards and or-ange-groves and majestic landscapes: the graceful lines of the caique in the harbour; the immemorial gestures of the net-mender, the potter, the reaper; the proud authority of the church. It is a land of con-trast: on the one hand the headless antique figure by the ruined columns, on the other the neon lights and the cup on the table in the town cafe; not only the monumental groups of black-scarfed village women but the elegances of high fashion on the beach or in the city; both the hands which tend the grapes, and the machines which suddenly bring together tradition and the new world of technology. Especially it is a land of unforgettable faces: the grave child, the old wrinkled women, the smiling old man.
After this book I begin to fancy that I have known Cyprus all my life. 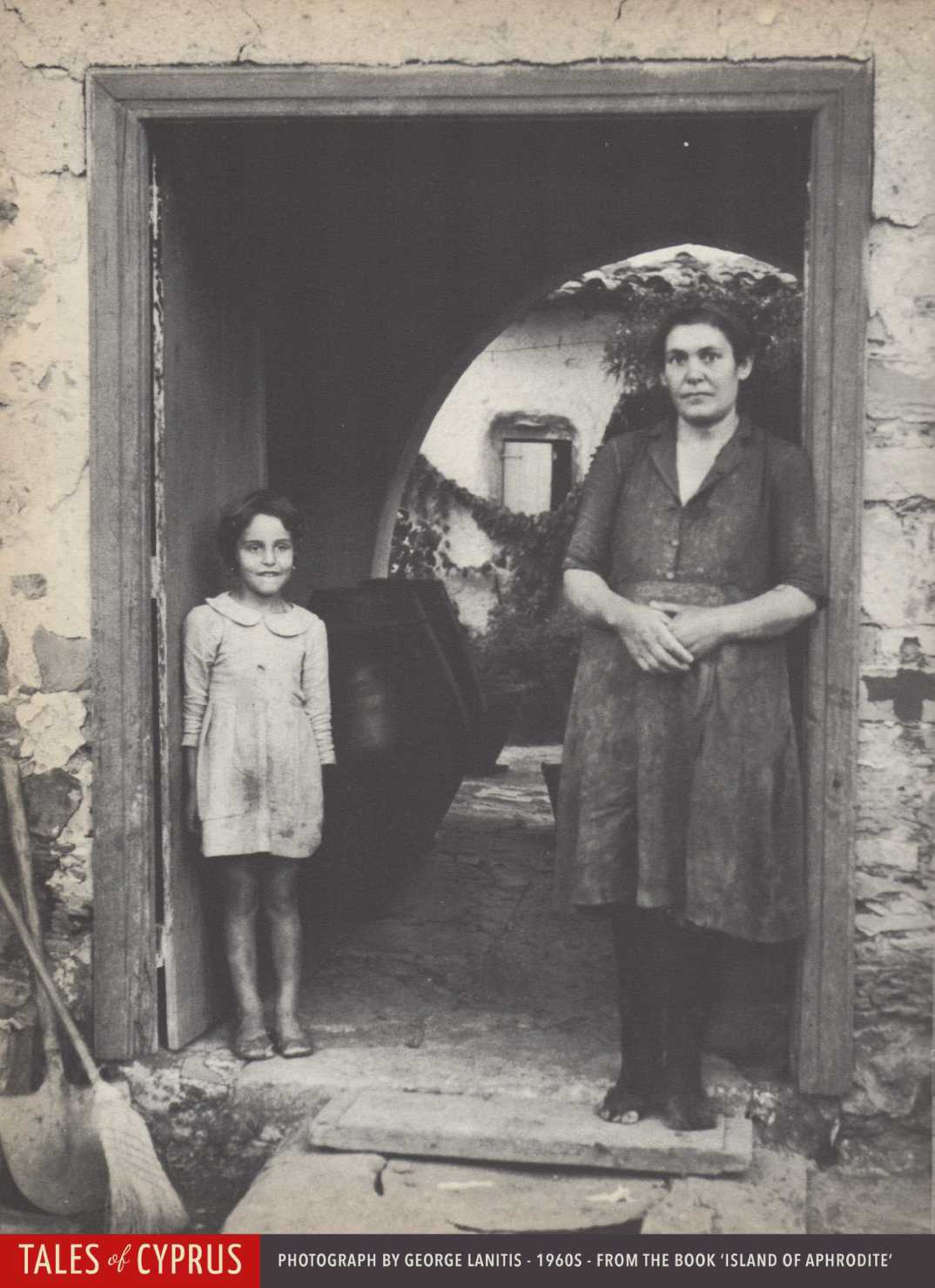 Elizabeth Dilys Powell, CBE (1901 – 1995) was a British film critic, travel writer and philhellene who contributed to The Sunday Times for more than 50 years. She wrote several books on films and her travels in Greece.
Photos: Mother and daughter – Kornos village.
I find this photograph so poignant – maybe because I have similar photos from my youth and I’m sure in most photo albums all over Cyprus. Do you recognise these people – it would be good to put a name to them. Please email me if you do.