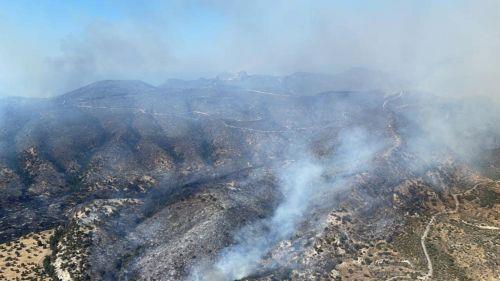 Two fire fighting jets from Israel were expected to arrive in Cyprus on Thursday to contribute to efforts to put out a large fire still raging in the eastern part of the Kyrenia mountain range in the Turkish occupied areas of Cyprus.

The Republic of Cyprus is already helping out in the effort to put out the blaze with two firefighting planes.

The statement was made to CNA by Director of the Forestry Department Charalambos Alexandrou who said the Cyprus Republic is ready to assist with ground forces, if it is requested to do so.

In his remarks, he said that a transport aircraft was already in Cyprus from Israel and the two firefighting planes were expected to land at around 1100. All firefighting operations will be carried out in coordination with UNFICYP, he added.

He further said that the Republic is ready to send a ground force of up to 40 people to help in putting out the blaze, raging since Tuesday. Alexandrou said ground forces are necessary to control the fire and this cannot be achieved by merely using aircraft.

The volunteers would be made up of members of the Fire and Civil Defence services.