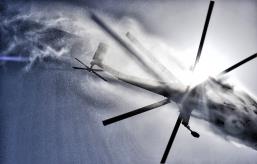 She said that the Department of Forests received a request for assistance in support of the firefighting effort in occupied Kantara, adding that after evaluation of the situation, the Forest Department decided to send two aircraft to the occupied areas.

“It goes without saying that we are always ready and willing to help,” she said.

Firefighting aircraft from the UN and Turkey also contribute to the efforts.