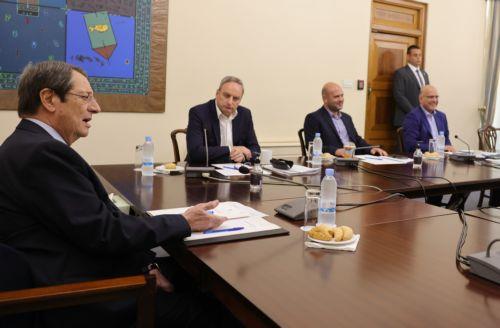 Cyprus President Nicos Anastasiades intends to send letters to the UN Secretary General, the EU, the guarantor powers and the US to inform them on the illegal protocol of economic and fiscal cooperation Turkey has signed with the regime in the island’s occupied areas.

He will also brief them on the rejection of Confidence Building Measures (CBMs) he put forward by the Turkish side, the Government Spokesperson Marios Pelekanos said on Monday, following a meeting of the National Council.

Pelekanos said that the President discussed with political leaders the new provocations by Turkey and Cyprus’ coordination with Greece to address the new situation. According to the Spokesperson the President will thoroughly study what is included in this new illegal protocol and will brief the international community.

Pelekanos said that the political leaders expressed their views, adding that the meeting was held in a good and constructive atmosphere. He also said that they exchanged views on the reforms that need to be pursued so that the Cyprus government could secure funding from the EU’s recovery and resilience mechanism.

The Spokesperson said that a new meeting will follow chaired by the Finance Minister on the issue.

Replying to a question about the letters the President will send, Pelekanos said that although the other side has refused to discuss the CBMs, the government and our side will continue their efforts in order for Ankara to terminate its illegal activities and for the Cyprus problem to be put in track for solution. He noted that we will not withdraw the CBMs from the table and that the issue of sanctions is still being discussed.

Cyprus has been divided since 1974 when Turkish troops invaded and occupied the island`s northern third. Numerous rounds of talks under UN aegis to reunite the island under a federal roof failed to yield results.