Cyprus, he said, will not fall into the trap of Turkish President’s revisionist rhetoric. 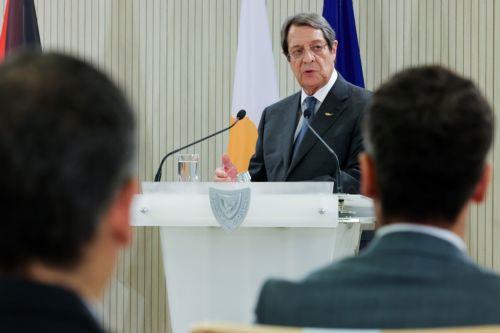 Turkey’s stance vis-a-vis Varoshia is the epitome of revisionism, President of the Republic of Cyprus Nicos Anastasiades has said invited to comment on recent statements by Turkish Foreign Minister Mevlut Cavusoglou. Cyprus, he said, will not fall into the trap of Turkish President’s revisionist rhetoric.

President Anastasiades was speaking to the Press upon arrival at the French Ambassador’s residence in Nicosia, where he was to attend an official lunch, on the occasion of the conclusion of the French Presidency of the EU.

The latest statements by the Turkish Minister of Foreign Affairs, Mevlut Cavousoglou, consist adaptation of revisionist rhetoric and interpretation of international law at will, President Anastasiades said.

“We cannot be dragged into a revisionist rhetoric, one that the Turkish President adopts to serve his own purposes,” he added. The President reiterated that the Republic of Cyprus maintains its firm position of respect to the international law and diplomatic actions.

Invited to comment on a statement by Cavousoglou about the illegal reopening of the fenced off part of Varosha and that Greek Cypriot side thinks that placing few sunbeds on a beach is a threat to international security and violation of international law, the President said that “the usurpation of property is not a matter of 2-3 sunbeds”. He also said that they had 14% of property in Cyprus before 1974, but Turkey has occupied 37% of the Republic of Cyprus since its invasion. He added that it takes a lot of nerve to only speak about “2-3 sunbeds” and concluded that “this is the epitome of extreme revisionism, of a big idea, based only on the political needs of the Turkish President”.