Cypriot scientist Kypros Nicolaides calls US decision to ban abortions “incredible”, efforts to overturn it may take a generation he says 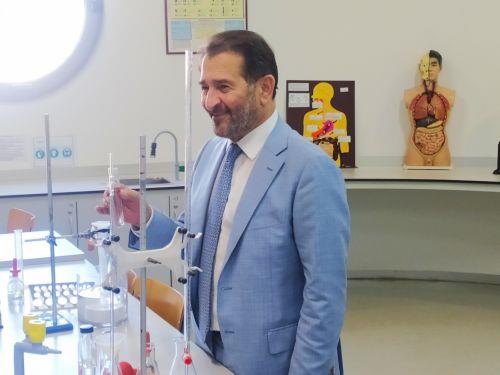 The US decision to ban abortions is incredible, said the world-renowned Cypriot scientist, Dr. Kypros Nicolaides, adding that efforts to overturn the decision may take an entire generation. Nicolaides gave a lecture on Saturday, in Nicosia, at the English School, from which he graduated in 1971. The event was attended by 100 students of the English School, as well as classmates of Dr. Nicolaides.

The lecture of the scientist, who comes from Paphos, was entitled “My journey in Fetal Medicine”. Dr. Nicolaides presented the course he has taken in the field, referring to the most important stations of his research path from the 1970s until today. Indicatively, he referred to the progress made in the diagnosis of Down syndrome in foetuses, in the prediction and prevention of preeclampsia and premature birth, citing several examples from his patients.

Asked about the US Supreme Court’s decision to ban abortions, Nicolaides said that the democratic right of 70% of American women to abortion has been restricted, either because they were raped or because they did not want to get pregnant, or because their child had an abnormality. “The decision of the most advanced democracy in the world to deprive the most basic democratic right of 70% of the population is incredible. That says a lot about democracy,” he added. He also noted that an “enormous effort” must be made to overturn this decision, which will take an entire generation, because six of the nine judges of the Supreme Court in the United States are super-conservative. The South American states, he explained, are conservative. “The more conservative they are, the more likely they are to deny women the right to choose,” he said.

Asked how he felt about his presence at the English School, 51 years after graduation, he said he was extremely proud to be back at school and said he was particularly excited about the enthusiasm of students and teachers. “The most important thing is that I feel proud because I am Cypriot,” he added.

Answering a question about the English School, he said the school has given him “very pleasant memories” and that it has an excellent scientific level. Asked if he had Cypriot students who studied with him, he noted that his charity foundation offers 80 scholarships to students, including Greek Cypriots and Turkish Cypriots.

Given that Dr. Nicolaides specialises in fetal medicine and prenatal surgery, when asked about his future research, he replied that he will continue research especially in the field of preeclampsia and preterm birth which are, as he said, the most important problems leading to deaths of mothers and children.

On her part, Popi Kanari, director of the Karaiskakio Foundation and a classmate of Dr. Nicolaides, said that “it is our pleasure and honour to have him in the team of our classmates.” “We have always felt Kypros very close to us,” she said, adding that Dr. Nicolaides was a resourceful student, always wanting to research and see outside the box. “I am not surprised that he had these successes. He makes us very happy and we wish him good health and to move forward, because he still has a lot to offer with his experience, but more with the passion that he possesses”, she concluded.

One Response to Cypriot scientist Kypros Nicolaides calls US decision to ban abortions “incredible”, efforts to overturn it may take a generation he says