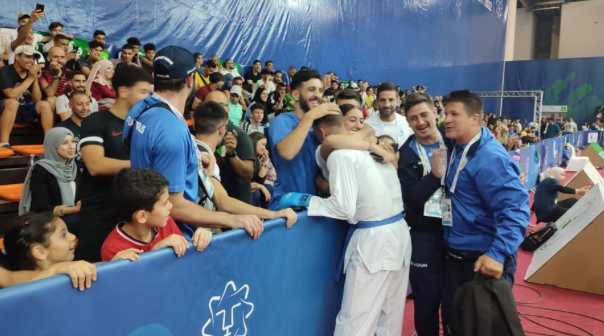 Cyprus’ participation in the Mediterranean Games in Oran started with a success, as Markos Tsangaras won the bronze medal in karate in the -67 kg category, winning 5-4 against French champion Salmi.

As reported by the Cyprus Sports Writers Union correspondent, this is the first time that Cyprus has won a medal in this sport at the Mediterranean Games.

Apart from Tsangaras, five other Cypriot athletes competed in karate on Sunday. Arianne Miles Gonzalez lost against Turkish champion Tugba in the -55 kg semi-final, Anthi Stylianou lost at -61 kg against Italian Mangiacapra and finished in 5th place, Christos Theopemptou lost in the first match at -60 kg, Panagiotis Loizides was defeated by Bosnian Hamza 4-0 and finished 7th, while Irini Kontou was eliminated in her first match, losing 1-0 to Slovenian Harbel.

The Cypriot karate delegation will complete its games programme on Tuesday 27 June with Matthaios Stylianou in the +84kg category, and Dimitris Dimitriades at -84kg.