Assassin: The day the music died 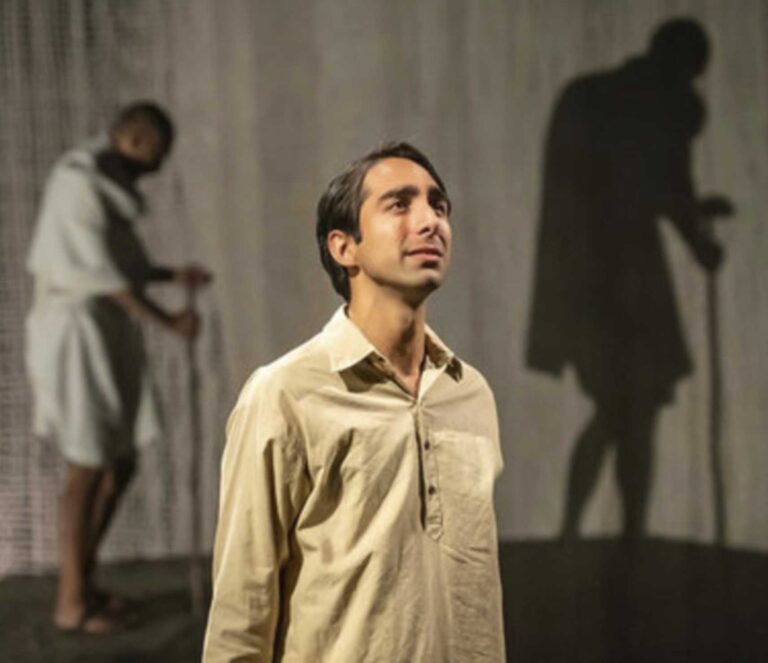 Assassin: The day the music died

The Father and the Assassin, National Theatre

‘India is a rascal that’s been around 10,000 years. The British had no idea what they were dealing with.’
– Overheard at the National Theatre

Nathuram Godse was hanged on 15th November 1949 at Ambala Central Jail, East Punjab, India. He was tried and found guilty of the assassination of Mohandas Gandhi on 30th January 1948.
His life is brought vividly to the stage with an astounding play by Anupama Chandrasekhar. The Father and the Assassin is a damned good evening. Chandrasekhar is one of India’s most exciting playwrights, and takes this compelling backdrop of the birth of a nation, to explain Godse’s upbringing, political awakening and tragic destiny.
Godse’s parents had three sons before he was born, all of whom died early in childhood. Believing that boys were cursed in their family, they brought up Godse for a few years as a girl. His identity was confused until he found politics and nationalism.
Godse had plotted the assassination with Narayan Apte and six others. After a trial that lasted over a year, Godse was sentenced to death on 8th November 1949. Although pleas for clemency were made by Gandhi’s two sons, Manilal and Ramdas Gandhi, they were turned down by India’s Prime Minister Jawaharlal Nehru, Deputy Prime Minister Vallabhbhai Patel.

Gandhi was known as the father of the nation. He was pragmatic, head-strong but also understood symbolism and the Indian village psyche. After air and water, salt is a basic human need. Homer said its properties were divine. Gandhi’s famous salt march started out with just 80 followers, but then turned into a 60,000 strong juggernaut. It was peaceful resistance like this that drove out the British, in favour of swaraj – home rule.
To others, Gandhi was a traitor. ‘Every birth requires blood, Mr Gandhi’, so said Muhammad Ali Jinnah, the father of Pakistan. Gandhi was unable to convince Nehru, Patel and Jinnah that Muslims and Hindus had co-existed for thousands of years, and should continue to do so, and reluctantly allowed for the creation of Pakistan. It was giving Indian land to this new Muslim nation, at the moment India itself was born, that angered Hindu nationalists like Godse.
It’s a colourful, energetic play. An epic story of Greek tragedy proportions – crowds acting as the Chorus, punctuate the tale. The hubris of an urgent uprising. And the nemesis of political division and ideological schisms. Paul Bazley is charismatic as Gandhi. Laughing, joking, filling the stage.
It’s intensely theatrical. The vibrant colours of India are displayed – the costumes are tamarind, paprika, sunset yellow. The whole cast is superb cast.

Godse was a member of the Hindu Mahasabha political party, and for a while he was an ardent follower of Gandhi. He then began ridiculing the philosophy of non-violence. He believed Gandhi to have favoured the political demands of the minority Muslims during the partition of India.
In 2014, the Hindu Mahasabha party began attempts to rehabilitate Godse and portray him as a patriot. It requested Prime Minister Narendra Modi to install the bust of Godse. In May 2019, in the lead up to the final phase of Indian elections, a candidate from Bhopal, Pragya Thakur, called Godse a “patriot”. Facing intense backlash, she apologised later.
As Hindu nationalism becomes more widespread in India, statues and temples are being raised in Godse’s honour. The city of Meerut was proposed to be renamed after him but the possibility of such a name change was ruled out by the District Magistrate.