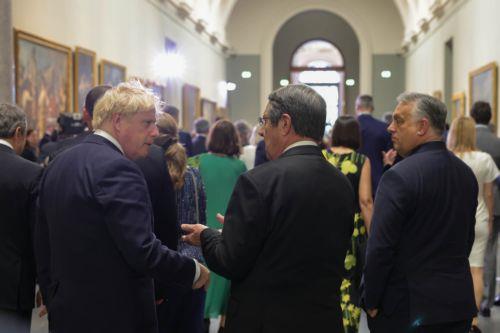 Anastasiades discusses stalemate in Cyprus problem with US President and British PM
Photograph: ΓΤΠ – Σ. Ιωαννίδης
The stalemate in efforts to solve the Cyprus problem was among the issues which Cyprus President, Nicos Anastasiades, discussed on Wednesday with the US President, Joe Biden, and the British Prime Minister, Boris Johnson, during brief encounters he had with them, in the margins of the Euro-Atlantic dinner that took place in Madrid.

Anastasiades said in posts on his Twitter account that it was his privilege to talk to President Biden in the margins of the Euro-Atlantic dinner and that they discussed the situation in Ukraine. “I underscored that all EU and NATO countries, respectively, should join the Russia sanctions, if the latter are to be effective,” he added.

Moreover, he noted that they exchanged views on the current stalemate over the Cyprus issue. I argued that with the US and other partners’ assistance, a functional and viable solution is indeed feasible, Anastasiades stressed.

He said that on a different note, he expressed his full support to President Biden’s recent statements on women’s right to choose. Women’s rights have to be safeguarded, Anastasiades noted.

Moreover, Anastasiades said he was glad to briefly meet with UK PM, Boris Johnson. He added that he expressed his disappointment with regard to the lack of progress in the efforts to resume negotiations on the Cyprus issue. He also said that they agreed to revert back to the matter at the earliest possible opportunity.