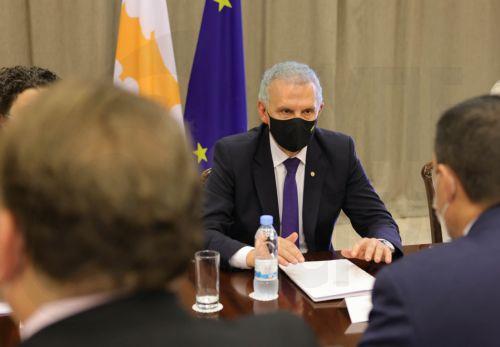 According to a press release issued by the Presidency, during the meeting, Photiou underlined once again his support and the support of the government to this very important function, which gives the opportunity to young people to strengthen cooperation and communication among all student communities and make the problems of Cyprus known.

The press release noted that this programme makes the Cyprus problem known, as well as the destruction of the island’s cultural heritage and the issue of missing persons.

Photiou also discussed with the delegation about expanding the programme and about a possible cooperation at the trilateral level with neighbouring countries, as for example among Cyprus, Greece and Egypt. This would give the potential to student communities of the three countries to know each country’s culture, language, history and traditions and would encourage their cooperation.

The delegation warmly thanked Photiou about his long-standing support to the programme “Cyprus, Greece, Diaspora: Educational Bridges”, noting that it looks forward to continuing their successful cooperation.

Cyprus has been divided since 1974 when Turkish troops invaded and occupied 37% of its territory.