President Anastasiades, Lillie welcome implementation from May 16 of regulation on non-military development in British Bases 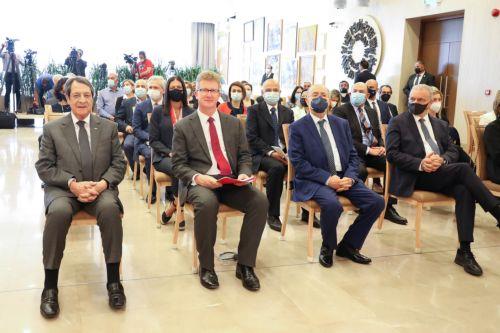 Cyprus’ President, Nicos Anastasiades and British High Commissioner, Stephen Lillie, on Monday expressed their satisfaction for the implementation from May 16 of an agreement between Nicosia and London for non-military development in the Sovereign Base Areas.

This means that people who own land in the communities that fall within the Bases areas will be able to develop their properties for residential, commercial or agricultural purposes.

In a Joint statement, the two Governments announced the start of implementation, on 16 May 2022, of the bilateral Arrangement reached in 2014 concerning the regulation of non-military development in the Bases.

“This is an important milestone in the long-standing relationship between the two states, epitomising the partnership, close collaboration and ties we have shared for more than six decades,” it adds.

It also said that this new planning system means the lifting of many restrictions on land and property development within the Bases.

This agreement, President Anastasiades said during a ceremony at the Presidential Palace to announce the launch of the scheme, was “the biggest town planning change” as regards the use and development of property in the Republic of Cyprus, as, 80% of the territory of the British Bases, an area of ​​about 200 square kilometers, out of a total of 255sq. m., changes status and is now included in planning zones. This, he added, will benefit four municipalities and 23 communities that fall either partially or in their entirety within the Bases.

This “historic” agreement, he said, pointing out that it was “the first substantial Development Scheme to be implemented in the Bases,” is expected to bring significant growth prospects, activities and multiple benefits, not only for the residents who live or have property in the Bases, but also economy and society at large, at a particularly difficult time due to the Russian invasion of Ukraine.

He said that 6,150 hectares can be used for residential, tourism, commercial, farming and agricultural development purposes, while the rest of the area is within protection or mild development zones.

The President admitted that the whole effort to complete the agreement from its signing on January 15, 2014 to-date “was time consuming”, but not without good reason, arguing that the complexity of the case should not be overlooked, and that many issues had to be overcome, not only due to the special status of the Bases and the environmental, military and security issues that arose, but because, it was the greatest town planning change as regards the use and development of property in the Republic of Cyprus.

He also referred to the “upgraded and excellent level of relations” between the Republic of Cyprus and the United Kingdom, which led to the signing and implementation of the Agreement.

In his own statements, Lillie, said he was “delighted” that, after much time and effort by officials on both sides, they were now able to announce that from 16 May, the implementation of the bilateral arrangement on the regulation of non-military development in the Sovereign Base Areas will begin.

“From that day landowners in the Bases will be able to submit planning applications and develop their land much like they can anywhere else in Cyprus,” he said.

He also said that this was “a memorable moment in bilateral relations,” and noted that the agreement signed between the two countries in 2014 was an important achievement of President Anastasiades’ first term. “I am delighted that it is now coming to fruition in your second term and during my final months as High Commissioner to Cyprus,” he added.

He also said it would not have been possible though, without the incredibly hard work of officials in the UK Government, the Sovereign Base Areas and the Republic of Cyprus. He also referred to the Administrator of the Bases and Commander British Forces in Cyprus, Major General Rob Thompson. “Without his determination we would not be making this announcement and it serves as a fitting tribute to his time in Cyprus, which is also coming to an end this summer,” he said.

Lillie said that this agreement was “the latest step forward in the close bilateral relations between our two countries, based on strong bonds of friendship and historical ties.”

The Joint statement said that planning zones and policies, similar to those in the Republic of Cyprus, will be applied in the Bases as of 16 May 2022, except in areas related to military and security requirements, and gave reassurances that “the rights of all land and property owners will continue to be safeguarded no matter where they reside, and environmentally sensitive areas will be protected.”

The new policies and accompanying maps will be published in their final form on 16 May 2022, and will be available for inspection by any member of the public.