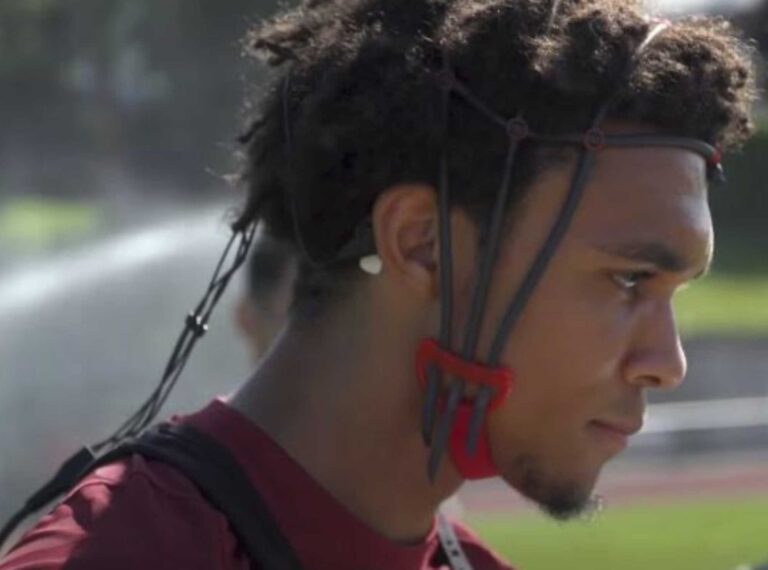 When Liverpool Football Club’s extensive pre-season preparations moved from Austria to the French town of Évian-les-Bains in the summer, they were joined by the German company neuro11, which helps professional athletes to develop their mental strength.
To make progress as a team, Liverpool wanted to finesse their work from “direct free kicks, wide free kicks, penalties and corners.” They call this “accuracy training.” The work of neuro11 adds a layer of efficiency: the aim is to ensure players are “in the zone.” This means running on automatic rather than having to think about what they are doing.
During pre-season the likes of Trent Alexander-Arnold, Mohamed Salah, James Milner and Harvey Elliott wore headsets with electrodes attached. This allowed neuro11 to ascertain whether a player is in the zone, and also how intensely.
The electrodes measure the live electrical activity of the brain. As part of neuro11’s funding by the EU and German government, they undertook neuroscientific studies to identify which part of the brain’s electrical activity is the most important to look at. They can identify whether a player is in the zone or not.
One individual might need to look at only one focus point, such as the ball or the target, very intensely. Another might have to switch the focus point between the ball and target frequently to help him get into the zone. While one individual might be very good at getting into the zone quickly, another might have a harder time to get in.
The importance is not to judge anything as good or bad, but to let every player get to know himself better. Knowing ourselves in more detail makes it possible for us to optimise our mental processes and develop the best, stable routine.
More evidence of how Liverpool constantly seek to tweak routines came in manager Jurgen Klopp’s admission that he has encouraged Liverpool’s Brazilian player Fabinho to go forward more in recent weeks – and the player responded with goals. Alexander-Arnold’s relaxed state ensured that he was able to find his team-mate while ignoring the obvious distractions around him, such as the barracking from Burnley fans and the howling wind and swirling rain. The partnership between Liverpool and science is proving beneficial. As well as free kicks and corners, Liverpool have worked with neuro11 to improve their penalty taking.
The willingness of Liverpool to embrace innovation has been highlighted by the recruitment of the throw-in coach Thomas Gronnemark, working with the club for a fourth season, and the use of the German surfer Sebastian Steudtner, who offered tips on staying calm under pressure.
Everyone in the team has played and watched sports all their lives. They knew the importance of the brain in relation to optimal performance and realised right away that they had developed something very special. How the brain learns using rewards and losses, and how it works in relation to risk, has been the topic of much research.
Liverpool put their players through penalty training in the build-up to February’s Carabao Cup final, with the German neuroscience team who have helped to improve their set-piece record. The team’s scored all 11 of their penalties. Chelsea missed their 11th, handing the Cup to Liverpool.
The Liverpool goalkeeper Caoimhin Kelleher successfully converted his penalty, to put the pressure on Chelsea’s goalkeeper Kepa Arrizabalaga, who had tried, unsuccessfully, to put off his opponents.
Liverpool have scored 15 goals from set pieces, excluding penalties, in the Premier League this season and boast the best set-piece goals record in the Champions League this term, with five.
James Neophytou