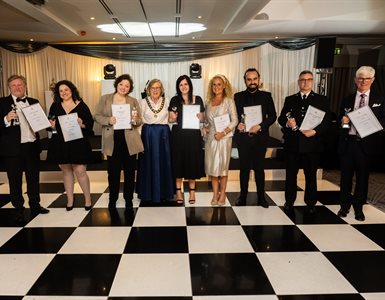 This year’s community champions have been recognised for their contributions at the Mayor of Hertsmere’s Civic Awards Ceremony 2021/22. .

The Mayor, Councillor Anne Swerling, presented eight Civic Awards to members of the public at a prestigious ceremony at the DoubleTree by Hilton Hotel on 24 April.  Each winner received a framed certificate and glass award in front of a distinguished audience of dignitaries, councillors and community members.

These awards aim to recognise the outstanding performance and dedication of individuals and groups living and working in the local community who voluntarily give their time to improve the lives and circumstances of Hertsmere residents.