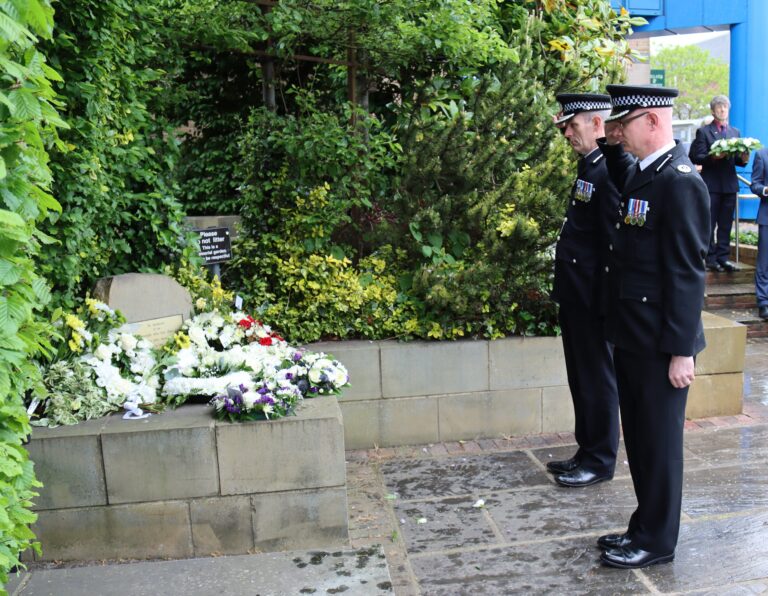 Seven people died when a high-speed London to Kings Lynn train derailed at a faulty set of points on May 10, 2002. They were six passengers traveling in the fourth carriage – Austen Kark, 75, Emma Knights, 29, Jonael Schickler, 25, Alexander Ogunwusi, 42, Chia Hsin Lin, 29 and Chia Chin Wu, 30 and passer-by Agnes Quinlivan, aged 80, who was killed by falling debris as she walked near the station. Around 70 more people suffered injuries.

Today, Chief Constable Charlie Hall and Hertsmere Chief Inspector Mark Bilsdon attended an Act of Remembrance at a memorial garden close to the railway station followed by a service at Our Lady & St Vincent Church in the town.

During the Act of Remembrance, a minute’s silence was held at 12.56pm – the time of the rail crash. They joined local dignitaries including the Deputy Lord Lieutenant of Hertfordshire, Colonel Kevin Fitzgerald, Hertfordshire County Council chairman Cllr Seamus Quilty and Hertmere’s Deputy Mayor, Cllr John Graham, as well as emergency service colleagues and railway representatives.

Wreaths were laid within the garden and candles were lit during a church service, which followed the ceremony, to remember the victims.

Chief Inspector Bilsdon said: “What happened here in Potters Bar 20 years ago devastated seven families and changed their lives forever. It also took a traumatic toll on those who were injured in the crash.

“The tragedy of that day was felt across the country and the people of Potters Bar continue to remember those whose lives were cut short.

“My thoughts today are with the family members and friends of the seven individuals who sadly died.”