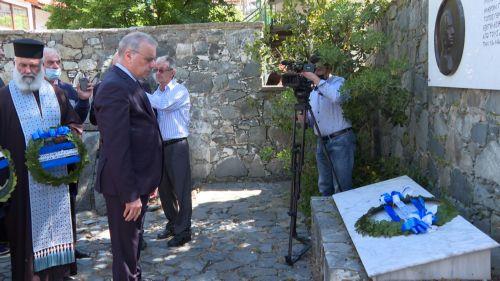 Cyprus’ main issue is the illegal invasion and continued occupation of the island’s northern third, said Interior Minister Nicos Nouris, pledging that President Nicos Anastasiades will continue to work for a fair and functionable reunification of the island, demanding the resumption of talks.

In a speech at the memorial service of the EOKA Liberation struggle heroes Michalakis Karaoli and Andreas Demetriou, at Palechori village, Nours said we pay tribute to those who sacrificed themselves for the freedom of Cyprus.

Noting the 1955-1959 liberation struggle was not the last struggle Cyprus faced, Nouris said 66 years after the heroes sacrifice, we continue to demand our lawful sovereign rights at the international fora.

Despite Turkey’s tactics, he said, “we repeat that Cyprus’ problem is one of illegal invasion and continued occupation and President Nicos Anastasiades will continue to work for a fair and functional reunification of our country, demanding the resumption of negotiations”.

He added that the occupation power, Turkey, is clearly pursuing a de facto division and annexation of half of our homeland, undermining efforts for a fair solution to the Cyprus problem.