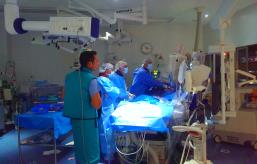 Story refiled with correction in the title, first and second paragraphs. The correct year is 2020 and not 2021, as President of the Midwives Committee of the Cyprus Nurses and Midwives Association, Stella Leontiou clarified to CNA, correcting her earlier statement.

Caesarean sections in 2020 in Cyprus reached 61% of all recorded births, President of the Midwives Committee of the Cyprus Nurses and Midwives Association, Stella Leontiou, has said.

In statements to CNA on Friday, Leontiou noted that while in Cyprus the percentage of C-sections among all births reached 61% in 2020, the accepted limit set by the World Health Organisation is 10% to 15%.

She pointed out that as a result of the increase in C-sections there is lack of midwives in Cyprus, since there are not enough natural births so that students of midwifery can complete their time-consuming obstetrics program.

Leontiou said that the number of midwives in Cyprus is not sufficient, adding that at the moment there are around 400 in the public and private sector.