AKEL and the Cyprus Presidential elections 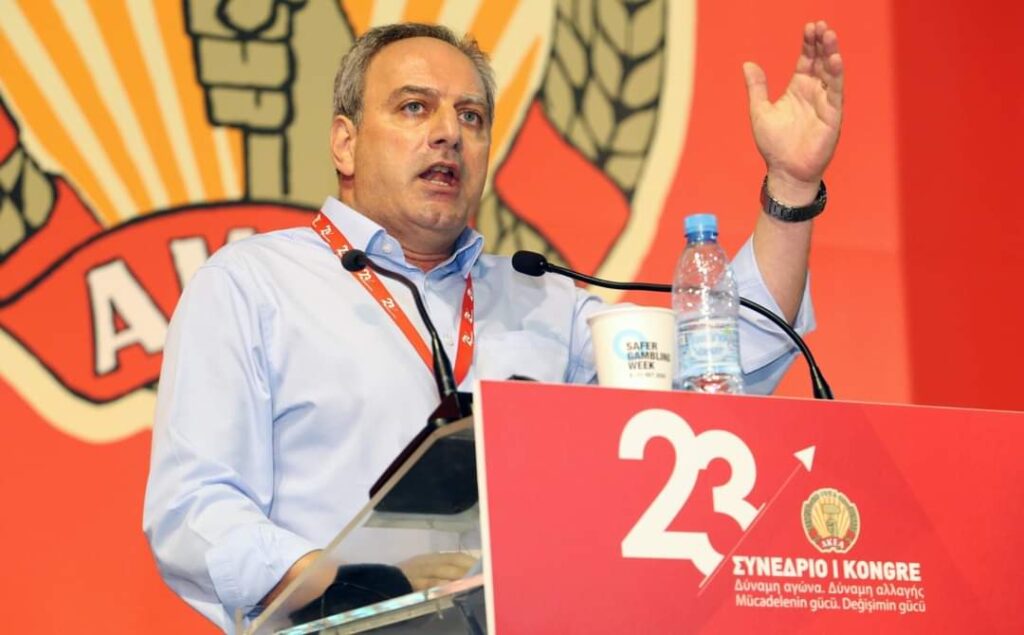 QUESTION: You decided to propose the candidacy of Mr. Mavroyiannis. The die has been cast. Is the decision final?

SS: No, it’s not final. It is a clear proposal-decision of the Central Committee to the Party Base organisations, to the Party membership as a whole and to the friends of the Left who – all of them – are participating in the processes we have as a Party. In period ahead we will discuss the proposal of the C.C. together with its whole rationale that gives us the possibility to win the Presidential Elections. When I say win, I do not mean AKEL. I mean that the Cypriot people win back their perspective and dignity, which is being trampled on every day by the DISY party government.

You have correctly said that the C.C. convened for two days and long in duration. In AKEL, democracy is a daily practice with 80-90 people taking the floor to speak. I don’t know of any other Party where this happens. All the speakers with a lot of responsibility and expressing their own views so that collectively we can achieve the best for our country.

The decision of the C.C is there to be discussed. It is based on a rationale. AKEL considers these elections as an opportunity to forge a broad political and social front to rid ourselves of the DISY party government and on the basis of a progressive programme with a positive political and social outlook, aiming to open up the prospects for the country again.

Andreas Mavroyiannis is both tried and tested, and also a well-known figure. He is first and foremost well-known among the political forces for his ability in handling issues to fulfill goals set and rally forces in order to achieve the best possible results. Through the various posts he has served as a diplomat for many, many years in the Republic of Cyprus, we believe he is an option that can bring together and rally broader forces.

QUESTION: However, Mr. Mavroyiannis was until recently under the current administration head of the negotiating team (on the Cyprus problem). What differentiates him from the government of Mr. Anastasiades so that you can convince people that if you want change, you bring change by the choice you propose?

SS: That’s a very logical and natural question. You have correctly said that Mr. Mavroyiannis is a negotiator. Until last August he was a diplomat in the Ministry of Foreign Affairs. So for most of his presence there essentially he was as a diplomat, entrusted by Mr. Anastasiades to help in the effort to solve the Cyprus problem. A. Mavroyiannis isn’t the one who takes the decisions, nor the one handling the Cyprus problem. It is the given President of the Republic that takes the decisions. That’s the first thing I’d like to say.

The second thing I’d like to say is that if Mr. Mavroyiannis is seen as sharing the views of Mr. Anastasiades and by extension of the ruling DISY party, then he also shares the views of AKEL and Demetris Christofias because he served the Christofias government too and even from the political post of Deputy Minister for the Cyprus Presidency of the Council of the EU. At that time the Republic of Cyprus had an excellent Presidency that made the whole of Cyprus proud. And it demonstrated that small Cyprus has great potential and this was acknowledged by all.

Mr. Mavroyiannis could have been considered as siding with other Presidents too because he served all the Presidents of the Republic as a diplomat. He served them and served Cyprus first and foremost with great success as everyone who from a crucial diplomatic post serves in various critical posts must do.

Mr. Mavroyiannis served from various crucial posts of negotiator, Deputy Minister, Permanent Representative of Cyprus in New York, Brussels and elsewhere, in important decision making centres. Furthermore, he is widely known in the international community and has extensive connections, which is very important because today Cyprus is being vilified and shamed on a daily basis because of the policy pursued by the DISY party government. And we need to restore our credibility in order to be convincing internationally.

QUESTION: Nevertheless, Mr. Mavroyiannis does not have some Party behind him to be able to secure the votes and pass to the second round of the presidential elections. For that reason, he will need wider votes from other parties. Will you leave the initiative to him? Will you start a new round of contacts again with the opposition parties you were talking to before, for example, the Democratic Party DIKO, which must be taken into account in terms of numbers to pass to the second round if we want a candidacy to be a winning option.

SS: First of all, elections and politics is not mere numbers, although numbers do play their role. As I said at the very beginning, the candidacy of Andreas Mavroyiannis gives this opportunity to those political forces who state that they want to put an end to this government that has been plaguing Cypriot society and the Republic of Cyprus for 10 years now.

So, yes, now there is an opportunity so that all the parties that share this view can come together around a common candidate. Of course, we will again address the political forces, as we did previously. And now with a very specific proposal that I would like to stress that they already know. Because from time to time Mr. Mavroyiannis, as a diplomat and in handling important issues, has spoken, talked and cooperated with all of these parties. So they know him and they know how competent and moderate he is, a person that seeks to ensure a synthesis of views. We shall therefore attempt to do that, in the direction of the political forces.

I must add that precisely because Mr. Mavroyiannis is widely respected, he will address, as we will address too, society, and at the same time I must say that many personalities and people from different walks of life, because they know his work, I am sure that they will support him. They will support this candidacy in the effort we are making to change things in our country and to open up perspectives.

However, it is too early for that. We are in the day after the debate and decision of the Central Committee. We will focus on our internal party work to finalise the decision according to the Party’s procedures and of course we will also address the political forces and society more broadly as I have said.

QUESTION: Mr. Mavroyiannis has not yet announced his candidacy. Do you know whether he intends to do so? Did he wait for AKEL to take a stand and then do so?

SS: Mr. Mavroyiannis had made some public statements that yes, he would stand as a candidate if and when there is a serious political force that would support him. Logically, he was thinking that to run as a candidate without securing the support of some major parties or parties and organised groups behind you, you then realise that the chances of winning the election are also greatly reduced.

Beyond that, I note that Mr. Mavroyiannis does not have some party agenda. He is independent, non-partisan. He has positions because the point is not just to find a personality who will win you the election, but also to have a personality with whom you share the same or similar or convergent positions and thoughts on the key issues that determine the course of the country and people.

This is the case with Mr. Mavroyiannis, with regards the Cyprus problem, as well as with the issues relating to the rule of law and the welfare state, corruption and entanglement/interwoven interests that they will need to be addressed.

I must say that throughout Mr. Mavroyiannis’ career in public affairs and in very important posts, no one has anything negative to say about his own political, professional life. He is an honest and clean politician, free of dependencies and entanglements, who can ensure the titanic effort we are making to confront corruption and interwoven interests.

QUESTION: The final decision, as you have said, will be taken by the Congress on June 5. If there is a reversal (of the recommendation), because it is well known that there are democratic procedures in the Party which allow for a reversal of any decision, what will the subsequent steps be?

SS: AKEL’s democracy is indeed substantive, not in words. But I am convinced that with the rationale surrounding the candidacy of Andreas Mavroyiannis, with the whole content of the decision and the Central Committee’s substantiation which emerged after the two-day meeting of the Central Committee that the Party as a whole will support this proposal. And from June 5 onwards, when we will the final decision will be taken at the Pancyprian Congress, we will devote all our energy and efforts to achieve progressive change.

QUESTION: Let me tell you that I have tried with the questions I have asked to pass on some of the many messages from our listeners…

SS: I’m sure people want to ask a lot of questions. In the coming days we will be able to say a lot more things, today is the first day. You realize that many things can happen.

I repeat that Party members will have the opportunity, convenience and possibility to hear the content of the Central Committee’s decision, to express their views. You know that in the Party base organisations there is at this stage also the advisory vote and we will go to a Congress as provided for in the Party statutes where we will take our decision by secret ballot.

For that reason, the party membership have the floor. And because we are convinced that the Party leadership is putting forth a very well-documented and substantiated decision and proposal which offers us a perspective to win these elections and to have a President and a government with a progressive agenda, that we will embrace this effort. As always with one voice and one fist, all of us together will wage this difficult battle, in difficult conditions to be able to change things in our country.

Our country deserves something much better than what we have today.