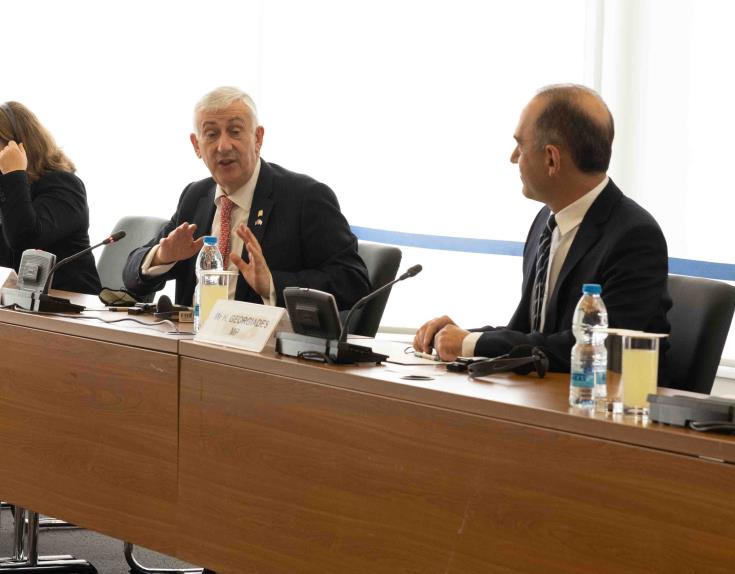 The United Kingdom fully supports Cyprus, the Speaker of the House of Commons Sir Lindsay Hoyle told the Foreign and European Affairs Committee of the House of Representatives on Tuesday.

The British official has been in Cyprus since Monday evening for a three-day visit, during which he has been received by President of the Republic, Nicos Anastasiades and House of Representatives President Annita Demetriou.

In his opening remarks, Sir Lindsay Hoyle noted that this is the first official visit of a Speaker of the House of Commons to Cyprus, and his first visit to a foreign country since taking office, which, in his view, confirms the strong Cyprus-UK friendship and mutual commitment to democratic values.

Later on he reiterrated the UK`s support for Cyprus “regardless of the government in office”, inviting the Cypriot side to come forward with “new proposals” on British support for the resolution of the Cyprus problem.

On the issue of increased tuition fees in UK universities, the Speaker of the House of Commons said that the issue of education was very important to him and assured the Committee members that he would meet with the UK State Secretary for Education on the issue on his return to the country.

Referring to the British Bases, he said that their role is important for peacekeeping, NATO and the UN, and pointed out the economic benefits of the related investments in the region.

Finally, given international geopolitical challenges, such as Russia`s increasing aggression, Sir Lindsay Hoyle expressed the hope that peace would prevail, while stressing that any escalatory action cannot go unanswered.

In a brief intervention, the Chairman of the Committee and DISY Deputy President Harris Georgiades highlighted the role of the United Kingdom in the Eastern Mediterranean, adding that the problem of the Turkish occupation is not a problem of the past but examples of an open problem are recorded every day. “We need the constructive intervention of the United Kingdom, we are not asking for a break in relations with Turkey but for the right demarcation for a positive change in Turkish policy,” he added.

From the side of the Committee members, DISY parliamentary representative Nicos Tornaritis made special reference to the role of the United Kingdom as a guarantor power of the Republic of Cyprus, calling on the British government to do “everything in its power to persuade Turkey to comply with international law, the UN Charter and the decisions on the Cyprus problem and the basis for a solution, the Bi-zonal, Bi-communal Federation”. In addition, he also addressed the issue of the tuition fees increase for European students following the UK`s withdrawal from the European Union, asking for proposals from the British side to ease the tuition fees situation for Cypriot students who continue to choose the UK for their studies.

Speaking on behalf of AKEL, the party`s parliamentary representative, George Loucaides stressed the need to protect democracy, the rule of law, human rights and to decisively address new and old threats to democratic institutions.

Referring to the role of the UK as a guarantor power, Loucaides called for support “to continue the talks as soon as possible and not to open new issues”, adding that the Turkish Cypriot side and Turkey must realise that there can be no two-state solution, while he also called for an end to the settlements in Famagusta and Turkey`s provocative behaviour in the Cypriot EEZ, which “undermine efforts to resume negotiations and find a comprehensive solution to the Cyprus problem”.

Nicosia MP and DIKO Deputy President Christiana Erotokritou said that the long-standing relations between Cyprus and the United Kingdom are overshadowed by the Cyprus problem. “The United Kingdom has always supported the right solution to the Cyprus problem”, she added, stressing in particular that the issue of political equality “is not open to any other interpretation than that set out in the United Nations Charter and International Law and cannot be the product of political alchemy.”

In her capacity as Chair of the House’s Finance Committee Erotokritou expressed the view that the UK`s withdrawal from the EU has highlighted the role of countries such as Cyprus in strengthening cooperation between the two sides.

MP and President of far-right ELAM party Christos Christou submitted questions on possible considerations for the abolition of the British Bases in Cyprus on the basis of relevant 2018 court decisions and UN resolutions, as well as on the appeal of 34 EOKA fighters to the English justice system and the claim for compensation for torture, which is still pending. Finally, Christou called on the British government as a guarantor power to put pressure on Turkey “to change its orientation towards a just and viable solution to the Cyprus problem”, and suggested a visit by Sir Lindsay Hoyle to the “imprisoned graves” in Nicosia as a “message of friendship”.

EDEK MP Kostis Efstathiou highlighted the special bond, but also the special responsibility of the UK towards Cyprus, which he would like to be more specific. Stating that “occupation, refugees and ethnic cleansing cannot be accepted by a democratic society”, Efstathiou stressed that the British government must stand on matters of principle and play a decisive role in the Cyprus problem.

From the Ecologists’ Movement, MP Alexandra Attalidou highlighted the need to protect the lives and dignity of women politicians and called on the British government to protect the voice of Turkish Cypriots persecuted by Turkey. Attalidou also addressed the issue of the loss of the right to participate in local elections for Cypriot and British citizens living in the UK and Cyprus respectively after Brexit, calling for a solution to be found within the Commonwealth framework.