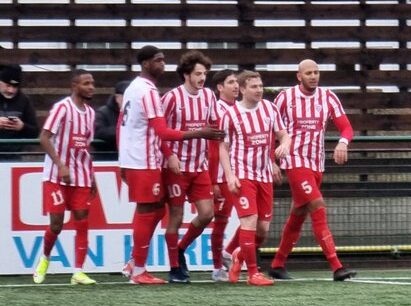 New Salamis had a good week winning two games on the trot to put them in a good position second in the Spartan South Midlands League premier five points behind the leaders Risborough.

They beat Flackwell Heath 3-2 on Saturday the first goal came from Charlie Georgiou as early as the 9th minute in the 30th minute Flackwell equalised through a well worked corner going into the break 1-1.

In their second game on Tuesday night against Broadfields United New Salamis fell behind  again to 1-0 down after 18 minutes but within a minute New Salamis equalised through Elijah.Five minutes later the Reds took the lead through Charlie Georgiou .8th minute Broadfields equalised 2-2. And Just before the break Johan made it 3-2 to Salamina with a sleek penalty. Two goals in the second half from Derek Asamoah and George Lutayaa gave New Salamis a good 5-2 win.