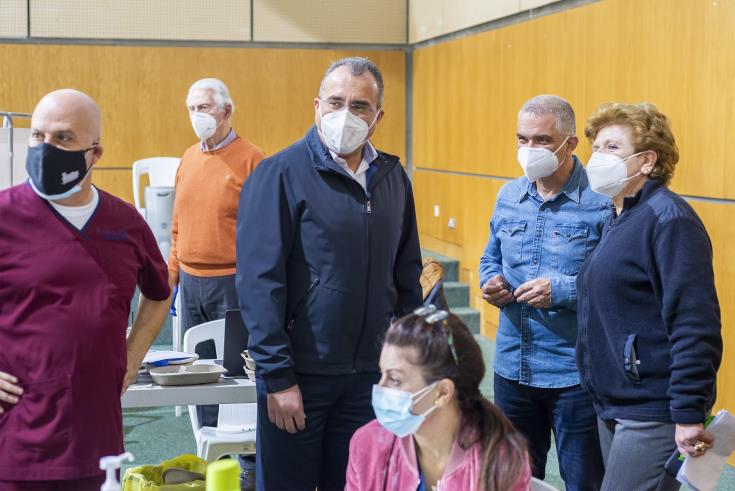 Minister of  Health Michael Hadjipantela said on Saturday that Deltacron, a new variant of COVID-19 found in Cyprus, was not something to worry about.

The Minister, who was accompanied by the Permanent Secretary of the Ministry, Christina Yiannaki, visited the vaccination center at “Spyros Kyprianou” sports center, in Limassol, where children were vaccinated against COVID-19.

In his statements, Hadjipandela thanked the Cyprus Pediatric Society for the voluntary participation of its members in the effort to vaccinate children aged 5 to 11 years, as well as nurses and health visitors.

“I wanted to see with my own eyes that some problems we had with the walk-in centers in the previous days, do not exist today and as you have seen, there was no problem,” he said.

He assured that the effort to vaccinate children will continue and reminded that next Saturday there will be a vaccination center in Trimiklini, pointing out that “we are constantly thinking to expand this program.”

Commenting on the long queues in walk-in vaccination centers, the Minister noted that while many people have expressed interest in being vaccinated, there’s a decrease in staff, due to the increased cases of coronavirus in health professionals.

Asked whether he was worried about the increase in hospitalizations, given that the schools will open on Monday, the Minister said that they were following the issue and that if more measures were needed they will decide in cooperation with the experts.

As to whether there is any thought of reducing quarantine to five days for COVID for the general population, Hadjipandela said that this will be discussed on Tuesday, in his meeting with the scientific team and if they observe that the results are good for the medical staff, they will probably look at it for the whole population.

Regarding the new Deltacron variant, which was identified in patients by the team led by the professor of the Department of Biological Sciences of the University of Cyprus, Leontios Kostrikis, the Minister said that the Ministry was aware and that it was not something to worry about at the moment, since it was a combination of two mutations that already existed in Cyprus. He added that more on these would be said in a press conference next week and said that he was proud for the findings of Cypriot scientists.

Permanent Secretary of the Ministry of Health, Christina Yiannaki, said that about 420 children were vaccinated on Saturday at “Spyros Kyprianou”, while the walk-in accommodated 800 citizens.

President of the Cyprus Pediatric Society Dr. Michalis Anastasiades expressed content for the large number of children receiving the jab at the vaccination center at “Spyros Kyprianou”.

He assured that the Cyprus Pediatric Society has put itself and its members at the disposal of the state for the vaccination of children.