Bus passengers in Nicosia and Larnaka to travel with 5G speed 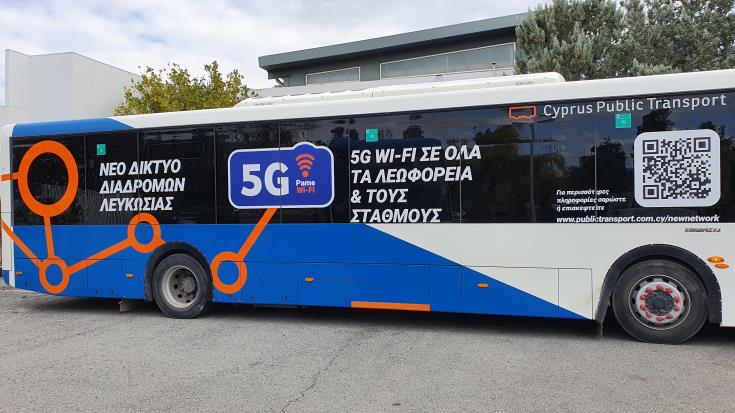 Connection to a Wi-Fi network, with 5G speed, will be possible for passengers of Cyprus Public Transport buses. The connectivity option is provided to the company’s fleet of 300 buses, in Nicosia and Larnaka, as well as to the bus stations. Also, a new route network, providing more options to passengers will be implemented on January 29th.

He added that the new route network will include early morning and night bus routes. At the same time, there will be an increase to the frequency, an expansion of hours and better coordination at transfer points. This will result in less waiting time, as well as fastest routes.

The Minister added that the Sustainable Urban Mobility Plan is under preparation, with the first deliverable result being the study for a complete bus-lane network, for which there is already an approved budget of €4 million. He said that this will bring major changes to transportation.

This is the beginning of a new age of connectivity, said CPT’s CEO Julio Tironi, presenting the new network. The company will be the first in Cyprus and EU to implement bus connectivity to 5G speed. This will result to stress-free transportation, with high-speed connectivity, he added.

“Our goal is for the bus to become a viable alternative to private vehicles,” he noted. This will be possible through the above, as well as the new route network in Nicosia. This will interconnect the whole city, using multiple hubs, decentralising the Solomou Square hub, which is now the main one.

CYTA’s CEO, Andreas Neocleous mentioned that this project would not have been possible, if CYTA hadn’t already made a great investment in the fastest mobile network in Europe, as it has been certified in 2021. Today, there is a 98% population coverage for 5G, and the plan is to reach 100% by March 2022, he said. This coverage percentage is also a first in Europe, he added.

“We are very happy that our actions speed louder than words”, he said, adding that 5G network is not only a fast internet network, but it will make possible automation development, as well as applications using it to provide better quality of life.

“Transportation will become safer, more efficient and sustainable, so that it is in the service of citizens,” he pointed out.