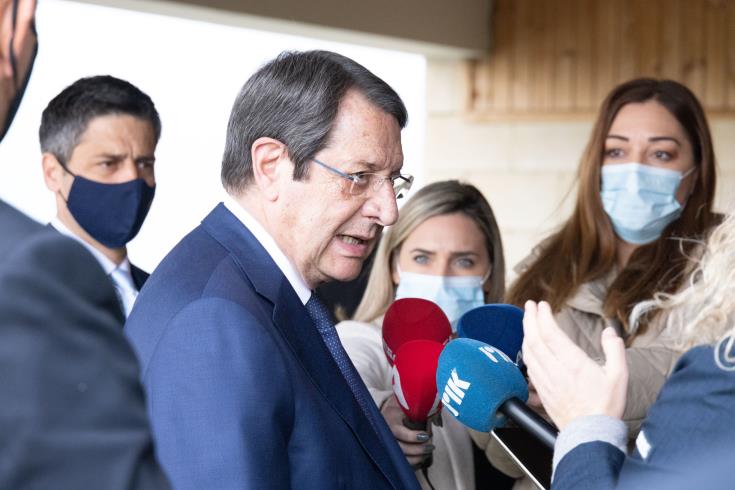 Turkey has never discussed or accepted the abolition of the 1960 Treaty of Guarantee, President of the Republic Nicos Anastasiades said Saturday, commenting on a series of leaked documents concerning the 2017 UN-brokered negotiations over a Cyprus settlement in Crans Montana, Switzerland that ended in a deadlock.

“This is evident in the minutes of the meeting with the UN Secretary-General,” he said speaking to the press in Limassol.

Responding to a question whether he feels vindicated in the wake of the minutes published by “Phileleftheros” daily, Anastasiades said that what is important is the vindication of the Cypriot people.

He accused Turkey of following a predetermined course aiming at the partition of Cyprus since 1956, followed by the illegal unilateral declaration of independence of the area under Turkish occupation in 1983, while adding that Ankara continues to pursue this aim.

“Therefore, they should not attribute blame to any President of the Republic of Cyprus or the Greek Cypriot side,” he said, adding that “let us see who bares the responsibility by analysing the course of history.”

Replying to a question whether the current climate in the Cyprus problem can be reversed, the President said that our efforts move to that direction.

Responding to a question whether Turkey was discussing the abolition of the Turkish guarantees, the President said Turkey “has never accepted or discussed such a thing,” adding this was evident in the minutes during the meeting with the UN chief.

“This was stated by (Turkish Foreign Minister Mevlut) Cavusoglu both before and after the meeting in Crans Montana, when he was saying we should wake up from the dream that guarantees would be abolished, these were the written positions and the positions of the Turkish side outlined during the meeting with the UNSG,” the President concluded.

Cyprus has been divided since 1974 when Turkish troops invaded and occupied the island`s northern third. Numerous rounds of UN-brokered talks to reunite the island under a federal roof failed to yield results