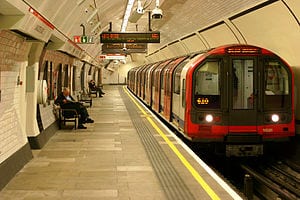 RMT urged to call off its strike action, which would affect five Tube lines all day Friday (26 November), as TfL requests further talks
“While every other union has agreed to these changes and our staff have been enjoying the benefits of the changes since August, we’re willing to work with the RMT and review the changes after Night Tube services have returned”
Nick Dent
Director of London Underground Customer Operations

Tube customers have been advised that the RMT’s planned strike action will cause severe disruption on five Tube lines (Central, Jubilee, Northern, Piccadilly and Victoria) all day tomorrow (Friday 26 November) if it goes ahead.

TfL will do all it can to provide as many transport options as possible, but Londoners are advised to check before they travel and leave more time for journeys.

London’s high-frequency bus services will continue to run throughout the planned strike action although are expected to be busier than normal, as will London Overground, DLR, TfL Rail and London Trams.

TfL announced recently that night services on London Overground will be restored on Friday and Saturday nights between Highbury & Islington and New Cross Gate from 17 December 2021.

Tomorrow’s planned strike action is the first of two days and eight nights scheduled between now and Christmas, which will cause disruption to Londoners and the city’s recovery.

The RMT has taken this action over new rosters, which have been agreed by the other recognised union and were introduced for Tube drivers in August.

This strike action has been called despite the new rosters including assurances that there will be no job cuts, providing certainty and the option of permanent work for those on part-time contracts and only requiring four night shift weekends per year.

London Underground has repeatedly met with the RMT through conciliation service ACAS to work with the union to address their issue over the last few months and previous strike action was suspended while these constructive discussions continued.

Despite the many meetings, the RMT hasn’t presented any workable alternatives to the roster changes and refused a recent offer to jointly review the Night Tube after a trial period. TfL asked the RMT to join it for further talks today (Thursday 25 November) to resolve their issue without disruptive strike action.

If the RMT goes ahead with its unnecessary action, it would severely disrupt services on the Central, Jubilee, Northern, Piccadilly and Victoria lines on Friday 26 November from 04:30. It could mean a significantly reduced service on these lines and the Waterloo & City line all day with little or no service in places.

It is also likely to mean much busier services on the Tube lines that are not affected by the strike (Bakerloo, Circle, District, Hammersmith & City and Metropolitan) as customers seek alternative routes. Thameslink services and buses through central London are also expected to be busier than normal.

Customers who need to travel using TfL services are advised to check before they travel, allow more time for their journey and travel at quieter times where possible.

Customers in central London are advised to walk, cycle or use a rental e-scooter for all or part of their journeys where possible if the planned action goes ahead.

Those arriving into London via National Rail stations are encouraged to complete journeys on foot or by using Santander Cycles as buses from London termini will be busier than normal. Services on the morning of Saturday 27 November may also be disrupted, so TfL is advising customers to check before they travel.

The RMT has also called for strikes to disrupt the re-introduction of Night Tube services on the Central and Victoria lines from the evening of Saturday 27 November and on weekends throughout December.

TfL is warning customers that both lines are expected to be severely disrupted from 19:00 onwards, with little or no service from this time overnight on 27-28 November, 3-5 December, 10-12 December and 17-18 December. Customers are advised to check before they travel and use buses to complete their journeys where required.

TfL previously announced that the Night Tube will be returning in time for the busy Christmas period after being suspended since March 2020 due to the pandemic, providing more options for customers who need to travel at night either for leisure or for work, while also making journey times shorter and offering additional safe routes home.

The return of Night Tube on the evening of Saturday 27 November is highly likely to be disrupted due to this planned action. Plain clothes and uniformed British Transport officers will be on hand to ensure staff and customer safety.

Further information will be available ahead of, and during, the strikes at tfl.gov.uk/tube-strike as well as on the TfL Go app, TfL website and Journey Planner.

Nick Dent, Director of London Underground Customer Operations, said: ‘The RMT’s planned strike action is needless and it will threaten London’s recovery from the pandemic, despite no job losses and more flexibility and job certainty for drivers.

‘While every other union has agreed to these changes and our staff have been enjoying the benefits of the changes since August, we’re willing to work with the RMT and review the changes after Night Tube services have returned.

‘This review can only be successful if the RMT agrees to meet us for talks and withdraws its proposed action so we can all see how these changes will work in practice.

‘If the RMT refuses to engage with us and carries out its unnecessary action, which is timed to cause maximum disruption for our customers looking to enjoy London during the festive season, Londoners are advised to check before they travel on days of planned strike action.’