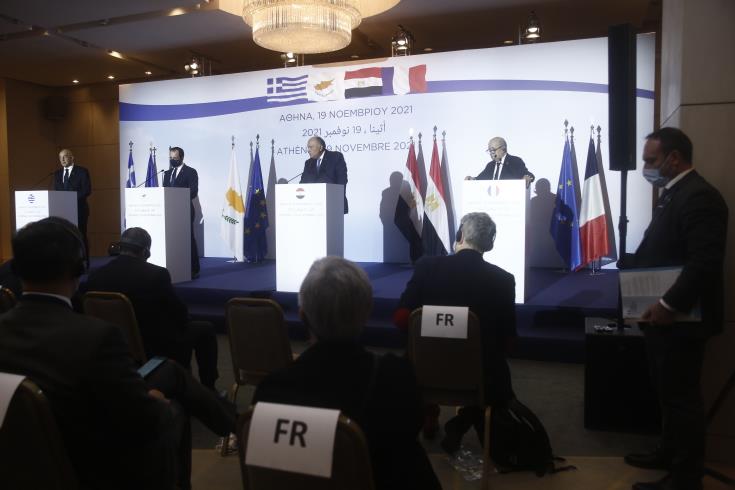 Christodoulides during his joint statements with his counterparts, in Athens,

The four countries face “common challenges, but also a common vision”, which concerns “the creation of conditions for peace, security, and cooperation in the region”, Christodoulides said in joint statements with his counterparts, highlighting the strategic orientation of the cooperation.

He also stressed the importance of the four countries’ active participation in the energy plans, which are under development in the Eastern Mediterranean, as well as their willingness to participate in the effort to shape an “alternative energy corridor for Europe”.

During the quadrilateral meeting, the Cypriot Foreign Minister briefed his counterparts on Turkey`s illegal actions both in the fenced-off city of Famagusta and in the Cypriot EEZ. Christodoulides said that these illegal actions form part of Turkey`s “revisionist policy in the region”.

Christodoulides also informed his counterparts about developments in the Cyprus problem, stressing the need for “the international community to send the right messages for the resumption of negotiations on the basis of the agreed framework”.

At the same time, he reiterated that the quadrilateral cooperation between Greece, Cyprus, Egypt, and France “does not have the character of a zero-sum game, nor does it aim to exclude any country”.

During his statements, the Cypriot Foreign Minister made a special reference to the migration issue –which was one of the topics discussed during the quadrilateral meeting– noting that Cyprus is once again the EU member state with the highest number of asylum applications in proportion to its population, with the asylum seekers reaching 4% of the population.

On this issue, Christodoulides said that Egypt maintains a “very responsible stance” in managing the great pressure on its borders, “unlike other countries that choose to instrumentalize human suffering”.

Finally, Christodoulides noted that during the quadrilateral meeting, the developments in the Middle East, Syria, Lebanon and the Sahel were also discussed, as well as the results of the Paris Conference on Libya, for the organization of which he congratulated France.

On his part, Greek Foreign Minister Nikos Dendias highlighted the common principles and values that shape the cooperation between Greece, Cyprus, Egypt, and France.

He underlined that this strategic quadrilateral cooperation is based on common principles, such as “respect for international law, the law of the sea, the peaceful settlement of disputes, the prohibition of the use or threat of use of force, as set out in the UN Charter and the respect for the sovereignty and sovereign rights of all states”.

Referring to Turkey’s stance he said that it “continues to threaten Greece with war and to violate our sovereignty and sovereign rights. To illegally occupy a territory of the Republic of Cyprus and violate the rights in its maritime zones. To harbor the Muslim Brotherhood. To instrumentalize immigration […]”.

He noted, however, that “today`s meeting is not an anti-Turkish meeting”, adding that Greece and all the countries of the region want good neighboring relations with Turkey.

As he said, Turkey is welcomed to participate in these multilateral cooperation schemes on a fundamental precondition; its adherence to the principles of international law, including the UN Charter and the UN Convention on the Law of the Sea.

“We reaffirmed the convergence of views between us on a number of regional and international issues,” Shoukry said, stressing that among them, “the full exploitation of our energy resources” is a common goal.

Shoukry also stressed that the goal of multilateral cooperation is to deepen relations between the four countries and promote prosperity and progress for their people.

French Foreign Minister Jean-Yves Le Drian described the “3+1” format as a “scheme of trust”, underlining the convergence of the four countries` views on a number of complex and difficult issues.

He noted that the quadrilateral cooperation enables the four countries to act together and take initiatives in order to address common challenges and make good use of the huge potential of the Eastern Mediterranean.