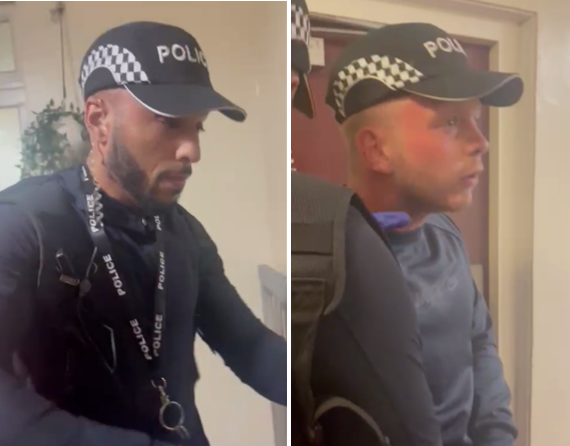 We are aware of a video circulating on social media filmed in east London appearing to show two men impersonating police officers.
Police were called at 18:51hrs on Tuesday, 12 October to a residential block in The Shaftesburys, Barking IG11.
A woman reported that two men had attended her address. They were claiming to be police officers and were dressed in crude uniform including caps, harnesses and ‘asps’ (batons) and said they were there to search the property.
They were initially allowed in before the residents became suspicious and asked to see their identification, which they could not produce.
Upon being further challenged the suspects left the address. They were followed and fled in the direction of Abbey Road.
Officers attended and conducted an area search but the males could not be located.
It is not believed that anything was stolen from the address and there were no reports of any physical injuries.
An investigation is ongoing. There have been no arrests at this time.
Police would like to speak to the two men pictured and ask anyone who has information that could help to call 101 ref CAD 6640/12 Oct.
Information can be given anonymously to Crimestoppers on 0800 555 111.
Guidance on checking the identity of a police officer
Unfortunately, there have been occasions when fraudsters have posed as police officers, both in person and on the phone, to trick people into giving them personal information and defraud them of money.
If one of our officers contacts you in person, they’ll show you their police warrant card. This is proof of their identity and authority.
Remember if you’re unsure about whether the person you’re dealing with is a genuine police officer – stop – and call us on 101 to check their identity.
In an emergency always call 999.
For more information, please visit our website