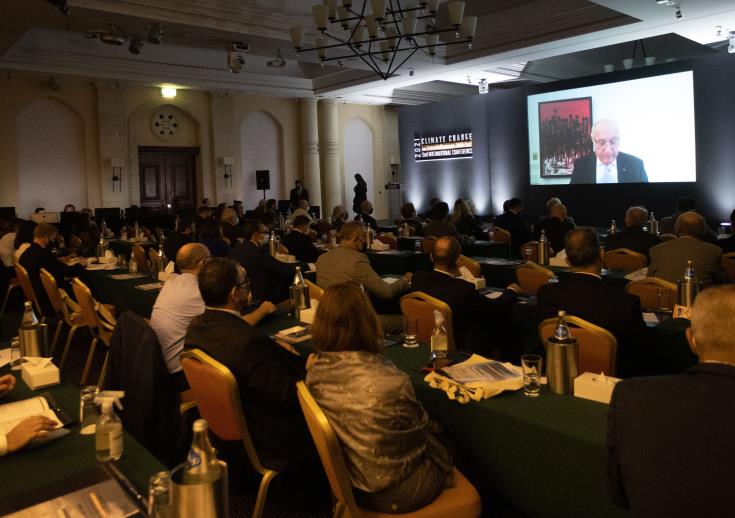 Regional and international cooperation is the key to mitigate the impacts of climate crisis, keynote speakers underlined during their opening speeches at the 2nd international conference on climate change in the Eastern Mediterranean and the Middle East taking place Wednesday and Thursday in the coastal city of Pafos, Cyprus.

Professor Costas Papanicolas, President of the Cyprus Institute which co-organises the conference and advisor to the President of Cyprus on climate change, noted that the climate crisis is the greatest challenge humanity is faced with and the time to act is long overdue.

He said that in a few weeks in Glasgow, during COP26, the global situation will be assessed and an agreement will be reached for the coming years. He noted that our region is a hotspot and the climate impacts will be manifested in an immense manner, affecting half billion residents.

Professor Papanicolas noted that this is the reason the Cyprus initiative wanted to involve the countries of the region to come up with solutions and ways to combat the crisis.

He added that over the last 24 months 240 scientists and experts have produced reports on the state of the climate change and recommendations are made to address the problem effectively. He said that we now have a solution toolbox that can be used to mitigate the crisis and assist us to adapt to its impacts. He said that this conference is a milestone and the next one is the ministerial meeting for the formation of the action plan and a year from now hopefully will have a summit led by the Cyprus government and ‘’get down to business’’.

He concluded by saying that climate crisis is a battle we need to win quickly and that we can still prevent the crisis from becoming a catastrophe.

Virginijus Sinkevičius, EU Commissioner for Environment, Oceans and Fisheries in a video address of the conference said that the effects of the climate crisis in Cyprus and the region are real. He spoke of the many challenges the populations are faced with and the EU itself as it needs to come up with actions plans, strategies and policies to mitigate the problem.

He said that the hotspot of the Easter Med and the Mideast is particularly vulnerable and unless we act now, the impacts will be catastrophic. He said that “it is late, but not too late” to act.

The Commissioner said that we need to have policies for the water, the seas and the oceans, the pollution, the emissions and the agriculture, the marine environment, the ecosystems etc and the EU is dramatically stepping up its efforts to this end. He said that efforts are addressed to the international community as well in order to all adapt our policies for the common good.

Commissioner Sinkevičius said that coastal areas which are dependent on tourism also face issues because of the population density and the food provision as well. He noted that we need action in all levels and a systematic approach.
He also praised Cyprus’ expertise, excellent relations with neighbours and the scientific knowledge noting that today’s conference and Cyprus’ initiative is an excellent example of cooperation.

Prince el Talal of Jordan in his speech said that this meeting is extremely important for our region, and spoke of the socio-economic effects, the high unemployment, the water scarcity etc.

He said that Jordan is the most water stressed country in the region and added that it is time to talk about the Mediterranean as a region and a whole and not the sea of deaths because of the migrants’ tragedies. Prince el Talal said that drought seasons in the region, low precipitation, fleeing of populations, water scarcity and water shortage issues are of utmost importance for the region.

He said that we need consistent policy on shared waters and partnerships to effectively face the many challenges and the consequences on our populations.

Laurent Fabius, former Prime Minister of France and President of the French Constitutional Council, in his virtual address said that the Conference is important because of the unprecedented challenges in the region adding that in a few weeks during the COP26 in Glasgow, countries will have the opportunity to discuss the way forward.

He noted that in Glasgow all countries must submit their action plans, adding that some players have not done so. He also said that financing the developing countries is a good action plan but we need to do more and deliver the financial assistance needed for the ecological transition of these countries.

Fabius also said that this summer we have experienced extreme heat, flooding and catastrophic fires and at the same time the water stress and the sea level rise have tragic consequences.

These tragic events, he continued, are a present reality and these catastrophes are linked with human activities. He spoke of the recent UN report on climate change and its findings on the region of the Mediterranean with temperature increase 10% higher than global average and warming twice as the global average. Fabius said that the effects of the climate crisis are present in all aspects of our lives, on economy, people’s health, stability, migration and could be the root of future conflicts.

He also said that education and adaptation are also important adding that the youth could be mobilised and they could mobilise their parents and grandparents as well. He concluded by saying that cooperation between scientists and politicians and social society is important.

Day 1 of the conference continues with panels on topics such as energy and renewable sources, emissions, climate resilience, agriculture and food chain etc.