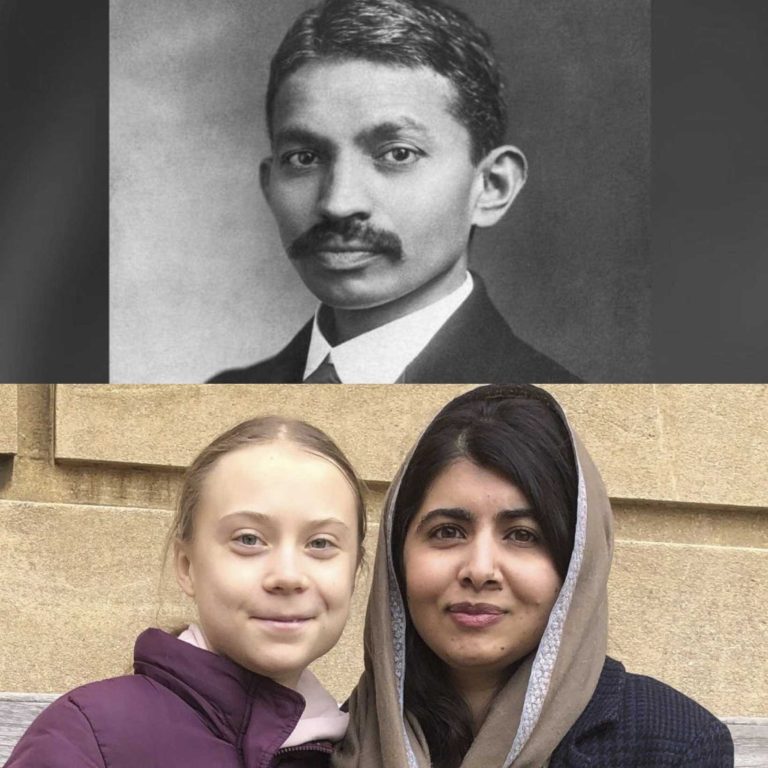 Mohandas K. Gandhi died in 1948, aged 78. His autobiography “The Story of my Experiments with Truth”, tried to combine his own tradition – rural, religious – with the leading, progressive ideals of the West, inspired by Tolstoy, Christ, Thomas More, William Blake, William Morris. An attractive ‘Eats meets West’ fusion, fuelled by the power of non-violence (Ahimsa) with social action that Gandhi called “soul-force” (Satyagraha). His seminal experiences, after law school, were the injustices of apartheid South Africa before he took on the cause of Indian independence.
In 2021, it seems that Gandhi is nowadays a forlorn, unfashionable and distant figure. Revisionists and woke warriors have side-lined him, claiming he was a malignant force. The charge is that he was crypto-colonialist, conservative, egotistical, anti-modernist, and that he set back the cause of Indian independence, rather than accelerate it. That he cosied up to the billionaire industrialists. I’m surprised nobody has torn down his statue in Parliament Square.
I am certain that, when the toxic tribalism of our odious confrontational times has subsided, history will be very kind to Gandhi. It will place him among the twentieth century’s most epoch defining individuals – Einstein, Churchill, Gorbachev, Reagan, Thatcher, Mandela.
George Orwell’s 1938 essay Reflections on Gandhi stated that despite the “unappealing factors of homespun cloth and vegetarianism … compared with other political figures, how clean a smell he has managed to leave behind.”
Orwell writes humorously about the Left. He says it “draws towards it with magnetic force every fruit-juice drinker, nudist, sandal-wearer, sex-maniac, nature-cure quack and pacifist in England.” Whilst he finds all this distasteful, he says that “in judging a man like Gandhi one seems instinctively to apply high standards. His natural courage was quite outstanding.”
India’s path after independence – a Soviet inspired one, led by Prime Minister Jawaharlal Nehru – was a deviation. It took India decades to find its technological calling.

Norman Finkelstein is an American academic who gained notoriety with his book The Holocaust Industry. The son of Holocaust victims, he fought for Palestinian rights and lived with Arab families in the Israeli occupied territories. He had a semi-famous confrontation with lawyer Alan Dershowitz when he accused Dershowitz of plagiarism. Dershowitz used his considerable influence to deny Finkelstein a professorship. (All you need to know about Dershowitz is that he was legal advisor to O.J. Simpson, Donald Trump, Harvey Weinstein and Jeffrey Epstein).
In his excellent and accessible book “What Gandhi Says”, Finkelstein takes a scholarly look at Gandhi’s writings. Finkelstein, like Orwell, also focuses on ‘courage’. This is different to fearlessness; it is being afraid, but then proceeding with the protest anyway, knowing that the baton or bullet is coming. Gandhi knew that blood needed to be shed for India to be free. He also knew that non-violence would not work in all cases. Certainly not against the Nazis, say.
Himself a courageous activist, Finkelstein believes that the Palestinian cause has much to learn from Gandhi. He saw Gandhi as a role model for the ‘Occupy Movement’ against Wall Street.
It is telling that those fighting against oppression, and for civil rights and education around the world, all find inspiration from Gandhi. Malala Yousafzai was influenced by Gandhi in her quest for women’s education rights in Pakistan. Greta Thunberg regularly espouses his ideas, and the Green New Deal has a deeply respectable Gandhian aroma.
We would all benefit from drinking from the well of Gandhi.