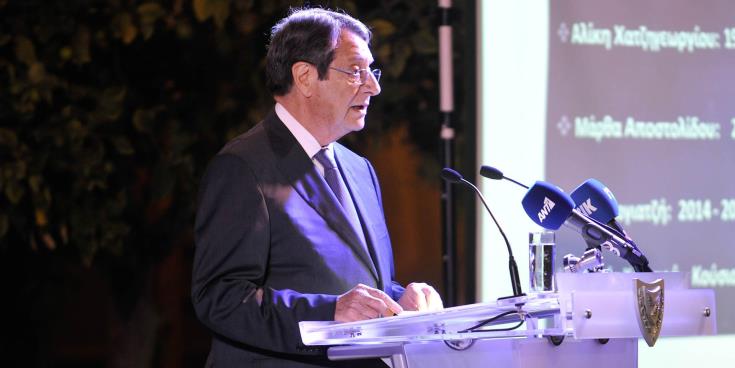 Cyprus President, Nicos Anastasiades, has said that domestic violence cases saw a rise of approximately 30% in Cyprus during the last 20 months.

Speaking on Monday evening during a charity dinner that took place at the Presidential Palace, to mark the 30 years since the establishment of the Association for the Prevention and Handling of Violence in the Family (SPAVO), Anastasiades noted that   according to data of the European Commission for over 20 months now there seems to unfortunately be a rise to domestic violence incidents, expressing his concern that these incidents increased in Cyprus by approximately 30%.

President Anastasiades noted that “we are fully aware of our commitment and duty to protect and support each citizen and particularly the women and the children who are mostly affected by violence, abuse in the family and gender-based violence.”

He underlined that “by making this our first priority, we adopted a comprehensive, targeted policy, remaining fully focused to its implementation.”

Anastasiades said that important steps were made in this framework, noting that the ratification through a law that was adopted in November 2017 of the Istanbul Convention which concerns the Prevention and Combating of Violence against Women and Domestic Violence has been a milestone.

He said that the Cyprus House also passed recently laws aiming at the full harmonisation of Cyprus with the provisions of the Convention, noting that these laws promote zero tolerance against any form of violence against women and their dependants.