Cypriot awards for Services to Culture 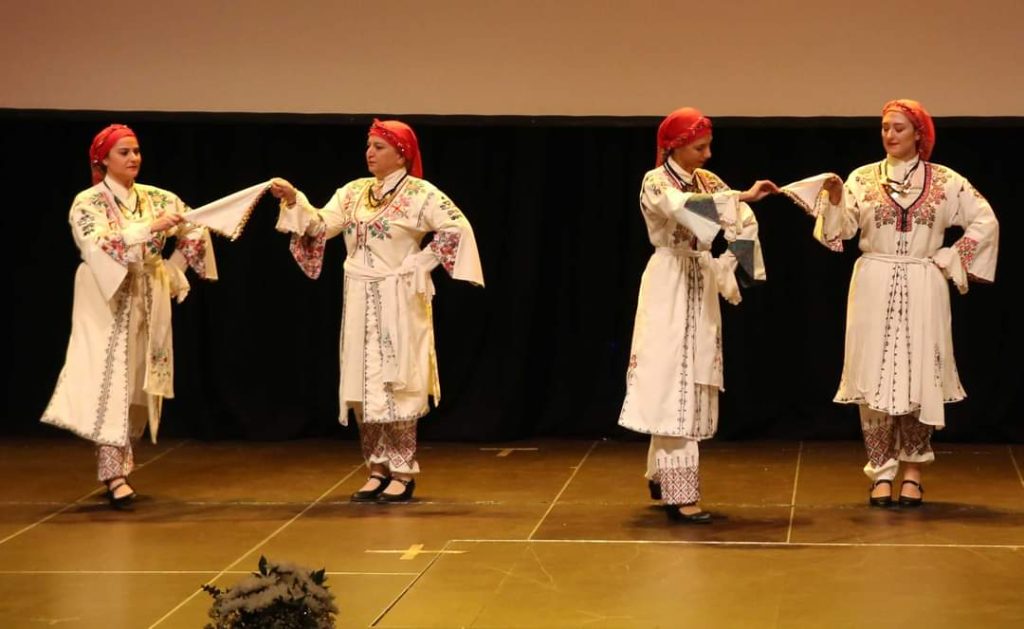 The Award for Services to Culture “Tefkros Anthiasl-Theodosis Pierides” of the C.C. of AKEL awarded to Nina Iakovou and “Hasder”
This year the prestigious “Tefkros Anthias – Theodosis Pierides” Award for Services to Culture of the Central Committee of AKEL was awarded to the sculptress and ceramist Nina Iakovou and the Turkish Cypriot Cultural Folk Organization “Hasder” at a ceremony held at the “Pallas” cultural centre yesterday.

The rationale for the award to Nina Iakovou stressed her contribution to the preservation, continuation and development of traditional Cypriot ceramics. “Nina Iakovou, a constantly renewed and inexhaustible source of creativity, served the art of ceramics and sculpture with dedication and unique zeal and with her creative and inspiring work marked contemporary Cypriot artistic creation”.
“During its long course, the Hasder Folk Arts Association has proven that it treats and serves with real respect the Cypriot folk culture and the efforts for the reunification of Cyprus”, the rationale points.

The ceremony applying the appropriate health protocols was addressed by the two recipients of the Award. The keynote speech was delivered by the General Secretary of the C.C. of AKEL Stefanos Stefanou.

AKEL has once again demonstrated that by awarding artists such as Nina Iakovou and Hasdet it respects and honors culture creators of all the arts and has culture among its top priorities – an inseparable and component part of its daily activity as it has been throughout its history.

Greek Cypriots and Turkish Cypriots together sent a powerful message that Cypriot culture also unites us with its common Cypriot roots and content – a precious instrument in promoting the ideals of friendship, cooperation, peace and all-round progress.
Furthermore, it again highlighted the role culture and artists can and does play in the common struggle for the reunification of our common Homeland and people, in raising people’s awareness and projecting our common Cypriot cultural ties.

A selection of photographs from the successful bi-communal photographic competition organised by AKEL and the Left GUE Group in the European Parliament was also on display.

I welcome you all to the annual ceremony of the “Tefkros Anthias – Theodosis Pierides” Award for Services to Culture of the Central Committee of AKEL.

An established custom with a history spanning more than thirty years, which seeks to reward and recognise the decisive contribution intellectual creators have made to the promotion and advancement of culture in our country.

I extend a special welcome to all the people of the arts and letters who are here with us tonight and honor our event with your presence.

In you we see the Cyprus of creation, solidarity and the hope for a better society. In the difficult conditions we live in, cultural creation becomes even more important for people’s quality of life. We feel even more the need to take refuge in the spirit, truths and sensitivities that culture stands for.

I also welcome to this evening’s ceremony our Turkish Cypriot compatriots, whose presence sends out a clear message that art and culture can constitute an effective bridge of communication that we are so in need of in our times.

Tonight we honor the artist Nina Iakovou and the Turkish Cypriot Cultural and Folklore Organisation “Hasder”.

Nina Iakovou comes from Famagusta and was fortunate to live in a city whose inhabitants recognized early on the value of Arts and Letters as an indicator of the prosperity of any society.

According to archaeological evidence, from the 18th century to the 16th century BC, Famagusta prospered thanks to important pottery and metallurgy workshops.

The city continued to be a cradle of culture in modern and contemporary times, bringing to the fore intellectual creators who have left their indelible mark on the cultural life not only of Famagusta, but of the region too.

Nina Iakovou, the first Cypriot woman to attend sculpture and ceramics classes at the Athens School of Fine Arts in 1953, belongs to this large group of great creators. Since then, with the truth of her soul, she has had a continuous and enviable presence in the field of visual creation, based on the rich tradition of Cypriot folk art. And because Nina creates with the truth of the soul, her work could not help but be influenced by the tragedy of 1974 and the nostalgia of returning to the sea-kissed city of Evagoras, Famagusta.

Hasder Cultural Organization is the first Turkish Cypriot organization that has as its goal to research, disseminate and enrich Cypriot folklore. Since 1977 it has continued to have an enviable presence and contribution to the cultural affairs of the Turkish Cypriot community by organizing festivals, exhibitions, conferences and creating an archive and library of cultural heritage. The Hasder Organisation has cooperated several times in the past with cultural organisations and agencies in the Greek Cypriot community, even when the checkpoints were closed.

For its participation in bi-communal activities it was labelled as an “enemy of the homeland” by Turkish Cypriot nationalist circles. Nevertheless, Hasder continues to relentlessly promote cooperation between Greek Cypriots and Turkish Cypriots by promoting the common cultural elements of the two communities of our people. Hasder’s constant aim is to promote the reunification of Cyprus through culture.

AKEL places Culture, Arts and Letters very high on its political priorities. Our Party’s initiatives and actions for the promotion and support of cultural creation, as well as for the protection of our cultural heritage, are an important part of our activity. These initiatives and actions continued with even greater intensity in the period of the pandemic, which put a lot of pressure and caused immense problems for people involved in cultural creation. AKEL has worked and continues to work for effective support to be provided towards the people of culture, arts and letters. They deserve and owe it to them as a society and as a state. We are obliged to note that this is primarily the responsibility of the government, which has not done what it ought to do.

It is imperative that the Government takes decisions and actions to provide more support, capable of responding to the basic needs and problems of cultural artists.

Direct support for cultural creators is one side of the coin. The other side is about creating conditions, preconditions and terms that encourage, promote and support Culture, Arts and Letters. And first and foremost, we should start by developing an environment that liberates, not stifles or inhibits, the spirit and creativity.
In the 21st century in a society governed by the rule of law it is unthinkable and unacceptable that pages from textbooks are torn up because the Ministry of Education simply doesn’t like the content.

It is also unthinkable for artists (Note: the case of teacher-painter Giorgos Gavriel) to be persecuted for their works.

Such practices and attitudes, which we have seen from those in power, are dangerous first and foremost for democracy and must be abandoned.

The way in which the Government is approaching the issue of establishing a Deputy Ministry of Culture is another example of an outdated and backward mentality. Its refusal to consult on the issue with stakeholders and affected bodies is unacceptable. AKEL supports the establishment of a Deputy Ministry of Culture, but this must be done through adequate consultation. And of course the Deputy Ministry must have all the guarantees so that it will be able to elaborate a comprehensive cultural policy and actively support culture in general.

The exacerbation of the problems facing the cultural sector and the uncertainty as to a rapid return to full activity demands both short and long-term measures.

Towards this end, AKEL proposes, among other things:

1. A substantial increase in state spending on culture through the use of relevant EU funds.

2. The institutionalisation of the participation of cultural agencies/organisations in decision-making processes. This is not happening despite the President’s commitment made twice in as many elections.

3. The provision of effective support of bicommunal activities and institutions that show continuous action in promoting cooperation between the two communities.

4. The professionalization of the status of cultural artists, ensuring basic benefits and rights for a dignified living.

5. The reinstatement of the honorary allowance for retired cultural creators/artists which was cut by the present government.

6. The effective protection of antiquities and cultural heritage in general. Antiquities and their supervision belong to the state and not to the communities. The inclusion of the Department of Antiquities in the Deputy Ministry of Culture being formed makes visible the danger that antiquities, from being a competence of the central state, will end up being shared between the two communities.

7. The construction of important infrastructure projects that have been pending for years, such as the Cyprus Library, the Archaeological Museum and the State Gallery.

In closing, I would like to express once again my appreciation for the overall contribution of the honoured cultural creators, Nina Iakovou and the cultural organisation “Hasder”, and express the wish that they continue to keep the values of cultural creation alive.
Finally, I express my thanks to the Award Committee for the work it has done and the choices it has made.

My warmest congratulations to the recipients for the award, but above all for their work. 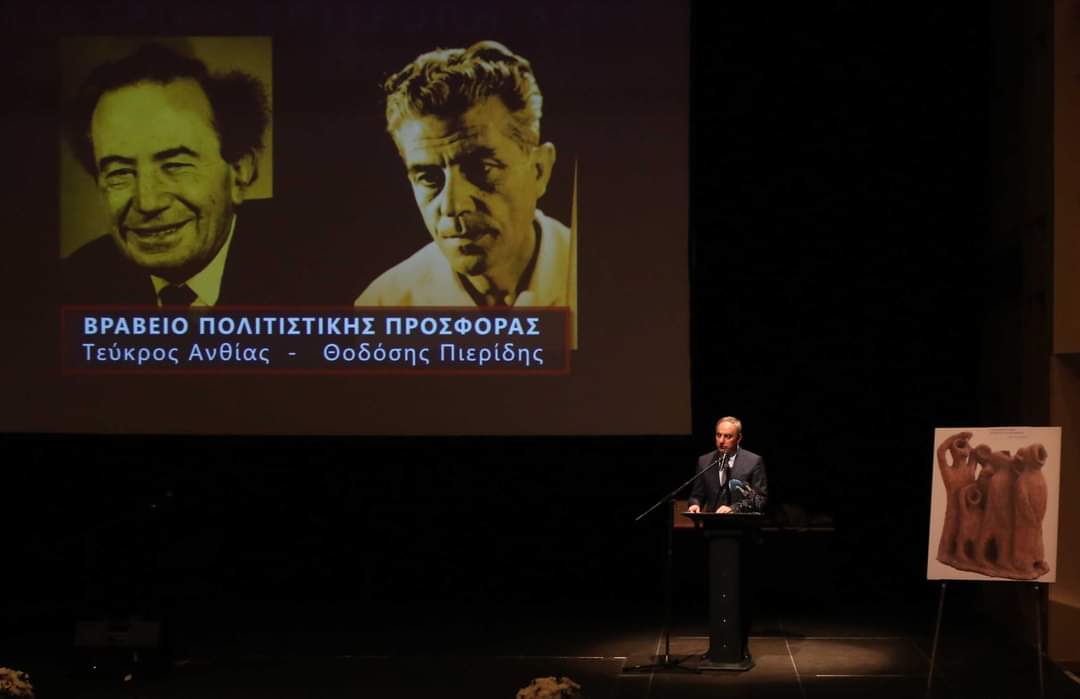 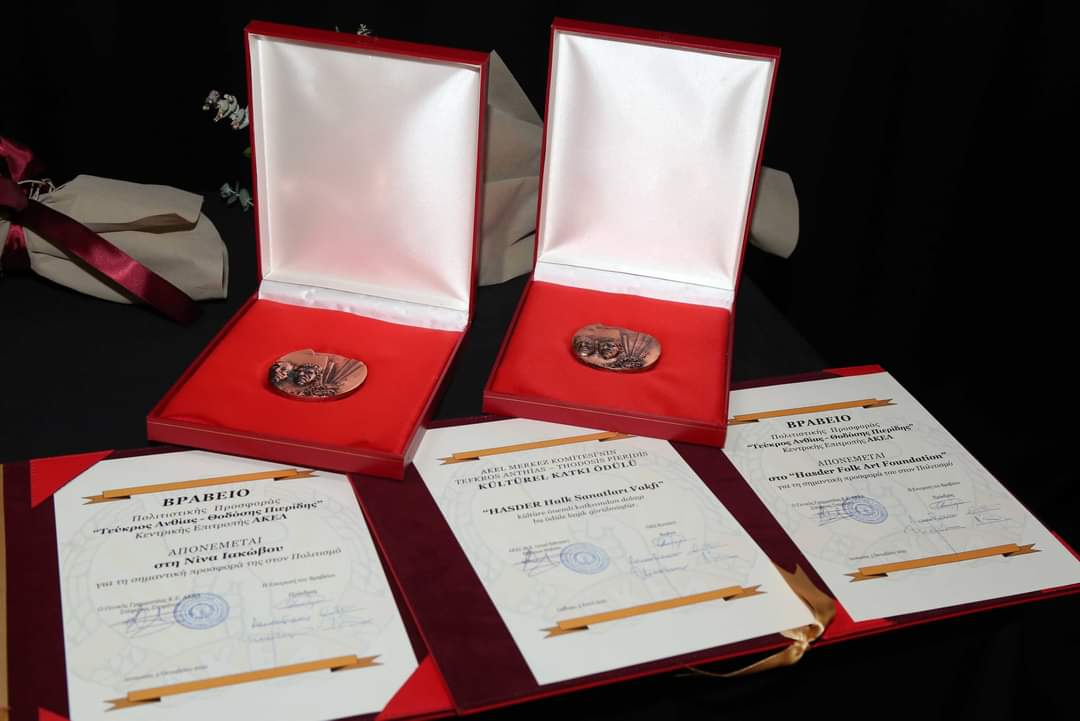 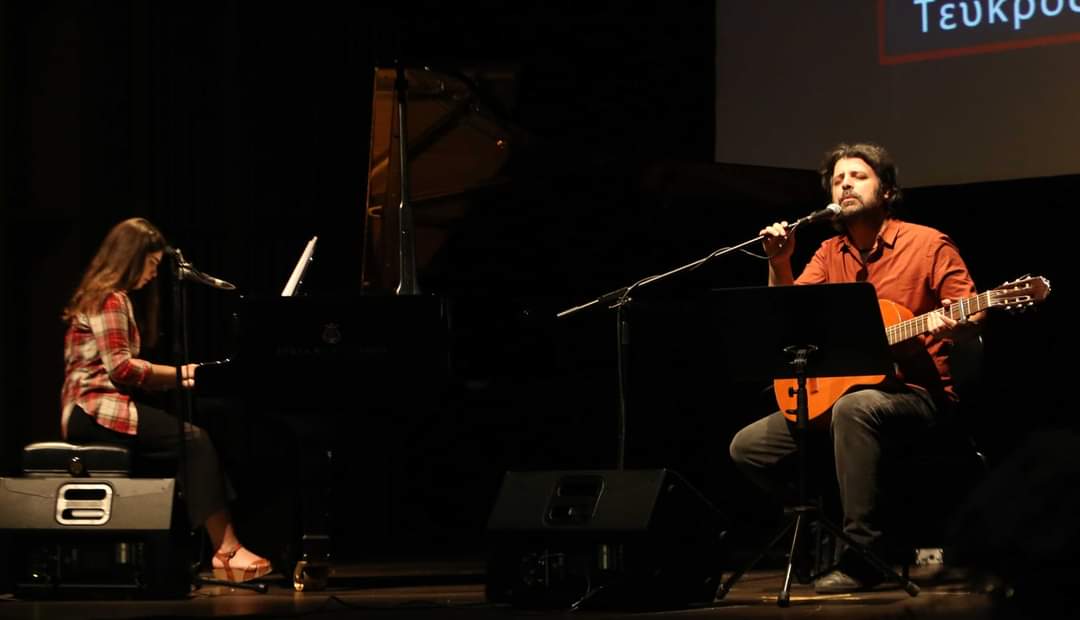 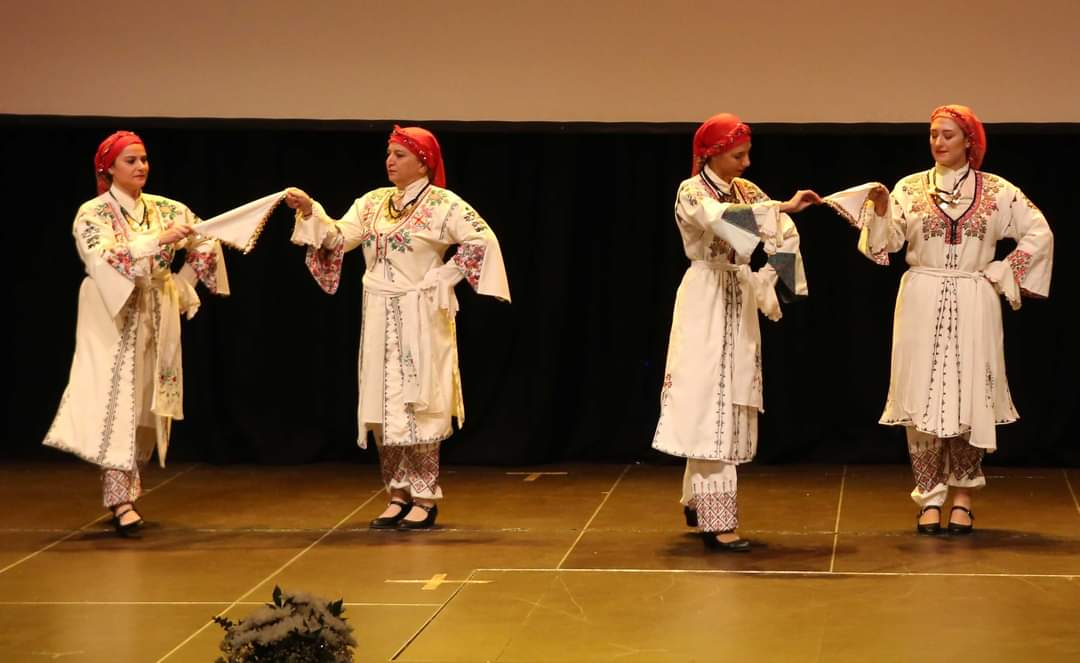 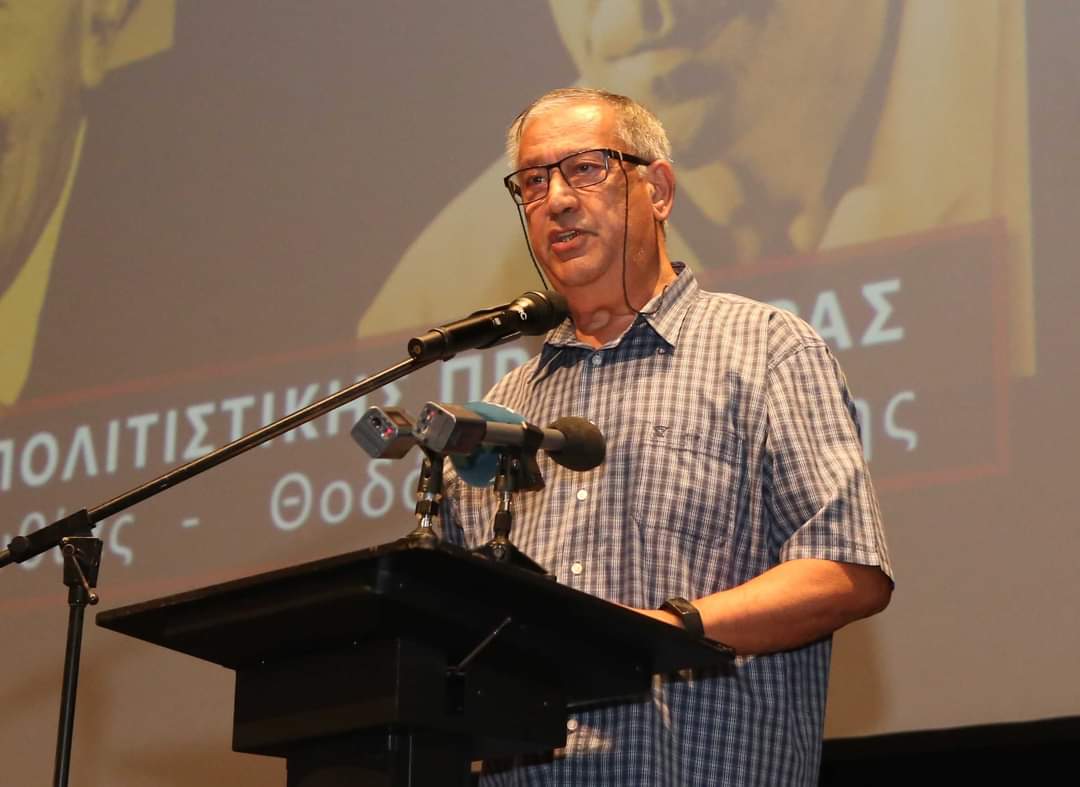 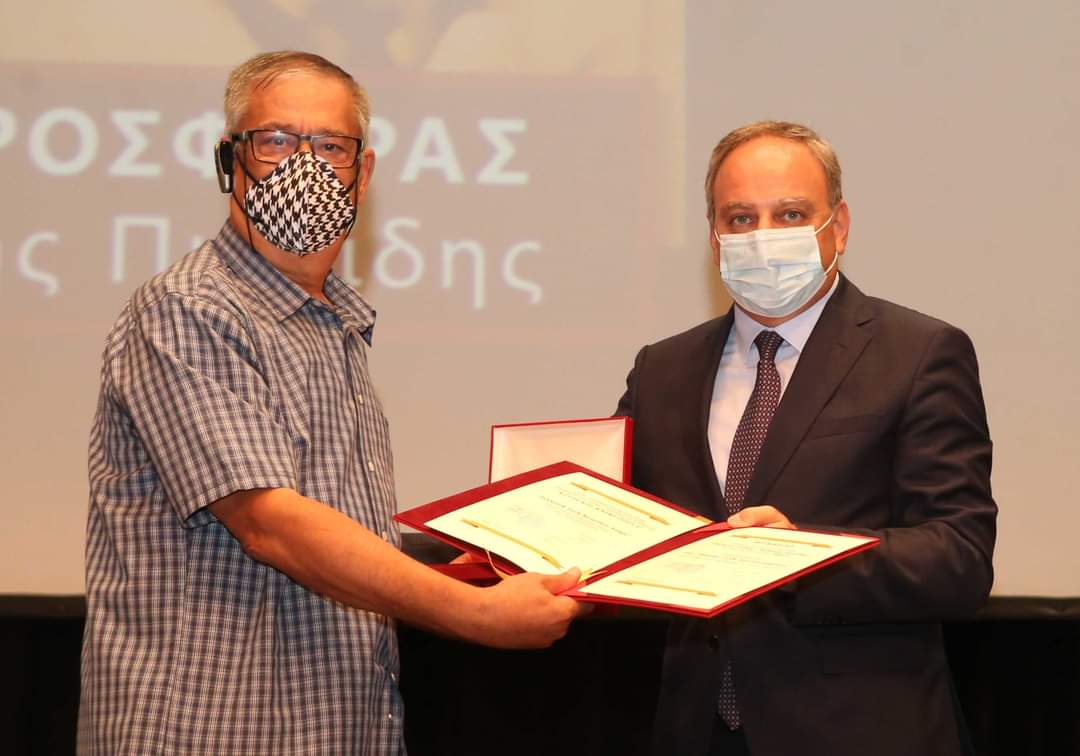 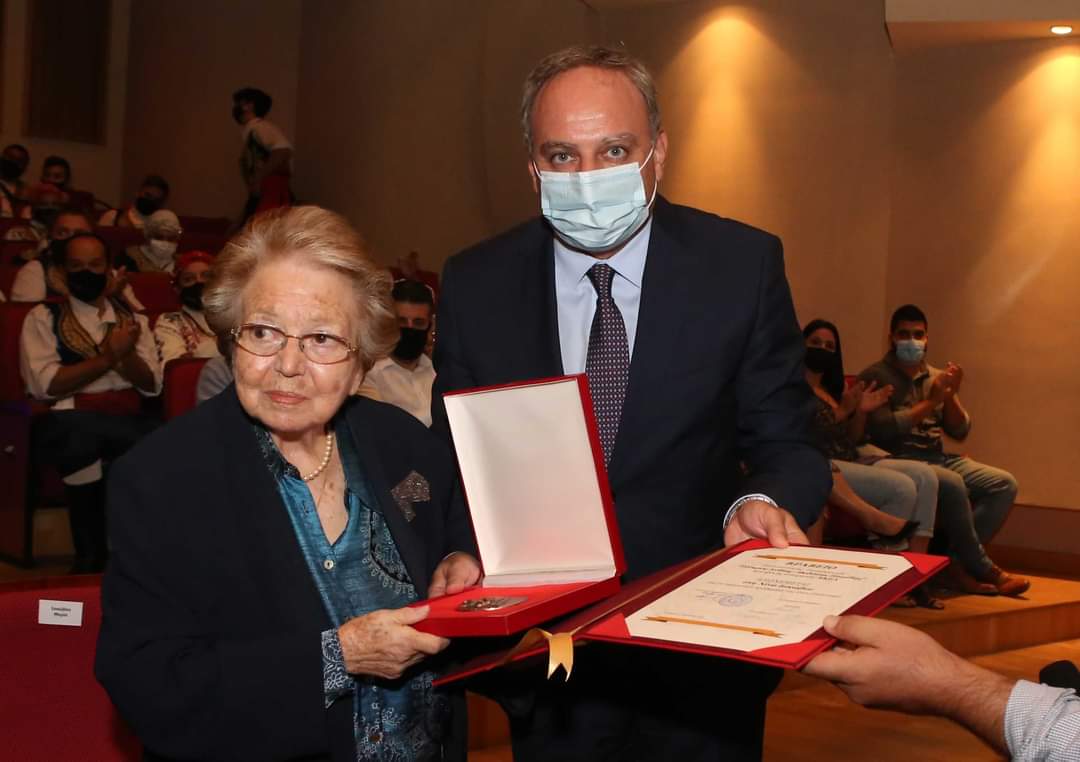 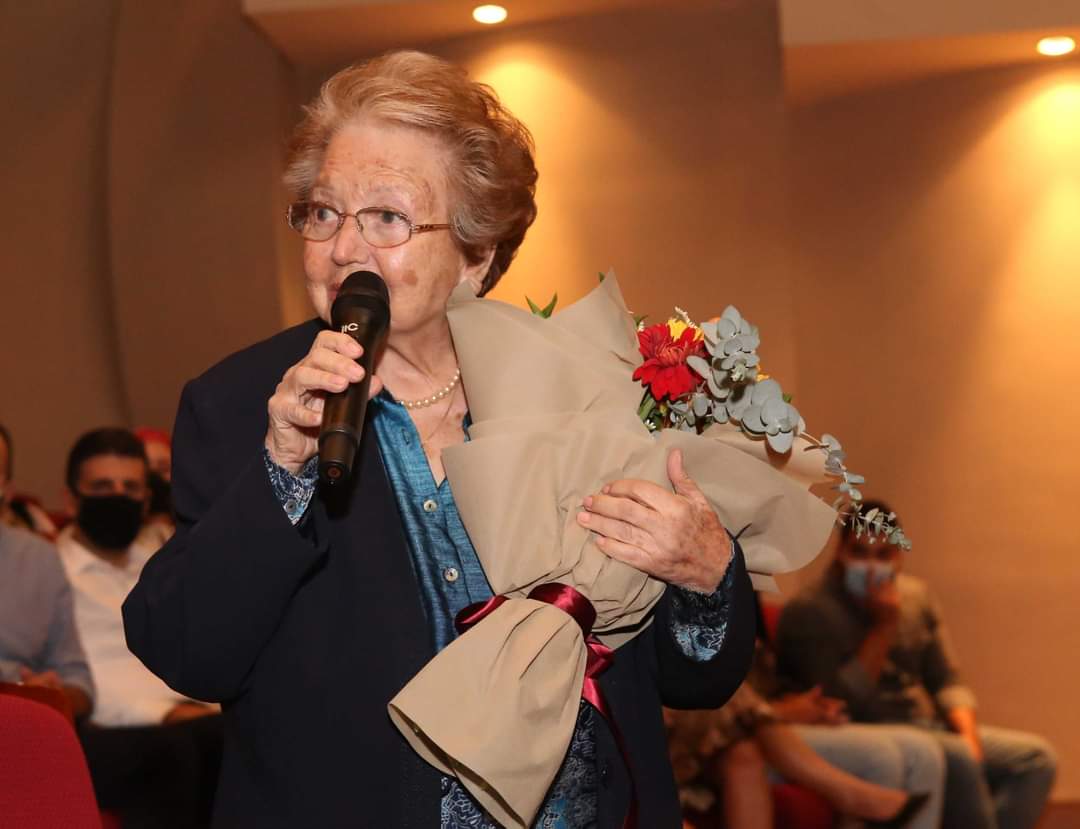 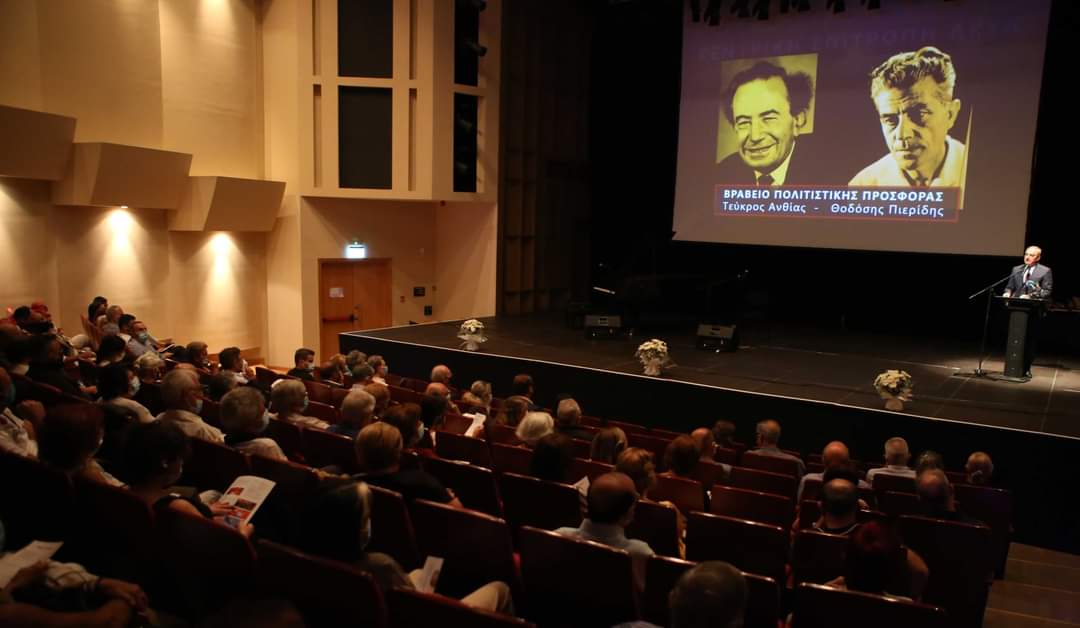 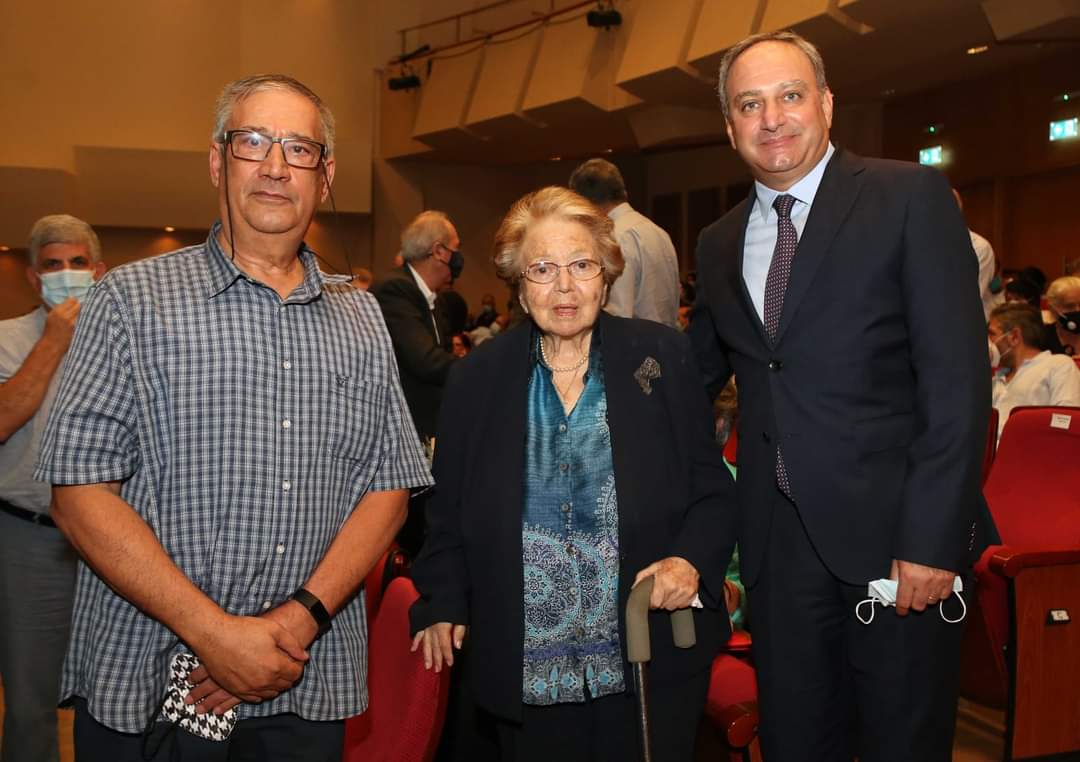 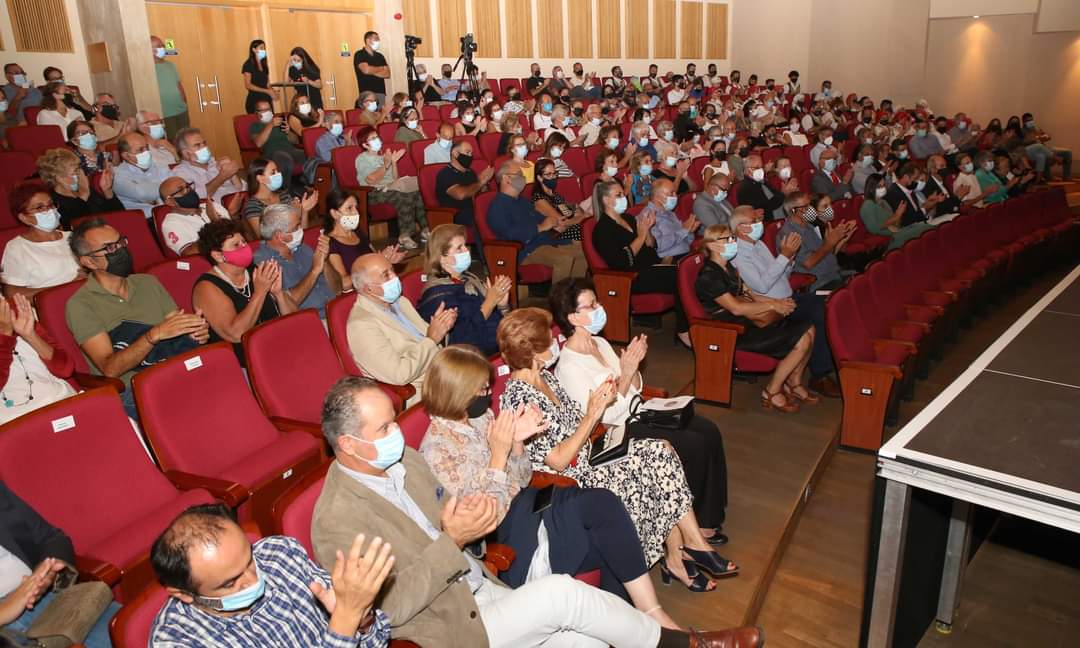 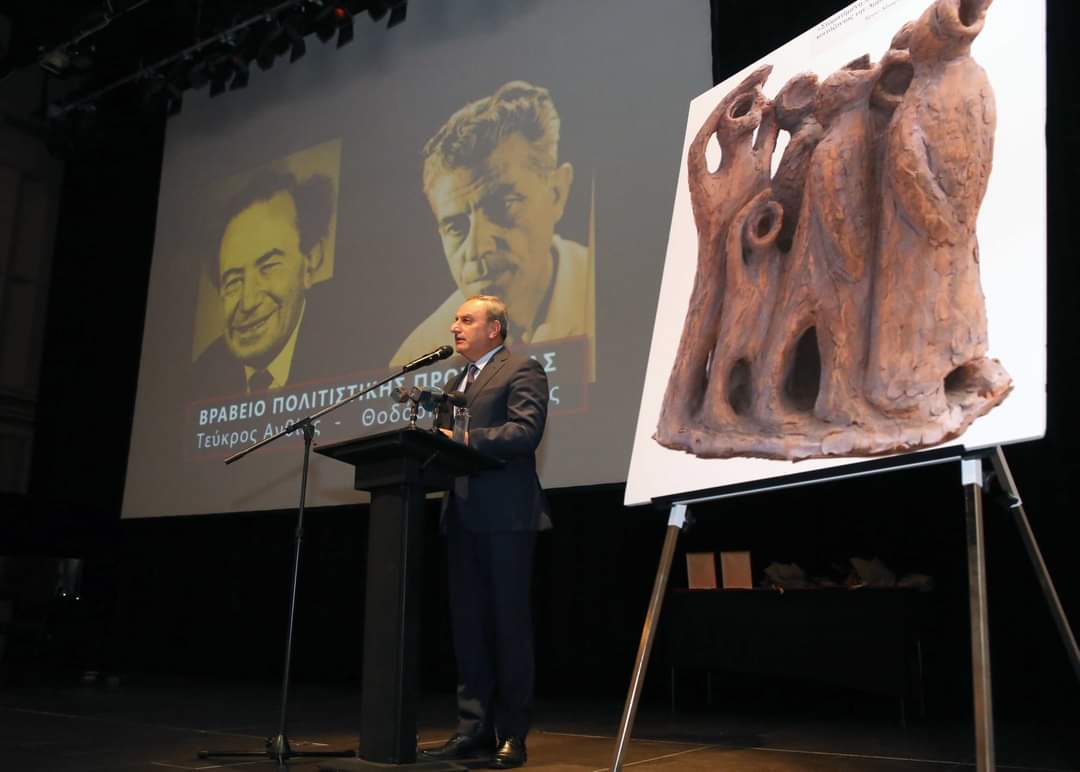 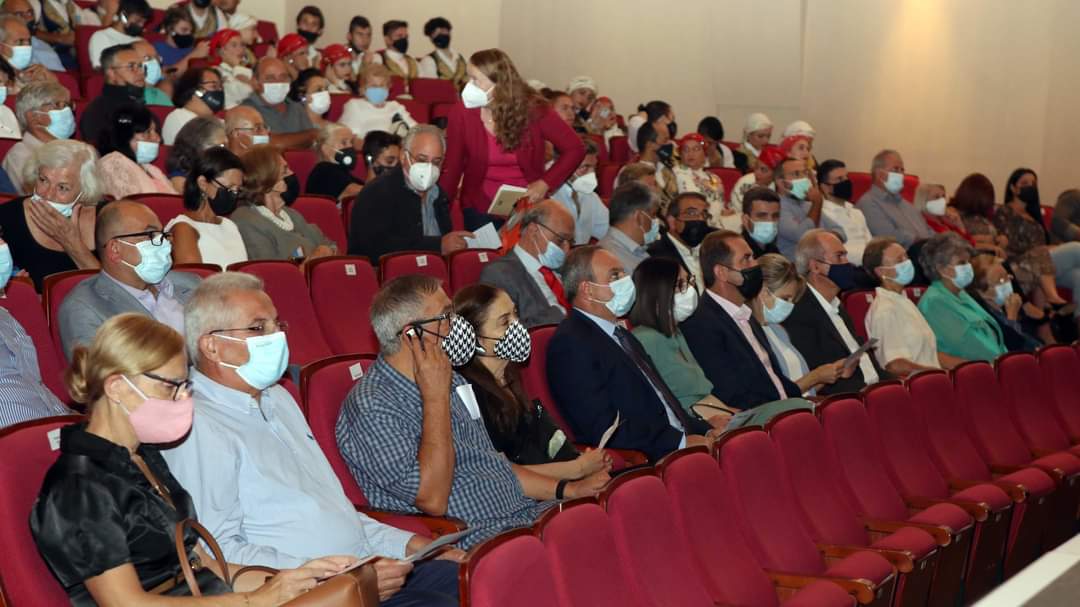