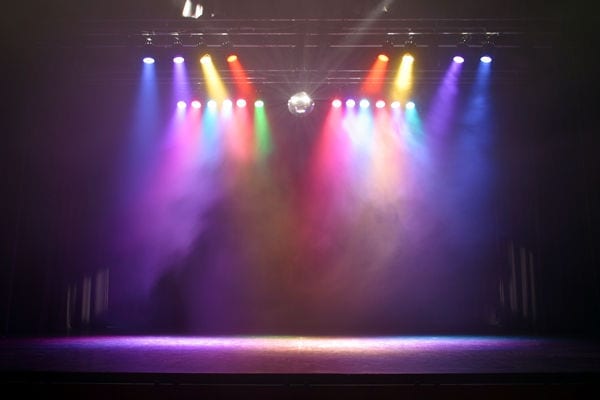 A dark winter’s night 1994. I was sat round an open fire with five friends when out of the blue one asked, “who believes in ghosts?”. Silence. One by one we began to tell our tales of paranormal experiences, the most convincing of which took place in a battered old house in Connemara, Ireland, a country of storytellers. Apocryphal or not it was memorable for being compelling and frightening. Danny Robins’ 2:22 A Ghost Story (Noel Coward Theatre) takes place in Jenny and Sam’s recently bought house in need of some TLC. Together with dinner guests, Lauren, an old friend of Sam, and new partner Ben, they are chewing the cud while outside foxes screech (it’s the mating season) and upstairs baby of the new home birds is a constant background noise on their baby monitor. As the drinks flow and the two blokes spar Jenny exclaims “There’s something in our house…I hear it every night, at the same time.” She convinces everyone to stay up until 2.22.

The first act is a tepid affair with Ian Dickinson’s spook inducing soundtrack providing most impact. The tension between the disparate characters is of more interest than thoughts of the supposed ghoul. The ensemble cast make a good fist of it with Jake Wood (Ben) a likeable Jack the Lad builder and wind up merchant who carries on where he left off  in EastEnders while Hadley Fraser (Sam) also gives an effective portrayal of an arrogant and sceptical man who finds his Cockney rival a bit of a challenge. Of course all eyes are on Lily Allen, making her debut on the West End stage. Dunster keeps her busy, especially in the opening half hour as she warms to her task in making Jenny a neurotic woman for whom hearing is believing. Julia Chan (Lauren), better known for her TV and film work adapts well to her new surroundings.

As we approach the ghostly hour expectation levels rise but the climax is not enough of a shock horror to make up for two hours of psychodrama. Dunster does what he can to build the tension but if truth be told I was far more amused than I was spooked, laughing at the silly behaviour and attitudes of apparently smart folk. Every time the red lights lit up the proscenium arch accompanied by a primal scream I smiled at this lame attempt to frighten. The 1990’s embers and rugged Irish coast spooked me far more.

Overflow (Bush Theatre) is the darkly funny follow-up to up-and coming queer playwright Travis Alabanza’s smash hit Burgerz. Set in the public toilet from hell, it follows Rosie (Reece Lyons), a twenty-something trans millenial, who monologues, quips, reminisces and does whatever else she can think of to forget about what is waiting for her on the other side of the bathroom door – the unrelenting nightmare that is contemporary Britain.

Through her tongue in cheek anecdotes of drunken nights out, Rosie paints a picture of the sisterhood and solidarity that you only get in public toilets, but also the growing national resentment towards trans people that this country is becoming internationally known for. If you’ve got friends or loved ones who are trans, this is a great primer for what they’re going through, but aside from that it’s a sharp, funny, moving and inventive piece of theatre from one of London’s most exciting emerging talents.

Fever Pitch (Hope Theatre – Islington) is an energetic adaptation of Nick Hornby’s memoir and a description of the occasional ups and frequent downs of being an Arsenal fan, or any die-hard football fan. Jack Trueman frantically narrates the story of depressed, obsessed, Arsenal fanatic Nick while the other three cast members (Ashely Gerlach, Louise Hoare and Gabrielle MacPherson) jump in and out of every other character in Nick’s life – his parents, friends, girlfriends and the crowd on match days – the result is a frenetic 90 minute journey through the highs and lows of football fandom.

Football fans will love it, the Arsenal fans will be cheering in their seats and the non-football fans will come away with an understanding of what it’s like to love your football club more than anything else. A paean to the highs and lows of football.