Spehar holds farewell meeting with Cyprus President, hopes for a solution sooner rather than later 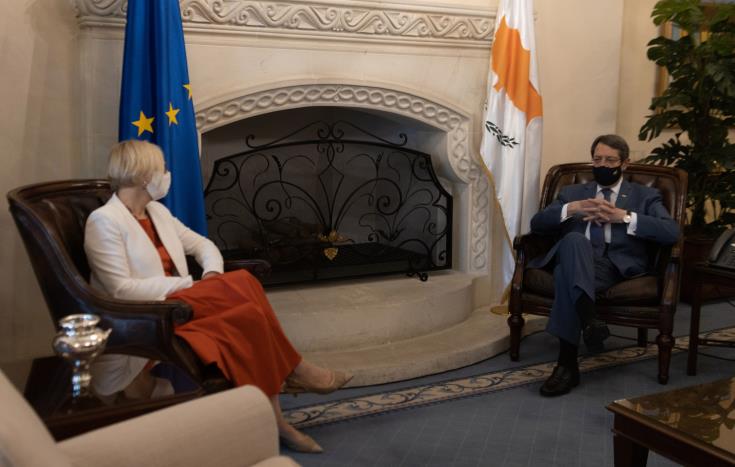 UN Secretary General`s Special Representative in Cyprus, who is leaving her post at the end of September, has expressed the hope that a Cyprus settlement will come much sooner rather than later.

Spehar, who was received on Friday by Cyprus President Nicos Anastasiades at the Presidential Palace for a farewell meeting, noted that she has been very impressed by the Cypriots, by their perseverance and by their desire for peace. She will also have a farewell meeting on Monday with Turkish Cypriot leader, Ersin Tatar.

“I came to the Palace to see Anastasiades ahead of his upcoming trips and especially to thank him and his government for all of the cooperation and support over the five plus years that I’ve been here on the island, Spehar said in statements after the meeting which lasted just over an hour.

She noted that “there are a lot of people on this island, on both sides, who continue to work for peace. Sometimes they are very courageous and it is important what they are doing and what they are saying. They want to see a better future for this island, for everyone, and I hope that they will continue.”

“Because it is very important to get more people involved in the peace process,” she added.

She recalled that the UN Secretary – General Antonio Guterres said that he will not give up, and expressed hope that the Cypriots will also not give up.

Spehar thanked everyone that she has worked with all of these years. “I feel that I have been very embraced by the island overall all of this time. It has been a marvellous experience,” she noted.

She went on to say that “whatever happens in the future I wish the best for this island and I await the day of the solution to the Cyprus problem.”

“I hope it will come much sooner rather than later,” she noted.

“I will always have a very soft spot in my heart for Cyprus and for the Cypriots,” Spehar concluded.

Cyprus has been divided since 1974, when Turkish troops invaded and occupied 37% of its territory. Numerous UN backed talks to reunite the island have failed to yield results.