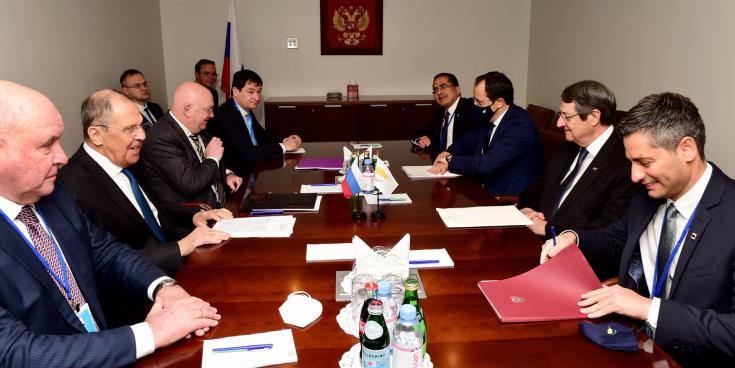 Russian Foreign Affairs Minister Sergey Lavrov has reiterated to Cyprus President Nicos Anastasiades his country`s position of principle that “it remains committed in reaching a solution of the Cyprus problem in full compliance of UN resolutions and the Security Council`s decisions.”

According to a presidency press release, in statements after a meeting with Lavrov in New York, where they are both attending the 76th UN General Assembly, President Anastasiades said that it was “a very interesting meeting,” during which he had the opportunity “to brief him on recent developments and to express my warm thanks on the stance that Russia has maintained at the Security Council following the recent events of Turkey violating the status quo in Famagusta.”

President Anastasiades added that he also had the opportunity to convey “our positions and our insistence on the continuation of the dialogue to reach a solution of the Cyprus problem, always on the basis of UN resolutions.”

Lavrov, the presidency press release says, reiterated Russia`s position of principle that it “remains committed to reaching a solution in full compliance with UN resolutions and Security Countil decisions.”

Replying to questions from Russian media President Anastasiades said that during the meeting “I expressed my gratitude, my warm feelings for the principled stance of the Russian state and the Russian delegation, for their support for the implementation of the Security Council resolutions and for their support of the strong wording of the Presidential Statement of the President of the Security Council.”

Replying to a question on whether “that was a step” for the issue of Varosha, the President said that “they are always trying their best through the diplomatic channels.”

Turkey invaded Cyprus on July 20, 1974. Numerous UN backed talks to reunite the island have failed to yield results. Varosha, the fenced off section of the Turkish occupied town of Famagusta, is often described as a ‘ghost town’. In October 2020, Turkish authorities announced their intention to unilaterally reopen Varosha. On October 6, 2020, the SG emphasized in a statement “the position of the United Nations on Varosha remains unchanged and is guided by relevant Security Council resolutions” and stressed the “need to avoid any unilateral actions that could trigger tensions on the island and undermine the return to dialogue or the future success of talks.” Since that statement, Turkey’s unilateral reopening has not abated, and on July of 2021 President Erdogan announced that part of Varosha would be reopened and administered by the illegal regime in the occupied Cyprus.