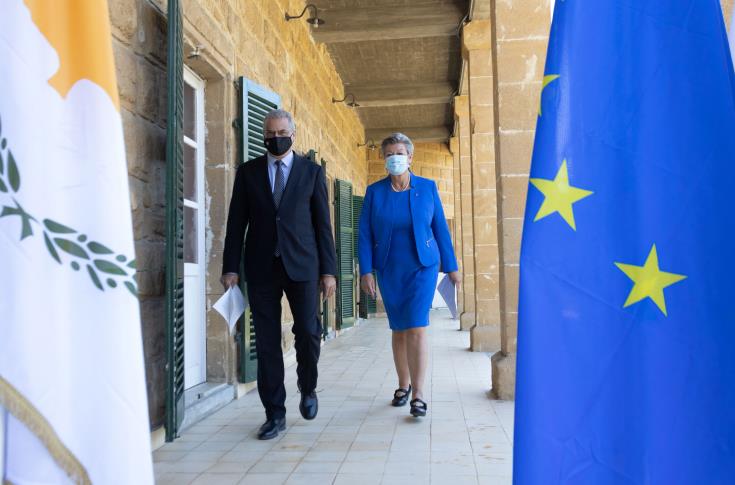 European Commissioner for Home Affairs Ylva Johansson said she hopes to find common ground with Turkey regarding the irregular arrivals especially towards Cyprus and Italy in her forthcoming visit to Turkey in two weeks.

Replying to a question on the different EU policy towards Belarus and Turkey regarding migration, while paying a visit in Cyprus, the Commissioner said that there are significant differences with Lukashenko and Belarus and the cooperation the EU needs to have with Turkey. As she said Lukashenko can’t deal with EU sanctions and is acting in desperation importing people with the only purpose to push them in the EU and Lukashenko is not a partner that the EU is ready to cooperate with.

Regarding Turkey she said that it’s not always easy to cooperate with the country but added that she thinks that’s the way forward.

“We have faced a lot of challenges in our relation with Turkey and we are in a situation where these relations are increasing, being better so that’s why we are now in a position to relaunch this high – level migration dialogue and that’s why I’ m going there in two weeks. So, let’s hope that we can find a common ground so that we can both prevent irregular arrivals from Turkey, especially towards Cyprus and Italy that we have seen in the recent years,” she said.

She added that it is also important to help Turkey also to prevent irregular arrivals towards the county.

Asked why Frontex is not activated to prevent migration flows in Cyprus, the Commissioner said that Frontex is present in Cyprus and doing a quite good job but there are limitations because they can only protect external borders and is not possible to use them in the Green Line in Cyprus

She also said that the Commission and the agencies have really stepped up the support to Cyprus but what is needed is also the support and solidarity of other member states when it comes to relocations and that’s why the new pact on migration and asylum is needed, to have the regulatory framework to make it mandatory for member states to show solidarity when a member state is facing the high pressure of applications.

“We can’t continue on ad hoc voluntary basis” she pointed out.

The Commissioner expressed the solidarity of the European Commission’s to Cyprus, saying that the country is the member state that is facing the highest number of asylum application per capita.

“You also are in a geographical position that put special challenges towards Cyprus. That’s why is important that we work together and that we show solidarity and that we support Cyprus”, she noted

She also said that she impressed on how they have increased and developed the asylum processes in Pournara campus that she has visited.

The Commissioner referred to the three pillars for managing migration in an orderly way. As she said, “we need to understand that migration is an international phenomenon, meaning that we need to work with third countries”.

“That’s why I have be putting a lot of emphasis in travelling to have direct talks with third countries. And this visit in Cyprus is very timely. I wanted to go here before I go to Ankara in two weeks to have the high-level dialogue with Turkey’s government, to really understand and to hear from you on the challenges that you are facing,” she added.

Referring to the case of Afghanistan, she said that there’s a lot of fear that the country will collapse or that there will be a humanitarian catastrophe and it’s important to stand by Afghani people and give support in Afghanistan and in neighbouring countries. She added that this’s the approach from the Commission to reach third countries, to prevent irregular arrivals but also to promote returns and readmission.

The second pillar, a Johansson said, is to have the proper systems in each member state to manage migration and to have enough capacity. She said that they are focusing on building up better capacities in Cyprus but also to step up on the return procedures with agreements with third countries but also on the internal processes in Cyprus, as well as integration.

She added that the third pillar is to have a proper regulatory framework in place and a European system for managing migration and asylum, adding that she proposed that a year ago in the new pack on asylum and migration and expressed gratitude for the support from Cyprus and the MED5 on this.

“It’s important now that we take further steps on progressing with this, because countries like Cyprus really need the solidarity also in the form of relocation. And that’s why we need a proper legal framework for that”, she said. She also noted that it’s also important to have a proper screening of people that could impose a security risk, and to have a proper system in place to prevent and protect the fundamental right to apply for asylum and to protect vulnerable individuals.

“We have stepped up our support from the Commission tools to Cyprus financially and now in the new budget MFF we have giving extra money just because of the high pressure you are facing with the migratory flows”, she said. She also said that Frontex, Europol and IASO agencies are here working extremely good with Cyprus’ services, to be able to give practical support and solidarity.

The Commissioner also said that on Wednesday she was going to present to the College of the Commissioners a new anti-smuggling plan in order to have better cooperation with the third countries, to step up significantly to prevent smuggling and to step up on returns on those not legally staying.

In his statements Interior Minister Nicos Nouris said that because of Cyprus’ particularities, the country needs additional support and assistance from the European Commission and criticised once again Turkey’s stance as regards the issue of migration and the exploitation of illegal immigrants through the Green Line.

He said that Cyprus takes measures for sea control and otherwise and said that he had the chance to brief the Commissioner about the enormous progress that has been made in asylum seekers.

He said that since January 2021 when the new asylum policy was implemented, the authorities managed to examine more than 8,500 applications and manages more than 7,000 rejections. He said however that from the 7,000 rejections less than 300 applicants were able to return to their countries of origin which is problematic.

Nouris said that this is an issue most Mediterranean countries are faced with and it was brought up during the recent ministerial summit of Med5 in Malaga. He said that Med5 ministers decided to ask the EC to protect the European borders and the Green Line in Cyprus and to call for an immediate conclusion of return agreements.

The Interior Minister also said that he explained to the Commissioner that Cyprus supports any measure aimed at reducing Afghan migration flows to Europe. He assured that despite the difficulties encountered in the discussions on reaching an agreement on a single European Migration and Asylum policy, no European state alone can manage the flows or can take the burden itself and coordinated action is needed.

Replying to a question the Minister said that the Commissioner was presented with a proposal as regards the Mennoyia Migration Centre, which has been completed with national funding , adding that Cyprus will seek for additional assistance from the EU. Nouris also said that a second centre is planned and Cyprus seeks an additional grant of 35 million for its construction. He clarified that part of these money will go towards the Mennoyia centre.