EU not in favour of a two-state solution in Cyprus, EU Ambassador to Turkey tells CNA 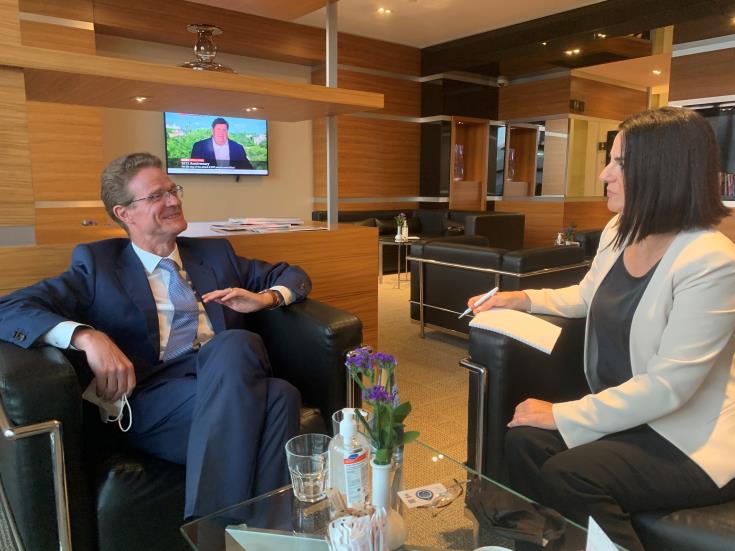 The EU is clearly not in favor of a two-state solution in Cyprus, said Nikolaus Meyer-Landrut, Head of the EU Delegation in Turkey, adding that during his contacts with the Turkish leadership, the body of work are EU conclusions and decisions.

The EU Ambassador also said that Turkey’s role in the de-escalation of tension in the Eastern Mediterranean needs to be acknowledged and that it may now be possible to see progress in relations with the EU.

In an interview with CNA, the EU Ambassador in Ankara says in relation to Cyprus that “the EU supports a UN process based on the relevant Security UN Council Resolutions, but the process as such is a process conducted by the UN, not by the EU. And the European leadership, the President of the European leadership, when she was recently in Cyprus, has clearly stated that she is not in favour of a two-state solution. So, we have clearly said on several occasions that the two-state solution is not compatible with the resolutions of the UN.”

Asked if there are difficulties when meeting with Turkish officials to discuss Cyprus, Meyer-Landrut said that he doesn’t report on his meetings “but I can assure you that the basis of my work are the Conclusions which the EU has taken on these issues. I am not representing the positions of individual member states, I represent the views of the EU as much as there is a view of the EU.”

The Turkish authorities, he went on, make known their views “and I will present the European view. And we have this in many issues.” “There are parts that there is a diversion of views and so we need to accept this” the EU diplomat said, adding that “this is quite known in diplomatic life.” He also said that the Delegation is not the channel when dealing with the Cyprus issue in Turkey.

As for the tension seen in relations between Greece and Turkey, the Head of the EU Delegation said that the Union welcomed the exploratory talks, the two countries resumed. “Diplomacy is the only way to solve the difference,” he said and expressed hope that these exploratory talks will continue and the two sides will be able to find ways forward.

When it comes to EU-Turkey relations, Ambassador Nikolaus Meyer-Landrut notes that the European Council has said that it is willing to engage in a positive agenda “if a certain number of expectations are fulfilled.”

“And this is one of the key issues for the de-escalation on the Eastern Mediterranean. De-escalation has taken place, Turkey has played a role, one needs to recognise this and now we have to work on the individual elements where perhaps progress and relations are possible,” he concluded.