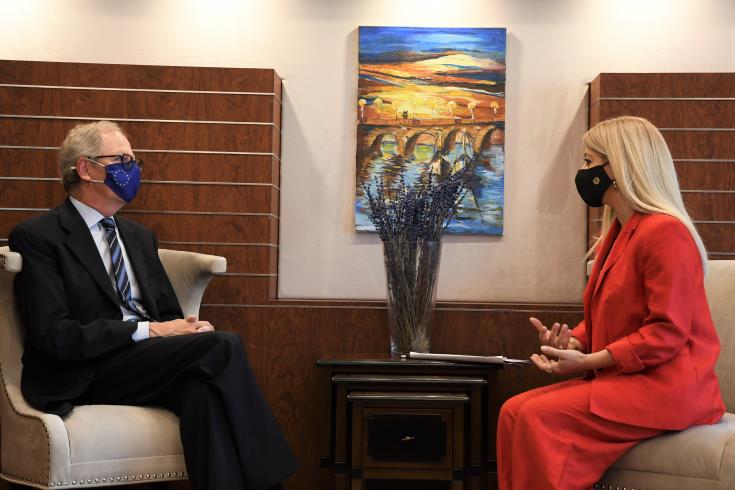 In a meeting on Tuesday, Demetriou thanked Sweden for its contribution to the UN Peacekeeping Force in Cyprus and the country’s contribution in solving the Cyprus problem.

At the same time, Ambassador Hagelberg reconfirmed the firm position of principle Sweden maintains regarding the UN resolutions on Cyprus.

During the meeting, Demetriou criticised the Turkish provocations in Cyprus, especially in the fenced off area of Famagusta, underlining that the priority of the Greek Cypriot side is the resumption of negotiations, based on international law, the relevant UN Security Council resolutions and European principles with the aim to reunite Cyprus under conditions of peace and stability.

The Turkish demands for a two-state solution, in violation of UN resolutions and the agreed framework for a settlement, will never be accepted by the Greek Cypriot side, nor by the international community and the EU, she said.

The Swedish diplomat reconfirmed his country’s firm position of principles on the Cyprus issue, in accordance with the relevant UN resolutions.

During the meeting, the relations of friendship and cooperation between Cyprus and Sweden and their Parliaments were underlined. At the same time, the common will to further enhance relations in areas of mutual interest such as gender equality, renewable energy and climate change was expressed. The two agreed that strengthening parliamentary exchanges and cooperation will contribute to the exchange of best practices in important areas for the benefit of both peoples.

The House President stressed the significance of solidarity and developing common action to handle effectively common challenges. She also described Sweden as a model country in gender equality issues and expressed her intention to undertake specific initiatives and actions to promote these issues, including the representation of women in decision making bodies in conjunction with efforts for a peaceful resolution of the Cyprus issue and the implementation of UN resolution 1325.

Turkey invaded Cyprus on July 20, 1974. Numerous UN backed talks to reunite the island have failed to yield results. Varosha, the fenced off section of the Turkish occupied town of Famagusta, is often described as a ‘ghost town’. On October 8, 2020, the Turkish side opened part of the fenced area of Varosha, following an announcement made in Ankara on October 6. Turkish Cypriot leader, Ersin Tatar, announced in July a partial lifting of the military status in Varosha. Both the UN Secretary-General and the EU expressed concern, while the UN Security Council called for the reversal of this course of action.