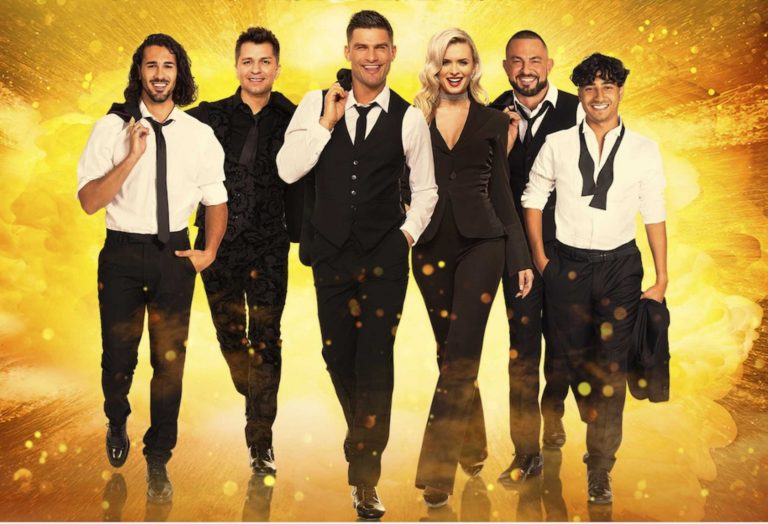 The Nimax Theatre’s Rising Stars Festival is a wonderful innovation offering opportunities to young talented producers to present their work in the West End for the first time. Public Domain (Vaudeville Theatre) began life online at the Southwark Playhouse which is very appropriate as this verbatim musical is a leap into the ‘vloggersphere’ and their adventures on social media. A subject that usually makes me yawn at its ubiquity and inanity but Jordan Paul Clarke and Francesca Forristal managed to dilute much of my cynicism. Written and performed by them, with Adam Lenson’s energised direction, they have created a musical of our time. At seventy five minutes it will hopefully hold the attention of its intended audience, millennials and younger.
The worldwide community of vloggers – those who regularly upload videos onto their own channel – spend countless hours posting this stuff online and we are taken deep inside the minds of these technological junkies, their likes, dislikes and obsessions. Facebook come in for a bit of a pasting and part of Matt Powell’s clever techy design includes the following illuminated text “Every Facebook User Uses Facebook Terms Of Service Which Releases All Of Facebook From Common Law Claims”. That said the show also highlights the enormous benefits of being savvy online and Clarke and Forristal are terrific in playing a plethora of colourful characters which they do throughout. Their sharp synergistic movements, choreographed by George Lyons, are a heady mix of digital and real world though I did occasionally get lost in just exactly where we were in proceedings.
The music is the kind of stuff I imagine you would hear in clubland, a thumping unrelenting beat. Hypnotic and trance like which is of course the unreal world inhabited by vloggers and their digital friends. The lasting impression, as I laughed at some of the crazy content, is that of millions of desperate humans connecting with one click. A world that offers virtual validation but as we have found during the pandemic without the real thing we remain lost and lonely.
Meanwhile Sotira Kyriakides gets equally lost but in gyrations…
Avid ‘Strictly Come Dancing’ fans like your esteemed reviewer think that anyone who confesses to not liking the show is simply mad! What’s there not to like? The beautiful, lithe dancers who manage to perform the most acrobatic and graceful feats of endurance with such grace and panache? Or the fact that the show manages to pack such an addictive combination of entertainment, energy and fun?
Following a very popular national tour, Here Come the Boys has at long last arrived at the London Palladium, a gloriously fitting setting for such a talent showcase. ‘Strictly’ stars Aljaz Škorjanec, Pasha Kovalev, Robin Windsor and Graziano di Prima compete to be crowned ‘King of the Dance.’ They are joined by ‘Strictly’ finalist Karim Zeroual, the wonderfully nimble and talented children’s TV presenter, who hosts the show and joins in the dancing bonanza. Based on the audience’s clapping response, Karim decides which of the main dancers has completed the best routine in a number of dance styles so as to be deemed the worthy winner in each heat.
The four main dancers, alongside the wonderful Nadiya Bychkova – another ‘Strictly’ favourite – and a troupe of amazing male and female professionals, definitely give the audience their money’s worth as they strut their stuff. Don’t miss what must be the most exhilarating show in London, an especially invigorating tonic after the lethargy of lockdown.