Barrington Dutton’s Under 16 Green swept aside their opponents in their Challenge Cup tie winning 6-1. More importantly, the game was played in a fair, courteous manner, so well done to the players, as well as family and friends who came to support. Goals were scored by Louis O (3), Louis H, Michael and Alexander. Alexi G was named Man of the Match who gave an assured performance at centre half by winning and distributing the ball effectively.

Mike Koumi and Adam Broomfeld’s Under 12 White remain unbeaten in the league thanks to a convincing 6-1 win. They were completely dominant in the first half with the boys playing flowing attacking football and some great finishing saw them go into the half time interval 5-0 up. The team eased off a bit in second half scoring just one more before conceding with last kick of game. Goals were scored by Chris (2), Georgie, Harry, William and Man of the Match Davide.

There was a mixed bag results in the Under 15 age group. Michael Pieri’s Under 15 White lost 6-2 to their title chasing opponents in a match played on a soggy and sticky pitch. A poor first half saw the Under 15 White go into the break 5-0 down. The boys were asked to dig in, show pride, play their football and win the second half. Credit to them they did just that. They also missed three one on ones and hit the bar too, but the damage had been done in the first half. Man of the Match Noel Allen got one goal as he drove the team on. Emmanuel O got the other goal.

Chris and Jimmy Mousicos’ Under 15 Gold dominated their game and only poor game management denied them a deserved win as they went on to draw their game 2-2. Kayden and Ziya with the goals.

Harry Theodorou and George Sammoutis’ Under 15 Silver also drew their league match, 1-1, in what was a very good competitive match. The boys played with hunger, organisation and concentration with their goalkeeper saving a penalty. They could’ve snatched all three points but for a shot cleared  off the line in last minute of the game. George said he was “…very pleased with our performance today.” Goal scorer was Rohan Biswas who was also named Man of the Match.

By contrast, Mario Christoforou and Nick Lingis’ Under 15 Green crushed their opponents in the Challenge Cup 9-1 to progress to the next round. Cameron J (3), Joe K (3), Brendan L, Nathan L and Man of the Match Jack A got the goals.

Savva Zavros and David Poncia’s Under 14 Gold bowed out of the Challenge Cup gracefully against a team who currently sit in second place in the division above. Even though they lost 6-2, the boys refused to go out without a fight and showed excellent composure, determination and perseverance! Both Savva and David were very proud of their team’s performance. Goals were scored by Mustafa and Jon with Archie named Man of the Match.

Nick Georgiou and Dino Savva’s Under 18 Gold won again in the league, this time 5-2. The boys created many chances and the score could have been much bigger. More discipline needed to maintain their shape and control but overall another convincing win. Goal scorers were Rivaldo Dju (2), Peter Michael (2) and Michael Vassiliou. Man of the Match was awarded to Alex Pike and Theo Stavrou

Mario Yiasemi’s Under 13 Gold smashed seven goals past their opposition to win 7-1. It was the team’s best performance of the season with great defending and some great attacking football. The team had to dig deep at the beginning as they pinned back in their half but once the first goal went in team they did not look back. There was some great passing today and plenty of excellent one twos between the boys. Mario was a commented how proud he was of his team. Goals were scored by Arda (2), Demos (2), Dhiren (2) and Muzzammil. Jackson was named Man of the Match who was simply brilliant! 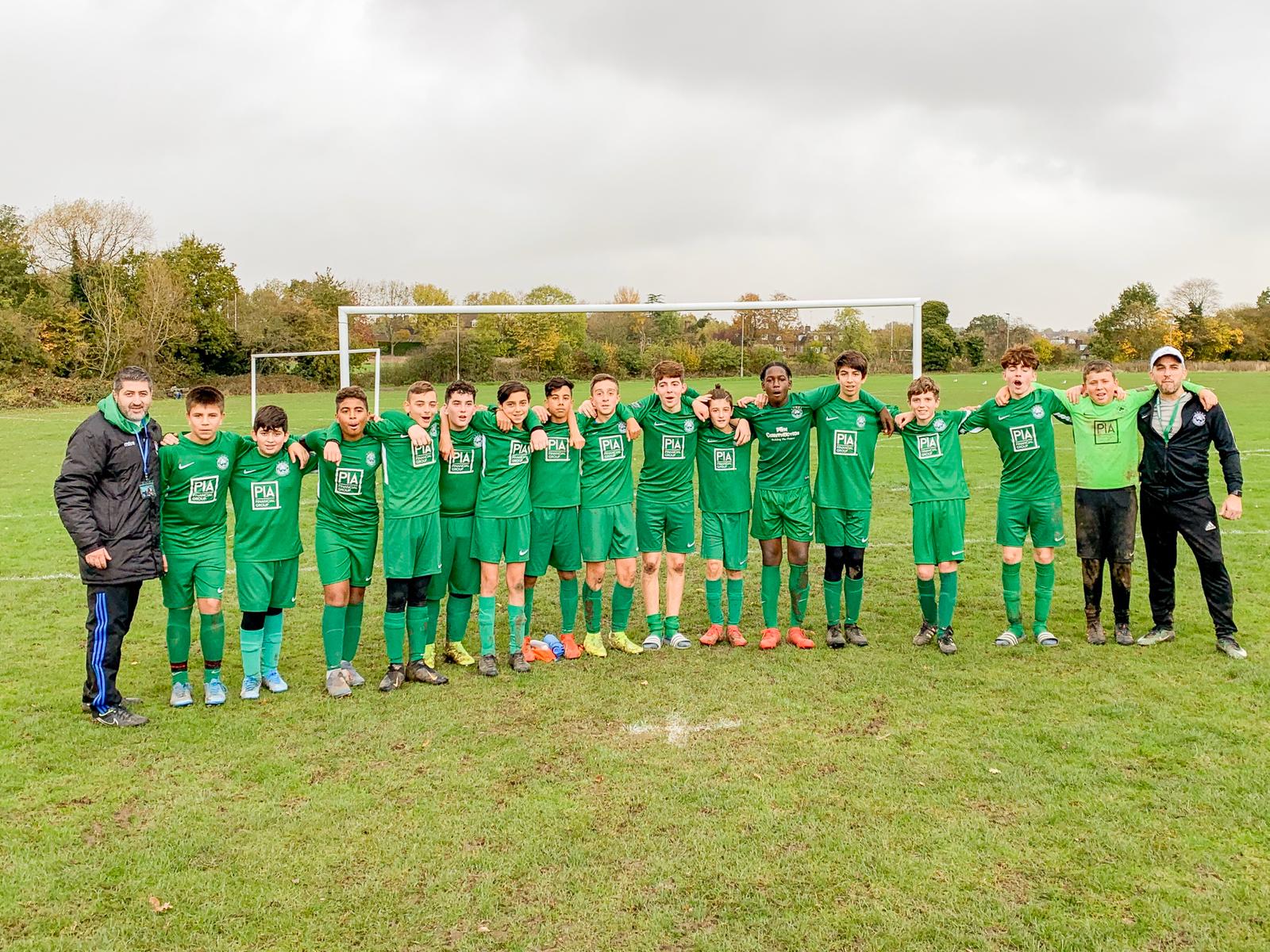 Adam Demetri and Evagoras Madrides’ Under 14 Silver were brilliant in their Challenge Cup tie as they beat a team from a higher division 4-2. The boys were very nervous in the first half and conceded in the first 5 minutes. Once the under 14 Silver stared to get their game together towards the end of the half they were rewarded with an equalising goal. A few changes were made at half time but they again conceded early in the half but settled their nerves by replying almost immediately. The rest of the half saw the Under 14 Silver show belief in each other and played some great football to put pressure on their opponents which eventually yielded a goals to give them the lead with 10 minutes to go. The boys then wrapped up the victory with another goal two minutes from time to confirm their place in the next round. Brode (3) and Nicola got the goals with Evangelos named Man of the Match.

Chris Gregoriou’s Under 18 White lost their away game 2-0. It was frustrating game where a combination of profligate finishing and excellent saves by the opposition goalkeeper, including saving a penalty, meant they could not get on the scoresheet. Chris Yiannitsarou was named Man of the Match.

Sophia Karanicholas’ Under 12 Girls were brilliant as they registered their first win of the season.

In difficult weather conditions, the girls put on their best performance yet this season. Both Sophia and coach Antonio are incredibly proud of the development of the team and during this game the girls never gave up as their positive attitude gave them a positive result. Score aside what made both coaches most proud was the opposition coaches and parents response to their “we only do positive” approach and they commended the club and its parents for the encouragement they showed towards the players which they felt distinguished they from other opponents. Sophia believes: “…this just goes to show that our Omonia Youth FC philosophy is one which leads by example!”

Robert Protei and George Constantinou’s Under 12 Gold lost 4-2 but on a horrible sloping pitch the boys played well. Small details cost the team the result but both coaches were happy that the team played well and stuck to their principles. Goals were scored Giggis and Man of the Match George Smith who played fantastically well in a defensive midfield position

Kyri Georgiou’s Under 18 Green had a tough match in their Challenge Cup tie. Having arrived at the match with only 12 players available, of which two were goalkeepers and one having to leave at half time, the team were down to the bare bones of a match day squad. In a one-sided first half, the Under 18 Green were 4-0 at the break. However, a dramatic second half recovery with the boys showing incredible character, they got back into the game and with minutes to go they were only 6-5 down. With the last kick of full time the Under 18 Green equalised to take the game to extra time. Unfortunately, playing on a very heavy, muddy park pitch and with no fresh legs to bring on, fatigue kicked in and the Under 18 Green lost 8-7. Great character and guts was shown by all the boys who played. Goal scorers were Man of the Match Rico Charalambous (2), Stel (2), Denis, Leon and Michael.

Should you feel enthused and want to know more about Omonia Youth FC, you can contact the club at [email protected], via the contact page on the club’s website www.omoniayouthfc.com as well as following the club on twitter @OmoniaYouthFC and Instagram @omoniayouthfc1994.