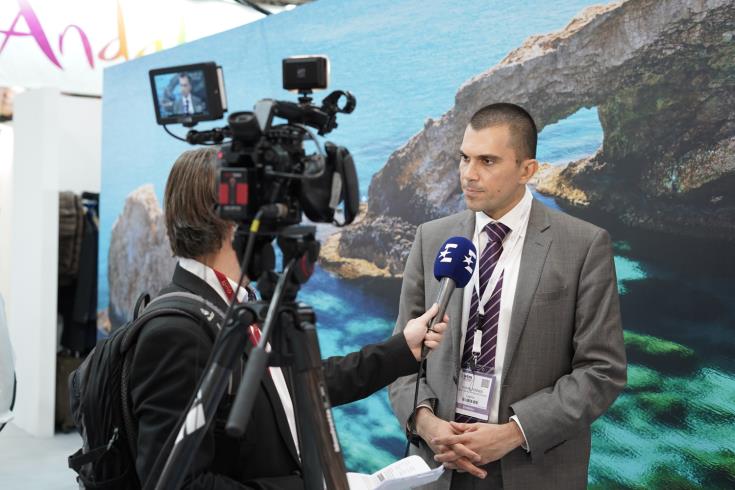 The Deputy Minister of Tourism Savvas Perdios expressed his satisfaction over the reception that Cyprus had at this year’s World Travel Market (WTM) in London, the big tourism industry exhibition which concluded on Wednesday.

Speaking to journalists in the British capital, Mr Perdios said that Cyprus has started implementing a new ten-year strategic plan for tourism, officially to be revealed later in the year, which moves the country’s touristic product beyond the traditional ‘sun and sea’ offering.

As he explained, the new plan will include steps to attract visitors aged over 50 years old, which have not been a traditional pool for Cypriot tourism. It will also include an emphasis on short breaks, on attracting visitors from new countries, such as in Eastern Europe and the Middle East, as well as tourists from further afar, Americans, Chinese and Japanese.

In this regard, he hailed the collaboration with countries such as Greece, Israel, Egypt, Lebanon and Jordan with the aim of selling joint packages, for instance in organised cruises in the Eastern Mediterranean.

The new strategic plan also includes the promotion of various thematic forms of tourism, such as biking, gastronomy, sports, health and wellness.

Responding to a question by the Cyprus News Agency, the Deputy Minister confirmed that the diversification of Cyprus’s tourism also aims at making the country a year-round destination.

“The extension of the tourism season is a dream for us. It was not possible to pursue such a dream without the solid foundation needed. Over the last decade we established the sun and sea model, which can now serve as the backbone that allows us to go for the more detailed and special forms or tourism. Already for the current year we will have an increase in winter arrivals of around 10% in relation to last year,” said Mr Perdios.

He added that the season extension will also benefit job creation and regions of Cyprus that may have been left behind in terms of tourism, such as mountainous and rural areas.

The Deputy Minister said that Cyprus is “full ready” in terms of infrastructure to welcome more tourists, citing renovated hotels, new marinas and the integrated casino resort that will open in 2021.

Perdios also expressed his satisfaction with the number of arrivals staying at last year’s levels, of 4 million, “despite challenges such as the big competition, Brexit and the default of Thomas Cook.”

He noted that the gaps created by the loss of Thomas Cook will be covered by other firms.

The Deputy Minister held around 20 meetings with airlines and travels firms during the WTM. He told CNA that what these companies asked from Cyprus is to better promote its tourism, with a new brand beyond the ‘sun and sea’ model.

He announced that this new brand will be presented next March in Berlin’s ITB travel trade show.