Tributes pour in for Amy Winehouse 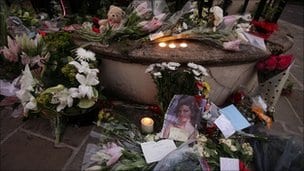 The music world has been paying tribute to singer Amy Winehouse, 27, who has been found dead at her London home.

Her former producer Mark Ronson said: “She was my musical soulmate and like a sister to me. This is one of the saddest days of my life.”

US singer-songwriter Carole King, whose song Will You Love Me Tomorrow Winehouse covered, said her death was “really tragic”.

Police said the cause of Winehouse’s death was as yet unexplained.

The Brit and Grammy award-winner had struggled with drink and drug addiction and had recently spent time in rehab.

Hip-hop producer Salaam Remi, who also worked on Winehouse’s albums Frank and Back To Black, paid his tribute to her on Twitter saying: “Very Very Sad Day. Just lost a Great Friend and a Sister.”

News of her death has prompted tributes from other celebrity friends.

TV presenter Kelly Osbourne tweeted: “i cant even breath right now im crying so hard i just lost 1 of my best friends. i love you forever Amy & will never forget the real you!”

Rolling Stone Ronnie Wood announced he was to dedicate his Saturday night show on Absolute Radio to Winehouse. He said: “It’s a very sad loss of a very good friend I spent many great times with.”

He added that a reunion performance by his former group, The Faces in Hurtwood, Surrey, would also be dedicated to the singer.

Singer Jessie J posted on Twitter: “The way tears are streaming down my face. Such a loss.”

Actress Demi Moore also wrote on Twitter: “Truly sad news about Amy Winehouse. My heart goes out to her family. May her troubled soul find peace.”

Fans have left floral tributes to Winehouse at Camden Square

BBC Radio 1 DJ Fearne Cotton wrote: “Can not believe the news. Amy was a special girl. The saddest news.”

He said she had appeared focused when giving an “incredible performance” for a recent studio recording of a duet with Tony Bennett.

“It’s deeply sad. It’s the most completely tragic waste of talent that I can remember,” he added.

Doug Charles-Ridler, co-owner of Winehouse’s favourite Camden pub The Hawley Arms, called her “a special person with a good soul,” adding, “this should not have happened”.

Her record label Universal called her “a gifted musician, artist and performer”, adding: “Our prayers go out to Amy’s family, friends and fans.”

She pulled out of a comeback tour last month after a disastrous appearance at her first gig.

Winehouse cancelled the European tour after being jeered at the show in Serbia, when she appeared too drunk to perform.

For 90 minutes, she mumbled through parts of songs and at times left the stage – leaving her band to fill in.

She had recently finished a course of alcohol rehabilitation in London and at the time was under strict instructions not to drink.

A section of the road where the singer lived was cordoned off on Saturday evening, as journalists, local residents and fans gathered at the police tapes.

Forensic officers were seen going in and out of the building.

It had been reported that Winehouse died of a drugs overdose but police spokesman Superintendent Raj Kohli said “it would be inappropriate to speculate on the cause of death.”

He added: “My sympathy extends not just to her immediate family but clearly to the thousands and millions of fans across the world.”

Winehouse won widespread acclaim with her 2003 debut album, Frank – which was nominated for the Mercury prize.

But it was 2006’s Back to Black which brought her worldwide stardom, winning five Grammy Awards.

Winehouse made her last public appearance on Wednesday night when she joined her goddaughter Dionne Bromfield on stage at The Roundhouse in Camden.

The singer danced with Bromfield and encouraged the audience to buy her album in the impromptu appearance before leaving the stage.

At the time she pulled out of the tour, her spokesman had said everyone wanted to do everything to “help her return to her best”.