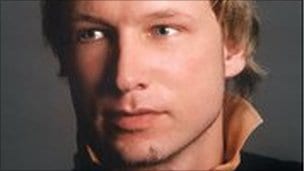 The man accused of a massacre at a youth camp in Norway and a bombing in the capital, Oslo, has admitted responsibility, his lawyer says.

Anders Behring Breivik, 32, described his actions as “gruesome but necessary”, and said he would explain himself at a court hearing on Monday.

At least 85 people died when a gunman ran amok on Utoeya island on Friday, hours after an Oslo bomb killed seven.

As Norway mourned the victims, police continued to search for the missing.

At least four people from the island camp shooting are yet to be found; it is thought some may have drowned after swimming out into the lake to escape the hail of bullets.

Police are using a mini-submarine to search for the missing bodies.

In Oslo police said the death toll could rise further as bodies or body parts were in buildings damaged by the bomb but still too unstable to search.

Police have also said another person may have been involved in Friday’s attacks, which happened within hours of each other.

“He thought it was gruesome having to commit these acts, but in his head they were necessary,” Mr Breivik’s lawyer Geir Lippestad told Norwegian media.

Mr Breivik’s lawyer, Geir Lippestad, said the attack had been planned “for some while”

He added that the actions had been planned for some time.

Mr Breivik has been charged with committing acts of terrorism, and is due to appear in court on Monday when judges will decide whether he should be detained as the investigation continues.

The suspect is reported to have had links with right-wing extremists.

Still pictures of him, wearing a wetsuit and carrying an automatic weapon, appeared in a 12-minute anti-Muslim video called Knights Templar 2083, which appeared briefly on YouTube.

A 1,500-page document written in English and said to be by Mr Breivik – posted under the pseudonym of Andrew Berwick – was also put online hours before the attacks, suggesting they had been years in the planning.

The document and the video repeatedly refer to multiculturalism and Muslim immigration; the author claims to be a follower of the Knights Templar – a medieval Christian organisation involved in the Crusades, and sometimes revered by white supremacists.

Police have not speculated on motives for the attack but the bomb in Oslo targeted buildings connected to Norway’s governing Labour Party, and the youth camp on Utoeya island was also run by the party.

In the document posted online, references were made to targeting “cultural Marxists/ multiculturalist traitors”.

Thorbjorn Vereidi: “We were attacked by an insane maniac”

“He has had a dialogue with the police the whole time, but he is a very demanding suspect,” police chief Sveinung Sponheim said.

Norway has had problems with neo-Nazi groups in the past but the assumption was that such groups had been largely eliminated and did not pose a significant threat, says the BBC’s Richard Galpin, near the island which remains cordoned off by police.

Stunned mourners gathered around a make-shift shrine in Norway’s capital ahead of a special service to be held in the city on Sunday, that thousands are expected to attend.

A number of Muslim mourners also made their way into the church to pay their respects, says the BBC’s Stephen Evans in the city.

One, who gave his name as Ali, said many initially assumed the bomb was the work of al-Qaeda.

“Norway is a country that accepts everyone,” he told the BBC. “It welcomes everyone and then when I saw it was Norwegian who did it, I was really shocked. He is filled with hate.”

“We will do whatever we can to give them as much support as possible,” said Mr Stoltenberg of the families affected.

The attacks sparked strong international condemnation, with US President Barack Obama expressing his condolences and offering support, while Britain’s Queen Elizabeth also spoke of her shock and sadness in a letter to King Harald.

The Utoeya island shooting came just hours after the initial massive blast in central Oslo, which police say was caused by a car bomb.

Eyewitnesses on the island have painted a horrifying picture of events as a tall, blond man, dressed as a policeman, asked people to gather round and then opened fire indiscriminately.

While some were shot at as they tried to swim to safety, others cowered in undergrowth, hid in buildings, or pretended to be dead amid the bodies of other victims as the gunman continued his rampage.

Police said they took 45 minutes to reach the island, and the suspect was apprehended 45 minutes after that, surrendering when approached by armed officers.

He is reported to have been armed with two weapons, one of them an automatic rifle.