His foundation has urged people to do 67 minutes of voluntary work on the day – to represent the 67 years he devoted to South Africa’s political struggle.

The anti-apartheid icon is expected to spend the day with family in his home village of Qunu in the Eastern Cape.

Millions of school children have simultaneously sung him a special birthday song.

It is not clear whether the target of 12.4m was reached to set a new world record.

They sang Happy Birthday Tata Madiba – a song specially composed for his 93rd birthday at school assemblies across the country.

Mr Mandela, who is a hero to many in South Africa and around the world for his long fight against white minority rule, has appeared increasingly frail since he retired from public life in 2004.

He has been receiving round-the-clock medical care at home following his release from hospital in January where he was treated for an acute respiratory infection, says the BBC’s Nomsa Maseko in Johannesburg.

Known to South Africans by his clan name Madiba, Mr Mandela has not appeared at a public engagement since the closing ceremony of the football World Cup in July 2010.

A photo released ahead of his birthday shows him smiling and surrounded by members of his family. 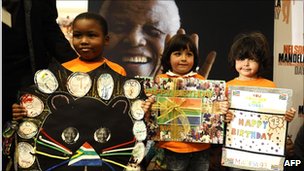 School children have made birthday cards for Mr Mandela

“If a man could dedicate 67 years of his life to doing good for the world, imagine what we could achieve if everyone just gave 67 minutes of their time to do the same,” said Said Achmat Dangor, the head of the foundation.

South African companies, charities and celebrities have all announced plans for voluntary work they will do on the day.

Mr Ban urged others around the world to do the same. “The best way we can thank Nelson Mandela for his work is by taking action for others and inspiring change,” he said.

In a statement released ahead of the occasion, US President Barack Obama said Mr Mandela’s life and legacy exemplified “wisdom, strength and grace”.

His wife, Michelle Obama, and daughters met Mr Mandela last month in Johannesburg during a visit to South Africa.

Mr Obama said his family’s time with Mr Mandela was “the most moving part of their trip”.

Mr Mandela stood down as South Africa’s president in 1999 after serving one term, handing over to Thabo Mbeki.

After leaving prison in 1990 following 27 years in jail, he led the African National Congress party to a landslide victory in 1994 – the first time South Africa’s black majority was allowed to vote.