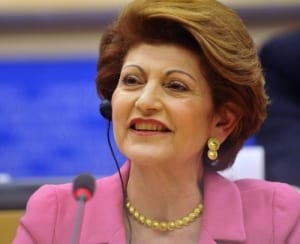 Cypriot EU Commissioner for Education, Culture, Multilingualism, Sport, Media and Youth Androulla Vassiliou described the Cypriot Presidency of the Council of the EU in the 2nd half of 2012, as a golden opportunity for Cyprus to establish its role as a bridge between East and West.

She underlined that it is crucial for the Cypriot Presidency to be successful so that Cyprus will be consolidated as an EU member state which manages major issues with success.

In an interview with the Cyprus News Agency, Vassiliou also pointed out that the Cypriot Presidency constitutes an opportunity for the Cypriot people to come closer to EU and for the Cypriot society to start moving in European mode.

The Cypriot EU Commissioner underlined though, with regards to the recent developments within the Secretariat of Cyprus Presidency and the subsequent resignation of its Head, that we have delayed and that preparations are not advancing with the appropriate pace. She indicated that the President of the Republic should soon appoint the new Head for the preparations to advance rapidly.