THE UK-based company funding the construction of a marina in the north has said the project is contributing to a solution of the island’s political problem, as it prepares to open for business this month.

The project, built on Greek Cypriot land near the village of Yialousa on the Karpas peninsula, is funded by the Lewis Trust Group (LTG).

“The political issues are beyond and above [the company], but we believe that by creating such a development we are contributing to a solution, and not the other way round,” Liza Singer, the group’s representative told the Sunday Mail. “We are talking about an honest developer who is coming with his experience and money and knowledge to built a touristic development and introduce a new sector to a remote part of the island for the benefit of the island as a whole, with the vision that a prosperous north will lead to a prosperous, peaceful island.” 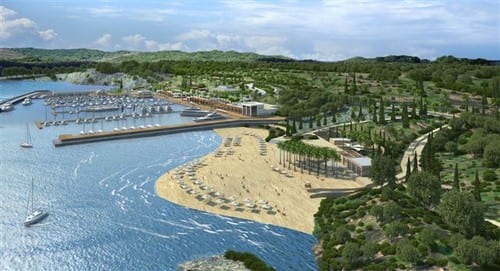 The political ramifications for the Greek Cypriots of the Karpaz Bay 270-donum marina is being handled by the Cypriot foreign ministry. The minister could not be reached for comment yesterday, but a government source said that when such issues arise, Cyprus usually files protests mainly with the UN, the EU or individual countries.

Beyond the political and potential legal implications, there is also the impact the project would have on the environment.

Environmentalists in the north believe the whole area from Yialousa upwards will be opened to developers. They are particularly concerned about the unspoilt Golden Sands Beach near Apostolos Andreas.

Head of the north’s Green Action Movement (GAM) Dogan Sahir is convinced the Turkish Cypriot authorities have long abandoned the national park idea and have secretly earmarked the area for tourist development.

“Why has the government provided electricity for 20,000 people in an area designated as a national park?” Dogan Sahir, the head of Green Action Movement, said.

Environmentalists tried to stop the plans to extend the power grid in 2008 but to no avail.

“We fought against this but lost,” Sahir said, adding however that they planned to take their fight to the European Court of Human Rights.

The ‘soft’ opening of the Karpaz Bay Marina is scheduled to take place later this month, when the marina itself will be open to yachters.

The project is believed to be the biggest investment by non-Turkish foreign investors in the north.

The development envisages a massive complex housing a marina, a four and a five-star hotel, two spas, a conference centre, a casino and a number of bars and restaurants.

It is rumoured LTG paid around $10 million for the plans and the lease of the land.

The marina will boast some 300 berths and have access to an expansive 18,000sqm dry dock for refit and repairs to aid with both maintenance and storage. Another enhancement is a 300 tonne crane.

Interviewed by the Mail a few years back, David Lewis of LTG had said he was not aware the 270-donum land was Greek Cypriot but added that, “if they [Greek Cypriots] get the land back, they will be entitled to the rent. I see this as a form of natural justice”.

Asked whether he harboured worries the site could be contested by Greek Cypriots claiming ownership, Lewis said, “I am sympathetic to anyone dispossessed of their lands as a result of the invasion. They, Greek or Turkish Cypriot, should be compensated or get their lands back.”

The group’s real estate unit has more than 300 million sq. ft. under management in the UK and US. Lewis Trust Group’s hotel operation comprises more than 20 hotels in Israel and Spain. The Lewis family owns a large majority of the company; Managing Director Bernard Lewis holds the biggest share.