President of the Republic Demetris Christofias said on Thursday that sports are culture and called on the police to find those guilty of causing incidents before and after Wednesday`s Football Cup final, between Apollon v Omonia and take them to court.

Addressing the annual celebration of the Football Association in Nicosia, the President expressed hope that measures would be taken by all involved parties to curb violence. “Football is called the king of all sports. Of course, many times this king is dethroned and humiliated due to violence and hooliganism, which unfortunately has passed into our country, into our football pitches,“ he said.

He noted that he would have liked to watch football matches but avoids going to the stadium because of the violence. President Christofias furthermore congratulated the four football teams that would be participating in European events, wishing them every success, and praised all Cypriot athletes for their international achievements.

He also assured that the government, despite the problems, was trying to show understanding and embrace football and all sports, which cultivate health, adding that sports are culture and should be promoted as such.

Police arrested late yesterday evening a 26 year old from Saint Dometios and a 24 year old from Latsia to facilitate investigations in connection with an organized attack in a restaurant in Nicosia, after the game. 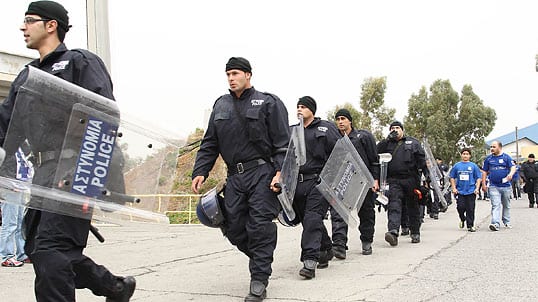